When we founded Garage48 back in 2010 we had one idea in mind – we wanted to show that launching a new startup is much easier than people may think. Since then many things have changed, but our goal to promote startup culture to larger audience in the Baltics and developing markets has remained the same. And something what started as a one-time event in Tallinn, Estonia, has grown into a truly international startup movement. 2014 was the best year ever for Garage48 – with the record number of events, participants, new formats and new markets.

In 2014 we had the record number of hackathons – 14, with whopping 1,116 participants. As our team is very small (today we have a full time staff of three people, but also many great volunteers and mentors), we don’t want to increase the number of events per year too fast. That is the reason why we consider 14 events a very big number for us. Our goal is to offer Garage48 event participants the same kick-ass feeling in all our activities, not depending on whether it’s happening in a dark Nordic winter weekend in Tallinn or in a super hot east African city Kampala, Uganda. So our team is always personally around in our events, making sure we deliver the highest quality.

This year we entered new amazing markets like Moldova, Georgia, the Palestininian territories, Oman and Georgia. In many ways our first event in Muscat, Oman, was very memorable. Coming from Estonia, a cold Nordic country, our team learned a lot about the Middle East culture and the Arab countries, the hospitality of all the people we met and how they approach the entrepreneurship with a little different twist. This made us realise that the Arab market is pretty untouched by the startup community. Because of this and amazing local partners, there will be more events in Oman – and the countries close by – very soon.

Personally, I am extremely happy that in 2014 we were back in Ukraine, where we visited the beautiful Lviv for the first time. We are planning to organise more events in Ukraine in 2015, as this country has a huge potential to grow to an amazing community of startups. In 2015 we will have events in Kiev, but also in the charming Odessa. In 2014 we continued our cooperation with Belarus by organising events in Minsk and, for the first time, in Vitebsk. I have to mention that this country is still quite a challenging place where to organise events.

After a three-year break we went back to Africa – we had (and still have) the second best event in Kampala, Uganda. This time it wasn’t just a weekend hackathon focusing to motivate women to come out with ideas, but a longer volunteer project that focuses on doing practical trainings, workshops and mentoring the potentially successful startups. The designer, Garage48 volunteer and mentor, Helen Kokk spent thre months in Uganda teaching UX and designer skills to local startup entrepreneurs. Another designer, Garage48 volunteer and mentor, Jaanus Sakkis, just returned to work on similar goals and grow the local Design Uganda community. We are confident that practical workshops are the best possible way to improve and grow the startup community in Uganda. 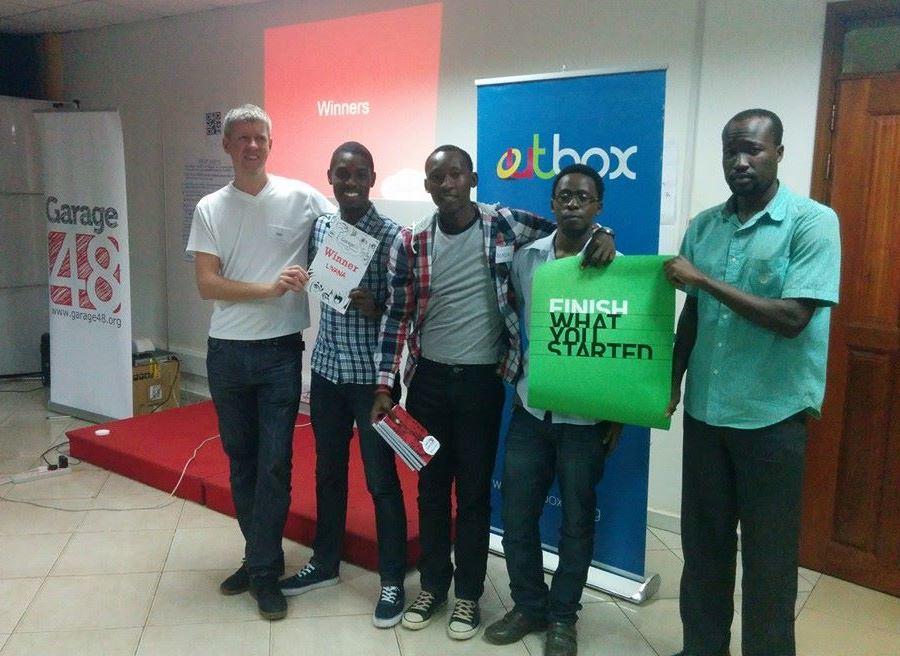 And now about Estonia, where we had five events in 2014. This is a remarkably huge number for a country that has the same size as just one borough in Sao Paulo, Brazil. Our home base and a good ground to test different ideas, we introduced a new format for events – one of them a weeklong startup camp for IT and business students. The Student Startup Camp took place in February in cooperation with the University of Tartu. After it proved to be very successful, we organised a second event in October in Moldova together with the Technical University of Moldova and the USAID CEED II project. Compared with our “usual hackathons content”, the camps include more practical lectures and workshops in addition to the main goal “build your product”.

In February our co-founder Priit Salumaa introduced another new format – an event where software, hardware and art is combined. That’s how Garage48 Hardware & Arts was born. Despite many fears and risks (this event has way bigger costs and more challenges for the organising team and the participants) it ended up being our most successful event ever. The event had a record number of prototypes and the participants and teams were really experienced and eager to achieve good results. A year after the first hardware event, six teams out of 20 are still alive, teams have founded real companies and they’re working to bring their innovative products to the market. Usually only one or two teams will turn a weekend hackathon experience and prototype into real company, so 30% success rate is super high. 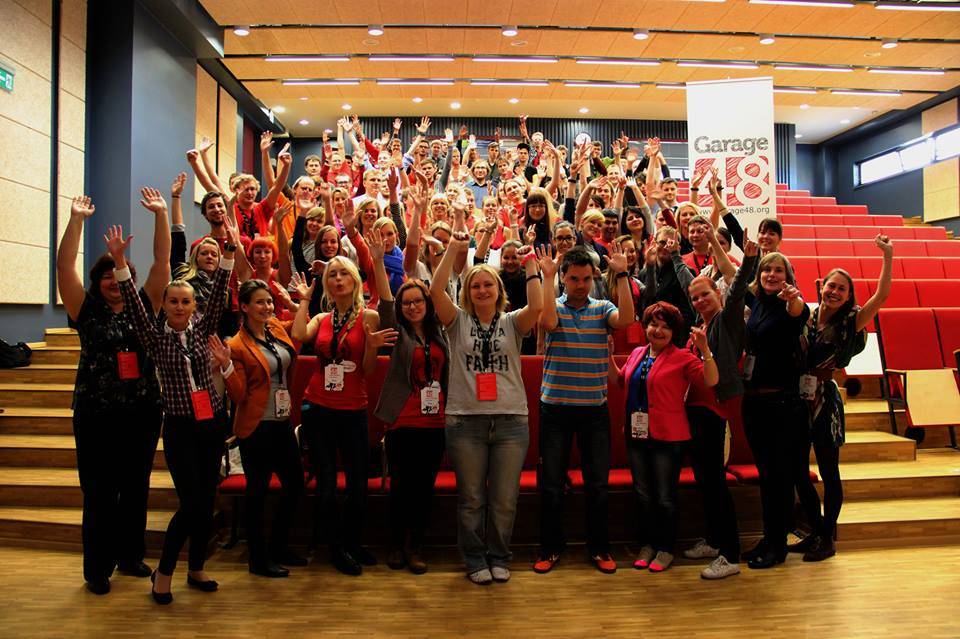 In November 2014 we had another special event in Estonia – Garage48 Enable Tallinn that focused on joining forces with people with disabilities and introducing the needs and opportunities of the technological world to make daily life easier for many people. It ended with 10 prototypes and a huge amount of positive emotions. The organiser of the event, Maarika Susi, described it as the warmest and most positive event after 20 events she has helped organise. Maarika also organised a Health & Wellness special event in Tallinn during the Estonian ICT Week and Pärnu Women Special in autumn, which had a record number of women participating and great teams. All this experience will surely keep her working with special events in 2015, first of them focused on clean technologies and environment on 8-10 May in Tallinn.

Last year we had only one event in Latvia – focused on gamification and entertainment. But our friends from the “Latvian Mafia” promised that in 2015 we will have at least three awesome events: Hardware & Arts will be the first full-fledged hardware hackathon in Latvia, while Open Data and Public Services will be aimed to open up the data vaults of municipalities and government to build services for the society, and you can expect also an open event for all types of ideas.

As all our main markets are small, we started to link communities between countries more actively. As a result we had a growing number of participants who travelled from or to other country, just to take part in our events. In one Estonian event we had participants from 10 countries. We also stepped in and twice organised the startupbus from the Baltics to our events in Belarus – both in Minsk and Vitebsk. We also had a bus from Riga to our first hardware hackathon in Tartu, Estonia. I strongly believe that the more we are connecting small neighbouring countries like the Baltics, Belarus and Ukraine, the more we successful startups will we have from this region. And we have already one very good example out of this cooperation, as one of our most successful alumnis, Trackduck, has great mix of founders – the CEO and marketing power from Lithuania, and technical talents from Belarus.

Many people keep asking me how our top teams are doing after the event. Unfortunately, we don’t have daily data from all of our teams and participants. But according to my information, VitalFields (Estonia), TrackDuck (Belarus-Lithuania), Qminder (Estonia), Metricscat (Belarus) and myTips (Ukraine) have found investors and their revenue is growing. 2013 alumni GoWorkaBit (Estonia) entered the Finnish market recently and our 2013 alumni Taxify, co-founded by a Garage48 co-founder, Martin Villig, was chosen as the best Estonian startup in 2014 just a few weeks ago.

As I mentioned, Garage48 has a pretty small team. None of these magical events couldn’t have happened without the people behind the Garage48 Foundation. I want to personally thank Krists Avots, who was leading our daily operations; Karin Rand, who made a huge improvement in the foundation’s financial side; Jane Muts, who improved our co-working space HUB in Tallinn – both in the overall quality but also in the financial side. My very special thanks goes to Maarika Susi, who organised so many events! And last but not least – we were helped by an amazing army of volunteers. I would like to bring out our most active volunteer Triin Liiv, who is leading our social media, and Alvo Aabloo from the Tartu University and Anu Piirisild from the Estonian Academy of Arts, who are helping passionately with our Hardware & Arts hackathons. And my younger sister Elise Sass, who acted both as a team member, a volunteer and a mentor. 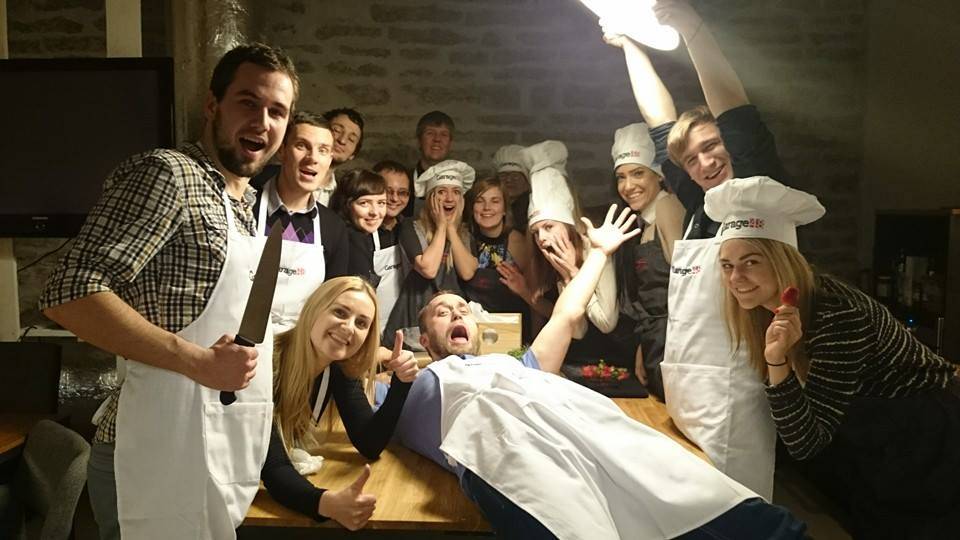 But we cannot create any or our events without super-skilled mentors. And as the master brains behind Garage48 are active entrepreneurs, we choose mentors very carefully, making sure they have relevant experience. Looking back at 2014, we had several tens of them. This time I will personally thank Helen Kokk, Maret Kruve and Maido Parv, who helped countless teams with design; Jaan Kruusma, who opened the magic behind marketing; and Martin Grüner, whose technical experience solved many problems that the teams faced.

All of this couldn’t have happened without our sponsors and partners. We want to thank you all for contributing to the events, especially: Microsoft, Estonian Development Fund, Credit24, Enterprise Estonia, the US Embassies in Tallinn and Kampala, the Embassy of Kingdom of the Netherlands, the Estonian Ministry of Foreign Affairs and the Estonian Development Cooperation, ITA in Oman, the University of Tartu, the Estonian Academy of Arts and Startup Vitamins.

In 2015, this great team will continue to improve and participate in the startup community in Eastern Europe, Africa and also in the Middle East. If I look at our events roadmap today, there are some pretty good surprises for 2015 and I can promise that despite of our four years of age, Garage48 keeps challenging itself every week  – we still feel like a startup itself.

It’s not too late to join the startup revolution – our next event will take place in just a few weeks in Tartu. Join the Garage48 Hardware & Arts from 6-8 February – registration is open.

Ragnar Sass is a serial startup entrepreneur and cofounder of a simple CRM software called Pipedrive and a startup boot camp Garage48. He has organised several Hackathons, including Garage48 in the Baltics, West & East-Africa and Middle East.