Simone Cassano, an Italian from the Puglia region, opened a bar in the Karlova area of Tartu, the second-biggest town in Estonia, where Estonians stop “being Estonians” – they actually talk!

When Simone Cassano moved to Estonia to start a family with his girlfriend, he traded the year-round warmth and picturesque Adriatic coastlines of his native Bari, Italy, for the long, dark and cold winters and short summers of the northernmost Baltic country. He also left behind a culture and people who are among the most gregarious in the world to join a society that many consider an “introvert’s paradise”.

It would be unfair to characterise Estonians as “cold”, but they are certainly reserved. They don’t make a lot of noise (in public anyway,) and will rarely begin a conversation with a stranger. There’s a lot of debate about what and who Estonia and the Estonians are – Baltic? Scandinavian? Northern European? But one thing an Estonian will never be mistaken for is an Italian.

However, Cassano has created a place in the Karlova neighborhood of Tartu where Estonia and Italy converge, mingle and form a unique synergy that is bringing out the best in a once sleepy part of the city made of 19th century wooded homes and tree-lined streets with brick and cobblestone sidewalks. 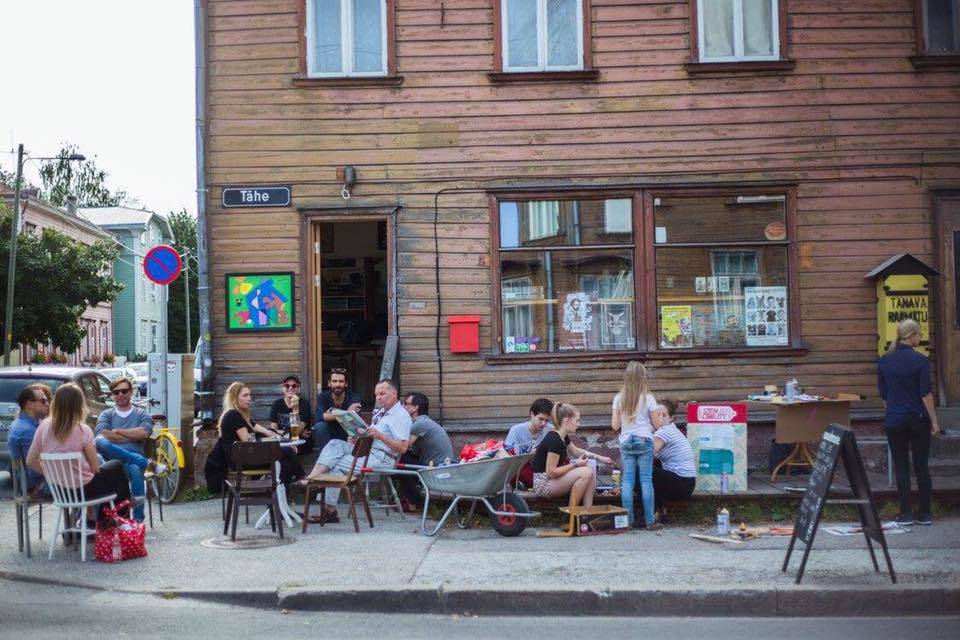 I discovered Karlova in 1996 on my first trip to Estonia. I was in Tartu as a student missionary for the summer, working with local churches that were emerging out of the shadow of a half-century of Soviet oppression. For several weeks I taught English in the mornings at a small prayer house on Võru Street and spent the afternoons on a construction site for the new Salem Baptist Church building on Kalevi Street. If I had extra time between the two projects, I would often take meandering walking detours through different neighbourhoods to get from one place to the other (this was before GPS and smart phones, so I would walk in the general direction of where I knew I needed to be). When I found Karlova, I was mesmerised.

The homes weren’t necessarily colourful, but you could tell from the chipped paint that they had been at one time, and might be again. In those post-Soviet years, some had yet to build indoor plumbing, so there were outhouses throughout the neighbourhood. It wasn’t unusual to see elderly ladies outside beating dust off carpets and tending to gardens. It was quaint, nostalgic and, like most places in Estonia, quiet. But there was something else there. Something unseen. They say there is a “Spirit of Tartu”, and although the maxim often refers to the life the University of Tartu brings to the city, I sensed the spirit as present in Karlova as anywhere else.

There was an almost-vacant house in Karlova he had his eye on. It was partially occupied by a carpenter when he began to dream about what it could be. The carpenter vacated the building, two of Simone’s friends talked him into leaving his job teaching Italian in Tallinn and Tartu to become business partners, and in the fall of 2015, a bar was opened. He named it “Barlova”. 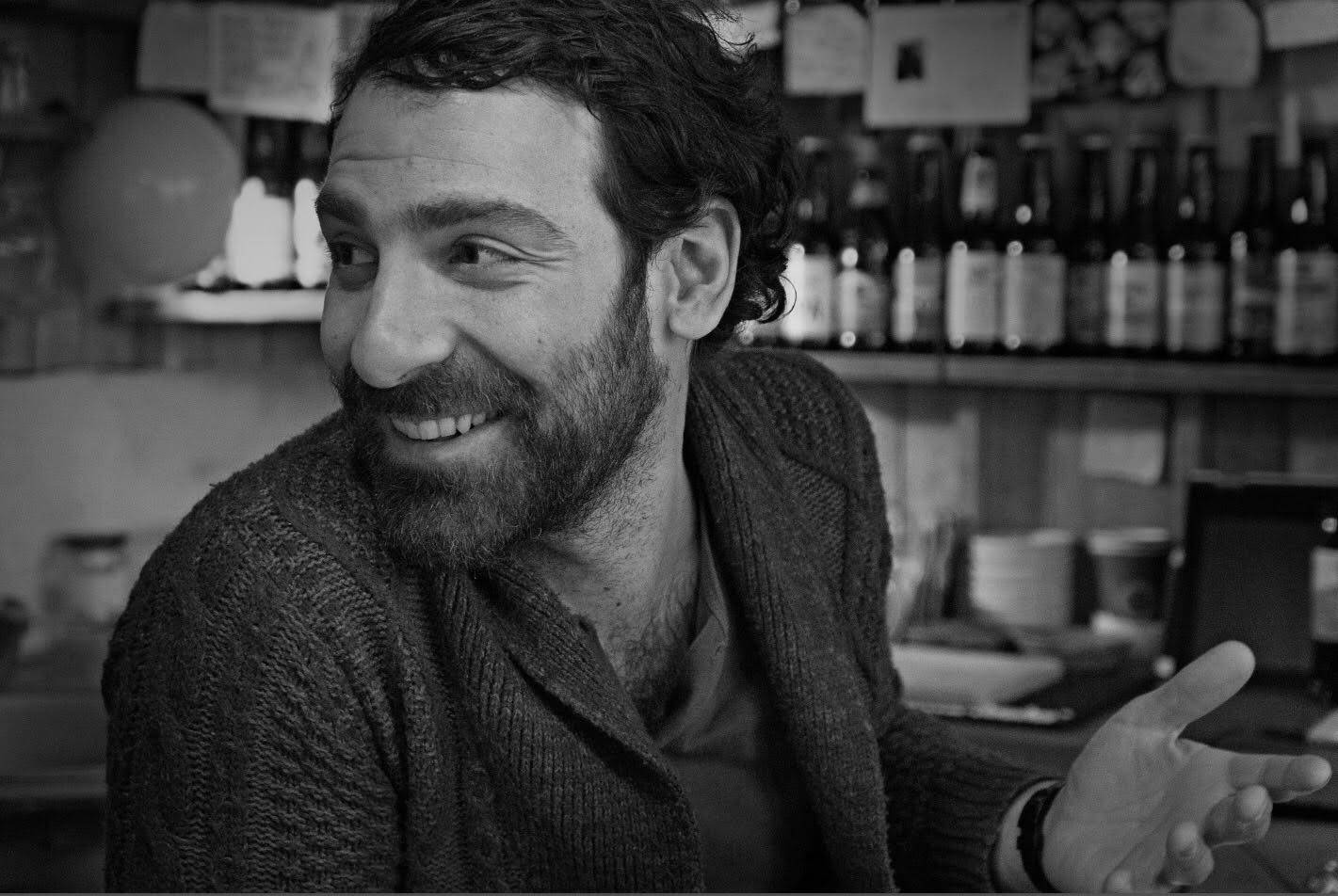 Since Barlova opened, it has anchored an economic and cultural boom period occurring on Tähe Street. In addition to the restaurant, Anna Edasi, and the coffee shop, Karlova Kohv, Barlova has brought the residents of Karlova, which include old-timers, young families, and students at the nearby Tartu Art School, out of their homes, out of their shells, and into each other’s lives in ways that isn’t stereotypically common for Estonians.

When I began planning my fourth trip to Estonia to experience the centenary celebration in February, I made a decision to plant myself in Karlova, to immerse myself in the life of the neighbourhood. When I read about Barlova (which opened just a few weeks after my last trip in the summer of 2015,) I knew I wanted to be a fly on the wall of this unique gathering place. What I discovered was a treasure trove of people and stories that have found a home in Estonia’s “second city”.

The first thing to note about Barlova is its aesthetic. The bar occupies the southeast quarter of a two-story wood-slatted structure in a residential area. This was one of the first things that intrigued me, as neighbourhood bars in older communities are almost unheard of where I live in Texas, and are rapidly dying in other parts of the US, where zoning restrictions quarantine businesses (especially those that sell alcohol) into areas further and further away from where people live. 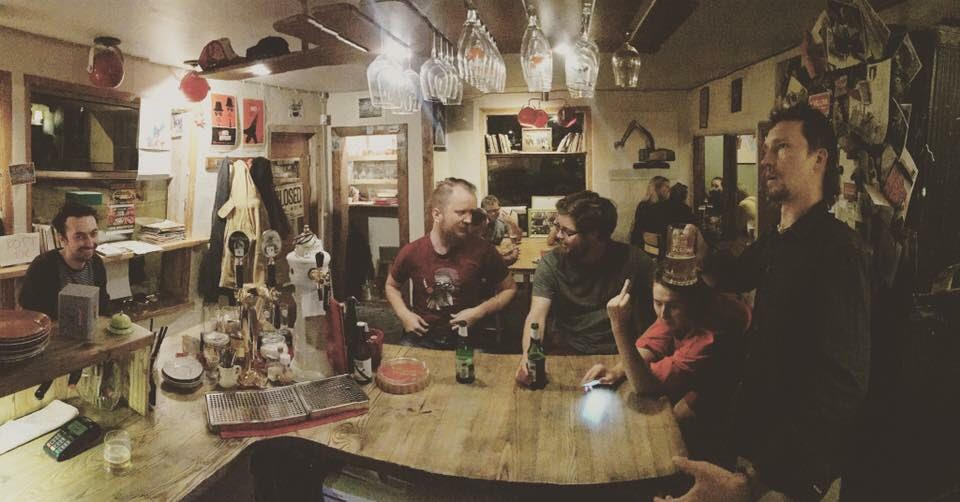 Aside from the small, square bar in the front room, the place looks like a vintage coffee shop with comfortable chairs and couches to linger in, local artwork dotting the wall, and a collection of quirky books to flip through (Barlova actually doubles as a coffee shop, selling espresso drinks, tea and a small selection of pastries, in addition to beer, wine and liquor). In a small corner near the bar, a drawing of Italy, with Bari (the capital of the Puglia region in southern Italy – editor) highlighted, is tacked on the wall, presumably to make it easier for Simone Cassano to more easily tell customers where he is from.

In warmer months, the outside sidewalk is dotted with chairs and tables to soak in the sunshine, which must be hoarded in Estonia, as it is a rarity. But during my February visit, customers got out of the cold, snowy streets as quick as they could, only to walk out for a smoke or to leave. 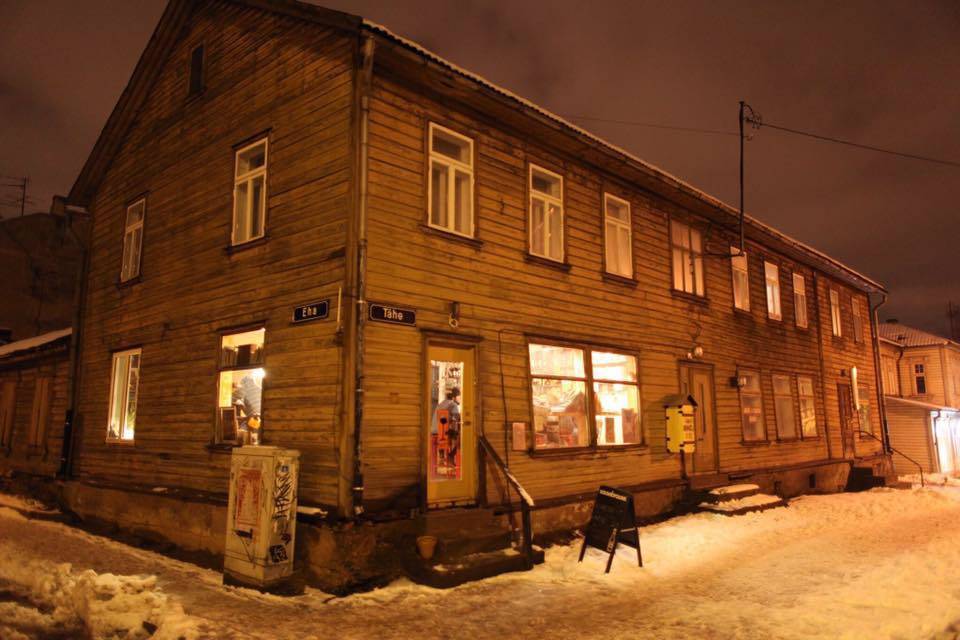 The Barlova clientele does skew younger, but there is a solid amount of older men and women who frequent the bar. Families who live in the neighbourhood, students at the art school and blue-collar workers on their way home from a long day of work are all part of the tapestry of personalities who walk through the doors. Most of them know each other from the bar. In a conversation I had with Simone, he noted that he had seen many people “stop being Estonian” when they came to Barlova. I understood what he meant – that the stereotypical Estonian trait of being quiet and standoffish didn’t seem to apply at the bar. 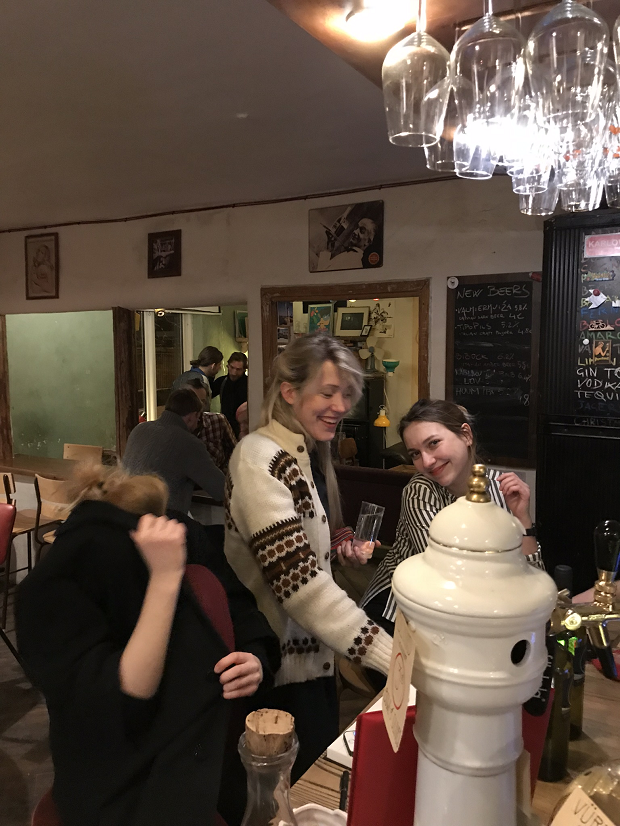 At the same time, one could be appropriately “Estonian” there as well, without judgment. I saw many individuals enjoying a beer or coffee by themselves, silently staring in the distance or eavesdropping in on conversations without plans to join in. This is a luxury that is hard to experience in an American bar, where “Estonian behaviour” will make people wonder what’s wrong with you.

But without question, the real stars of the show at Barlova are the staff Simone has assembled around him. They were all either friends or acquaintances of his before the bar was opened. One of them, Elina, can’t even remember when she started working there. She was a regular and slowly started stepping behind the bar to help pour beer for customers during busy times. Eventually she realised she worked there. She, along with Simone, Rivo, Maris, Marili, Kristen and Meriliis have formed a family with each other and with Barlova regulars that is compelling and endearing.

This is most evident during the evening shift change, when a sort of dance occurs. I doubt the ritual has ever been formalised but can easily be observed after a handful of times visiting Barlova in the evening. When the night relief comes in, they are greeted (as are the regulars) with a “Ciao, _____!” from Simone, if he is there. They then share hugs with each other, without anyone being left out. All this goes on without a break in the work. Dishes are being washed, orders rang up and served. In the midst of the chaos, Simone pours shots to be downed by the departing and incoming workers. Often, he’ll pour an extra for a regular, and I felt a tinge of pride every time I was included. 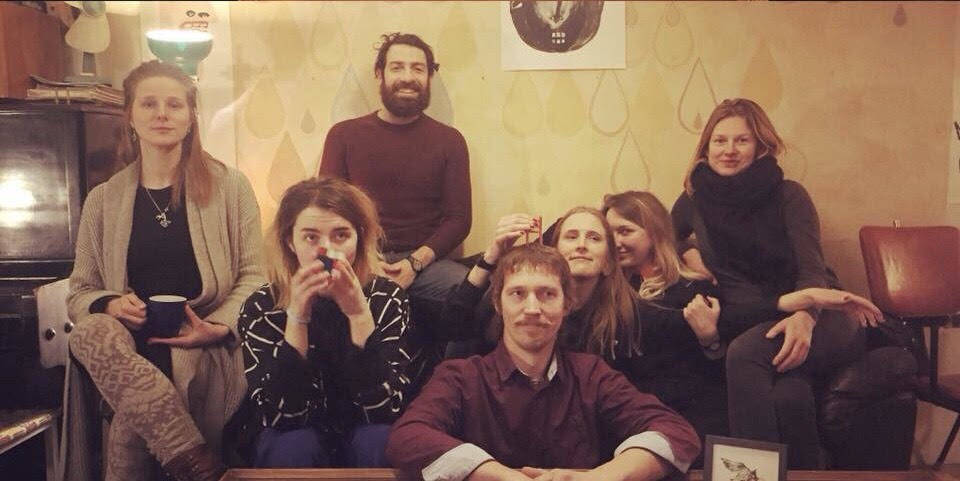 Tartu is the heart and soul of Estonia

There’s a language dance that occurs during this time as well. Like most places in Europe, it isn’t uncommon to hear English and the native language being used interchangeable. But because of Simone, Italian is thrown into the mix at Barlova. One night I witnessed a series of overlapping conversations that moved effortlessly between Estonian, English, Italian, Finnish and Russian. All this was without any anxiety or fear of being left out, which often occurs when people are speaking a language you don’t understand. It was a testimony to the place of warmth and comfort that Simone Cassano has created in Karlova.

On the first day of my trip, I told a Barlova regular that when I am in Estonia, I only ever want to be in Tartu, even though Tallinn is the place for tourists. This earned me a giant hug from a stranger, which is uncommon from Estonians. On my last day before returning home, I had the honour of having my picture taken “under the bar”, which has become a rite of passage of sorts for regulars. I felt as if I had been grafted into a family in a remote corner of the world. I believe Tartu is the heart and soul of Estonia, and as I reflect on my recent trip, I wonder whether I have found the heart and soul of Tartu? 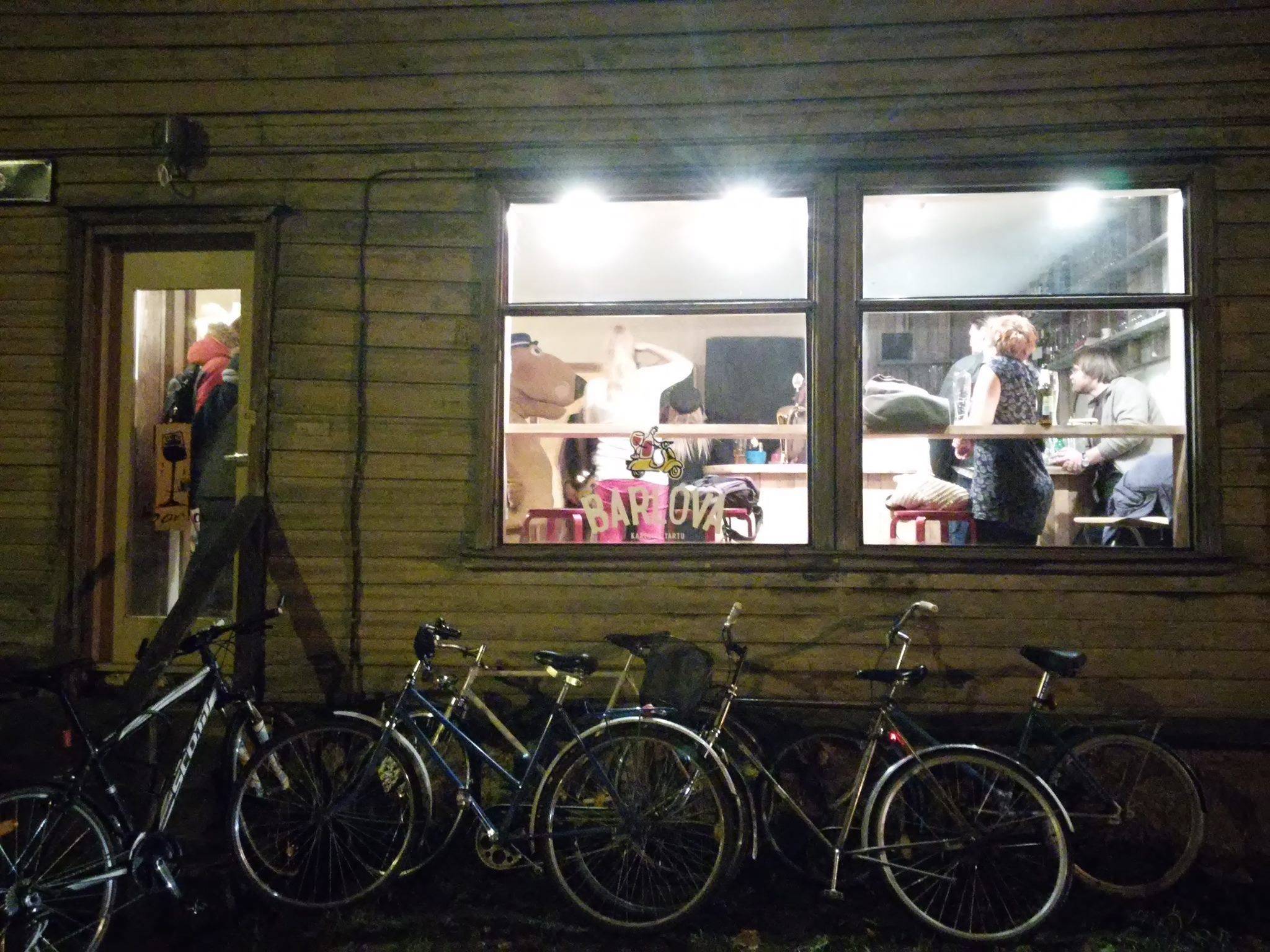 Craig Nash lives in Waco, TX, where he works for a non-profit organisation that addresses the issues of hunger and poverty in Texas. He has a special love for Estonia and visits Tartu for at least a couple of weeks each year. In addition to his work, he enjoys writing about politics, religion and country music.