The Estonian economy is in its best position since the financial crisis of 2007-2008, the country’s central bank announced, adding that the total output in the economy in the third quarter of 2017 was 4.2% higher than a year earlier.

According to the Bank of Estonia, the Estonian economy has been gaining in strength throughout 2017. “Output volumes grew in most sectors in the third quarter and total output in the economy was 4.2% more than a year earlier,” the bank said in a statement. “The economies of Estonia’s main trading partners and other countries in Europe have grown more than was previously expected, and this has given a boost to the Estonian economy as well.”

“It is forecast that Estonian economic growth for 2017 as a whole will exceed 4%, which is the fastest rate of the past six years. The economy will also grow by more than 4% in 2018, but then growth will slow as the boost from foreign markets fades and production capacities approach their limits.”

Growth is driven by demand

The central bank said that strong demand in Estonia and in foreign markets had pushed the Estonian economy above its long-term sustainable level. “Although it is not possible to measure long-term sustainable growth or the consequent size of the economy directly, low unemployment, a rise in the number of unfilled vacancies, increasing labour shortages, strong wage growth, and rising inflation all indicate that the economic cycle has reached a point where growth is being driven mainly by demand, not by increases in the production capacity of companies or in labour productivity. Productivity has grown a little faster in the past year, but the rate of growth is still lower than in the previous decade.”

“Upward pressure on wages will be weaker in the near future, but only for the time being,” the bank also said. “Pressure will be eased in 2018 by the income tax reform and smaller rises in the minimum wage than earlier, [al]though in subsequent years wage competition will start to increase again. Although labour costs have risen strongly for a long time now, the wage level in Estonia is still only about half of the European Union average, and as large differences remain in income levels, so upwards pressure on wages will remain. It is hard to fill vacancies in low paid jobs as they are not competitive in the labour market.” 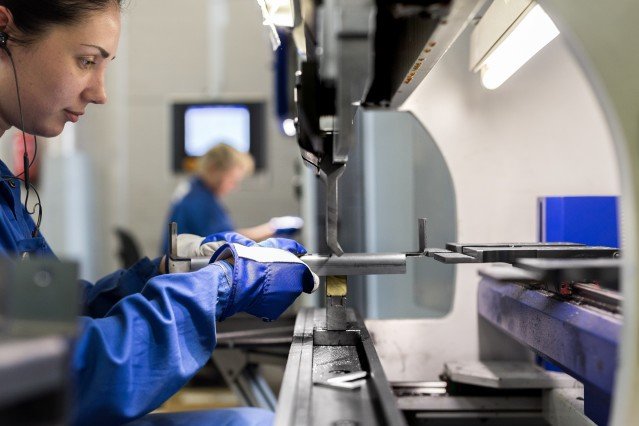 No signs of a sharp stop to growth

Also, there is nothing evidently apparent in the domestic economy that could bring a sharp stop to growth in the economy. According to the Bank of Estonia, the main risks come from the pressure on labour costs that have been noted for some time already and that threaten the international competitiveness of companies, and from the recently emerged danger of overheating in the construction sector. “Even if the rise in labour costs is based on excessive optimism however, wages are likely to adjust smoothly as the financial indicators for companies are strong enough to let them survive such pressure and they are evidently in better condition than before the last crisis.”

The bank also said inflation would fall in the coming years. “Consumer prices grew at close to 4% over the year in the last months of 2017, but this will fall to close to 2% in the years ahead.”

The cover image is illustrative (photo by Rasmus Jurkatam).