Ardo Hansson, Estonia’s member of the European Central Bank’s governing council, said on Saturday that Europe’s situation appears to be taking a more positive turn in recent months, but he advocated for a patient approach when it comes to implementing restructuring measures and creating new institutions. 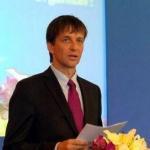 “There have been more positive news during recent months,” Mr. Hansson said in an interview following a speech at a conference on Estonia’s recent history. “In most countries, state budget deficits are decreasing, structural reforms are being implemented, [and the] ESM has been established.”

The comments paint a brighter portrait than the remarks which the former World Bank economist made a month ago, when he said that Europe was “muddling through” due to significant pockets of economic decline. On Saturday, he said that trust and stability are begun to be restored.

“When we look at how different government-bond yields have developed, I would say there is less fragmentation than a few months ago.” He said that the ECB has “done a lot” to facilitate stability “and now a clear responsibility lies on governments.”

Mr. Hansson took over as Estonia’s central-bank governor earlier this year and is credited with giving the small Baltic state a more vocal seat on the ECB’s governing council. He is widely considered to be a trusted ally of ECB President Mario Draghi, and has been an advocate for bold action being taken to arrest the crisis and decrease uncertainty.

Still, Mr. Hansson knows the crisis isn’t solved, and he continues to preach a slow and steady approach.

“It is not wise to move too fast when restructuring very political issues or creating new institutions. It takes time,” Mr. Hansson said. “When establishing new institutions, it is better to go slower, rather than cannonball ahead.”

The word of caution comes as European Union leaders discuss a variety of measures aimed at managing the three-year-old eurozone crisis, including the establishment of a new eurozone banking supervisor. Policy makers have taken different views on how quickly a supervisor should be installed.

From the editor: as the new president of the Estonian central bank, Ardo Hansson recently completed his first 100 days in office. According to a local newspaper report,  for a small eurozone country, his influence is already being felt in the corridors of the European Central Bank in Frankfurt. Before taking the position at the Estonian central bank, Mr. Hansson worked in the World Bank for more than 10 years. His most recent position was in its Beijing office, where he stayed for more than three years, working as the chief of its economic policy unit.