Estonia has one of the most effective public sectors in the world, according to the International Civil Service Effectiveness Index, compiled by the UK’s Blavatnik School of Government and the Institute for Government.

The index, compiled for the first time this year, is a new initiative to help countries determine how their central civil services are performing and learn from each other. The first index covers 31 countries, so it is certainly not definitive, but does give an indication of the governments’ effectiveness across every continent.

Estonia is ranked seventh in the new index, with the compilers noting that some indicator scores are especially noteworthy – for example, Estonia is ranked on top in digital services and “Estonia’s overall performance could reflect its strong IT policies and investment in IT infrastructure”.

On the other hand, the main indicator that requires attention is inclusiveness. “The metrics overall suggest lower than average women’s and other group representation in the civil service,” the report says.

Estonia on top, when adjusted to GDP per capita

The most effective public sectors in the world, according to the index, are in Canada, New Zealand and Australia. However, when the scores are adjusted to GDP per capita, Estonia emerges on top, followed by Mexico and New Zealand. 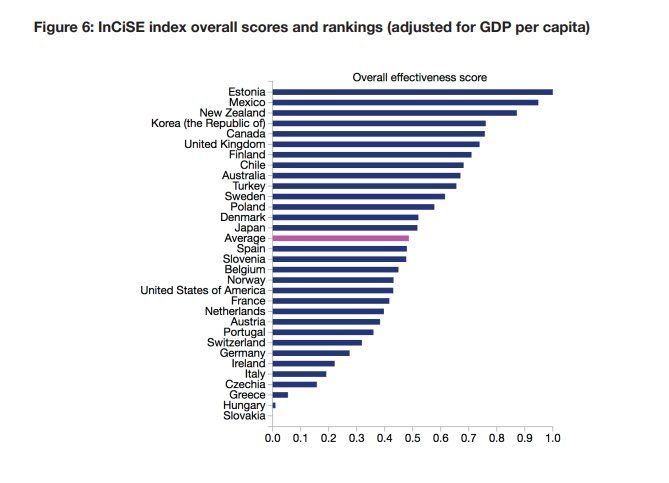 The International Civil Service Effectiveness Index was created to help determine whether civil services globally are performing effectively and in which areas, relative to their international counterparts. “This matters because civil services have an important role to play in helping their countries to prosper,” the report says.