While Estonia’s exports to America and Africa declined year on year in 2012, exports to Asia grew by as much as 20%, the statistical office said on Wednesday. Export of goods by Estonia overall climbed 4% in 2012.

“More than half of the goods exported from Estonia went to neighbouring countries Sweden, Finland, Russia and Latvia. The share of Asian countries was five percent,” Evelin Puura, head of foreign trade statistics at Statistics Estonia, said in the statistics blog.

Exports to most of the principal Asian destinations increased in 2012. The biggest rates of increase were recorded in exports to Kazakhstan, Afghanistan, South Korea, India and Singapore. 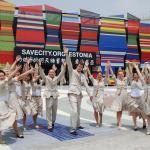 Estonia has recently also played a part in the development of Afghanistan. Exports to Afghanistan soared 58-fold mainly as a result of bigger shipments of mineral fuels, as well as dairy products. Exports to South Korea surged 2.4-fold over 2011 as the export of machinery and mechanical equipment, iron and steel products and wood and wood products moved up substantially. To India 1.6 times more goods were exported than in 2011 and the categories having the biggest effect were machinery and mechanical equipment, wood pulp, and iron and steel products, which also were the top articles exported. Exports to Singapore grew 1.4-fold as the export of mineral fuels, furniture, machinery and mechanical equipment moved higher. Mineral fuels accounted for the biggest volume in exports to Singapore.

Exports to Asia were 1.4 times smaller in 2012 than Estonia’s import from Asia. Mostly electrical and mechanical equipment was imported from Asia.

European countries accounted for 86% of Estonia’s total exports in 2012, Asian countries for 5%, Africa for 2%, and America for roughly 7%. Estonia’s exports also went to Australia and Oceania, and Antarctica.