The Heritage Foundation’s 2018 Index of Economic Freedom ranks Estonia’s economy as the seventh freest in the world.

According to the index, Estonia’s economic freedom score is 78.8, and even though the score decreased by 0.3 points compared with 2017, the country is still doing fairly well, having been ranked higher than the United Kingdom and the United States (eighth and 18th, respectively).

Estonia’s score declined because of lower scores for the government spending, property rights and labour freedom indicators outpacing an improvement in government integrity, Heritage said. However, “Estonia is ranked 3rd among 44 countries in the Europe region, and its overall score is above the regional and world averages”. The only countries in the European region ranking better than Estonia are Switzerland and Ireland.

“Successive governments have pursued a free-market, pro-business economic agenda and sound fiscal policies that have resulted in balanced budgets, low public debt and greater economic freedom,” the index points out.

A resilient and well-functioning economy

“The rule of law remains strongly buttressed and enforced by an independent and efficient judicial system. A simplified tax system with flat rates and low indirect taxation, openness to foreign investment, and a liberal trade regime support a resilient and well-functioning economy. Management of public finance has been notably prudent and sound.”

The index also says that Estonia’s transparent regulatory environment enhances business freedom. “Due to the relatively low level of unemployment, it is sometimes difficult for employers to find workers to hire. Improving public-sector worker efficiency is one of the government’s goals. The government increased some pension and agricultural subsidies in 2017 but generally avoids distortionary economic interventions.” 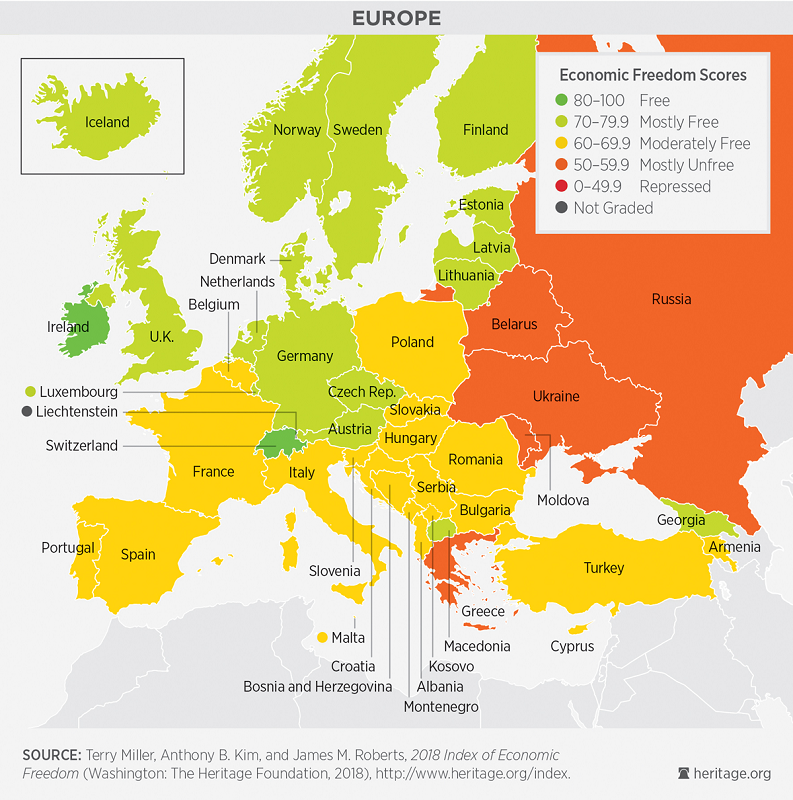 The index is comprised of 180 countries and territories in the world. Launched in 1995, it evaluates countries in four broad policy areas that affect economic freedom: rule of law; government size; regulatory efficiency; and open markets.

The Heritage Foundation is an American conservative public policy think tank based in Washington, DC.

The most economically free countries in the world:

The most economically free countries in Europe:

Cover: A couple ice-skating in Tallinn, the capital of Estonia (the image is illustrative/courtesy of  City of Tallinn).