Successful Estonian start-up Click & Grow recently ran a Kickstarter campaign for their Smart Herb Garden, raising $625,851 from 10,477 backers. I had the privilege to look after the marketing side for this project and I really mean ‘privilege’. Running a Kickstarter campaign is a marketer’s dream job: it’s highly measurable, the duration is finite and the playing field is more level than is usual.

1. Have a good story 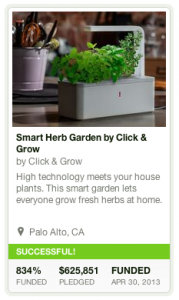 Having a good story is a good idea anyway but on Kickstarter it is crucial. A good Kickstarter story answers three questions:

– What is it and how does it make the world a better place? The first part is obvious, the second part isn’t: there aren’t very many Kickstarter success stories of things that promise more of the same or marginal improvements.

– Who are you to make this project happen? There are many examples of failed or severely delayed projects, so credibility matters. And because you don’t yet have a product, your own face is a big part of the story. Like marketing in the good old days!

– Why are you on Kickstarter? It helps to be clear how much do you need and how will you spend it.

2. Read articles and talk to people

Many smart people have done it before, so it would be a crime not to read up on Kickstarter’s own resources, blog posts of creators and Quora threads. Here are three posts ( 1, 2 and 3) I found really useful, there are many more. And you’ll pick up even more if your get on the phone/Skype and chat to a couple of people that have run a Kickstarter campaign.

3. Be part of the community

This is kind of obvious but backing a couple of projects yourself and lurking in the comments section of projects is a great start.

There are people more qualified to advise on video matters but I know this much: you need one part video shooting and editing skills and one part of aforementioned story to get a good result. If you hire external help for getting the video done, write a tight brief and take the time to thoroughly talk it through with the video maker before the work starts.

You also need to present your story well without the video. Good web copywriting principles apply — best pages are made easy to skim with sub-headers, illustrations and tables, as opposed to long paragraphs of text.

5. Make yourself visible on Kickstarter.com

Here’s where it gets a little less obvious. Most backers will likely discover your project on Kickstarter, not via your own mailing list or media. So you really want to be featured in places like “Popular”, “Staff picks” and the page that’s shown after you’ve backed a project. And the way to get there is earning your place by getting lots of people to back you in a relatively short amount of time. If you get listed well, you can expect every backer you convince yourself to drive 3,4 or more additional backers.

Our two main levers with the Smart Herb Garden were the existing Click & Grow community and PR. To engage the former, we had prepared three different mailing lists to go out the minute the project went live as well as personal email drafts to individual networks of team members. We also used paid promotion of our early Facebook announcements.

On the PR front we had identified a short list of six publications we really wanted to write about the project. We had pre-briefed them days before the project launch, in addition to a longer list of blogs and news sources that we contacted as the project went live. This secured coverage in Techcrunch, Gizmag, Mashable, CNET, which trickled down to other blogs in the following days.

Focusing the effort in the first 12 hours off the project got us our first backers, but perhaps even more importantly it got us listed throughout Kickstarter for the whole duration of the campaign. In the end more than 75% of pledges originated on Kickstarter.com.

…Do as the Romans do. And I don’t mean frequent visits to public baths or lavish festivities, but following the best practices that work really well on Kickstarter. Early bird offers and limited pledge levels give a reason for your loyal community members to back your project early (and help get listed on Kickstarter). Kickstarter-special reward modifications make backing more interesting for your biggest fans.

Kickstarted is not a store, so if you’re running a hardware project, there are also some restrictions compared to traditional pre-ordering. For example, you can’t offer multiple quantities of the same thing. What you can offer is ‘reasonable sets’ of different products, for example two console remotes. We introduced a set of two herb gardens, one with a green lid and the other white all around, which was reasonable enough for Kickstarter.

Last but not least, Kickstarter is a much more ‘live’ campaign than most marketing I’ve done previously. You’ll get a ton of questions and feedback in comments and personal messages, and you’re expected to not just listen, but take action too. We changed quite a few things as a result of feedback and this seems to be the norm on Kickstarter. The good news is that this feedback is much easier to act upon compared to most situations, as you haven’t yet started the production process.

Reading feedback, replying and making the necessary adjustments to FAQ’s or project description takes at least a couple of hours every day, which is a good reason to make sure there’s a dedicated Kickstarter ‘project manager’ in the team.

What I would do differently next time

Getting more than 10,000 people behind the Smart Herb Garden was definitely a good result, but the campaign was by no means perfect. Here’s what I’d do differently in the future:

– Show more face. There were no native English speakers in the team, therefore we made a decision early on to minimise talk time on camera. A good substitution would have been showing US backers and potential backers instead, and there was even a great opportunity to record this, but timing was too tight to organise shooting. Also, in hindsight I would also have organised a couple of meet-ups with existing community and new backers.

– When you get into stretch goal territory, be more ambitious. The success of the project had us set stretch goals twice which kind of worked, but in hindsight I’d set them once and for all.

It’s all about the team

While I had a say in marketing side of things, the brains behind the project belonged to Mattias Lepp, founder of Click & Grow. My tip #8 would be to borrow some of the founder’s entrepreneurial energy for any Kickstarter endeavours. Other members of the Click & Grow team, people at Velvet & London AD and Max Borges Agency all made huge contributions. A good reminder that it’s all about the team.

This article was first published by Andrus Purde on http://purde.net/

Andrus is a serial marketer and entrepreneur.

1 thought on “How to run a successful Kickstarter campaign: 7 tips”