A tiny Estonian outfit offers a way out of the credit crunch and, possibly, a way to rebuild banking 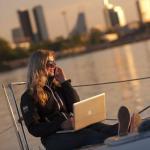 I have started making loans to total strangers – scores of them. I am not mad, rich or philanthropic. The loans are tiny. The safeguards are good. So far, the borrowers are paying me back and I am turning a handy profit. Even nicer, I feel I am part of a revolution which could save Western capitalism. It is all happening in Estonia.

Banking is the economy’s biggest weakness. It offers stingy, fee-ridden savings products and over-priced loans with nasty hidden costs. Intermediaries gain colossal profits, especially when they are greedy and reckless. When things go wrong, as they inevitably do, the taxpayer picks up the bill. Apart from that, it works fine.

So alternatives are welcome, such as ‘peer-to-peer’ lenders, which put the cash-thirsty and the cash-rich in touch with each directly (they make their money by charging a fee for the service). Zopa, a British peer-to-peer outfit, has lent £260 million (€310m) since it started in 2005.

Isepankur (it means ‘Self-banker’ and sounds like ‘Easy-banker’) offers a better deal, because it is lending in countries where the banking system is less developed. Estonians (even with a good credit rating) typically pay 50% for an unsecured ‘doorstep’ loan. Isepankur gives me and other outsiders a chance to lend to them at much lower rates – 28% is typical.

That is a good deal: the best savings rate I can get in a British bank is under 3% (and half the meagre proceeds go in tax).

Isepankur opened for non-Estonian investors late last year. I sent off a few hundred euros to get going – and immediately got a phone-call from the chief executive. That was an impressive bit of customer service. (I have since helped tidy up the English on the website.)

The potential borrowers have to convince lenders of their creditworthiness. ‘Tanelvakker’, for example, is a telephone engineer wanting to renovate his flat. He wanted to borrow €2,600 for 36 months at 12%. He is a single man, with a salary of €2,500 a month. The capital and interest payment would be €86. I took a look at his other outgoings (mortgage, car-lease payment and a credit card) and reckoned he could afford that easily. So I lent him €10. Dozens of others did the same. He makes one payment a month to Isepankur – which splits the money among us. If loans go bad, Isepankur sells them to a debt-collection agency.

Competition drives loan costs down. Good risks pay less. ‘Akiraam’ (a secretary on €600 a month) wanted €200 to pay for a Finnish-language course. She was ready to pay 28% but ended up paying only 12% because lenders piled in. Dodgy borrowers struggle, or pay more: lenders can grill them online. If they provide inadequate answers (or none), then their credibility suffers.

Some borrowers do default: an average of 3%, Isepankur reckons. But the interest rates that the successful ones pay more than make up for that. So far three of my loans are a bit late – but the money from the good ones more than outweighs that.

Isepankur’s costs are low: mainly running its website and advertising. It is still tiny. Perhaps it is too new, and too different. But I remember when they said that about another Estonian invention: Skype.

1 thought on “Reinventing banking and revising capitalism in Estonia”