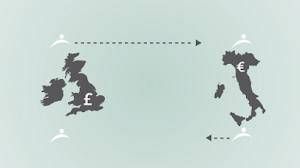 The company said it is currently transferring over one million pounds a day for consumers and small businesses, which it puts down to the recent £3.9 million investment from Peter Thiel, the co-founder of PayPal. According to the company, the investment “has helped the company double in size in just four months with the volume transferred … growing from £125 million to more than £250 million”.

TransferWise announced that it has increased the number of its currency routes nearly fourfold. The most recent currencies added to its money transfer platform were the Indian rupee, the Australian dollar and the Turkish lira.

In addition to launching a new iOS app, the company is also introducing the ability to send money via email and a “receive money” feature to “create new ways for people to send and receive money cheaply and easily invoice over the internet”.