Estonia is the most entrepreneurial country in Europe – and Northern Europe and the Baltics are a hotbed of entrepreneurial activity, according to the World Economic Forum.

From that comparison, Estonia emerges out on top, while two of Europe’s largest economies, Germany and France, don’t even make the top 10, the WEF said. According to the forum, Estonia has a high rate of total early-stage entrepreneurial activity and an above average rate of entrepreneurial employee activity. “Almost 80% of businesses started in Estonia are opportunity-driven and Estonia is often cited as a model for entrepreneurially-oriented policy,” the report points out.

Entrepreneurial success is no accident

“Estonia’s entrepreneurial success is no accident,” the report also says. “In the early 1990s, the Estonian government purposefully initiated a set of reforms that turned an existing system of state-owned companies, guaranteed product-markets and fixed prices upside down. Estonia’s government has continued to innovate, most visibly with the digitalisation of government services, an area where Estonia has a global lead. Estonia now offers e-residency to anyone in the world who would like to do business online from a virtual base.”

Sweden comes second in the WEF ranking, Latvia third and Lithuania seventh. Of the biggest economies in Europe, only the United Kingdom is in top 10 – on the fifth place. 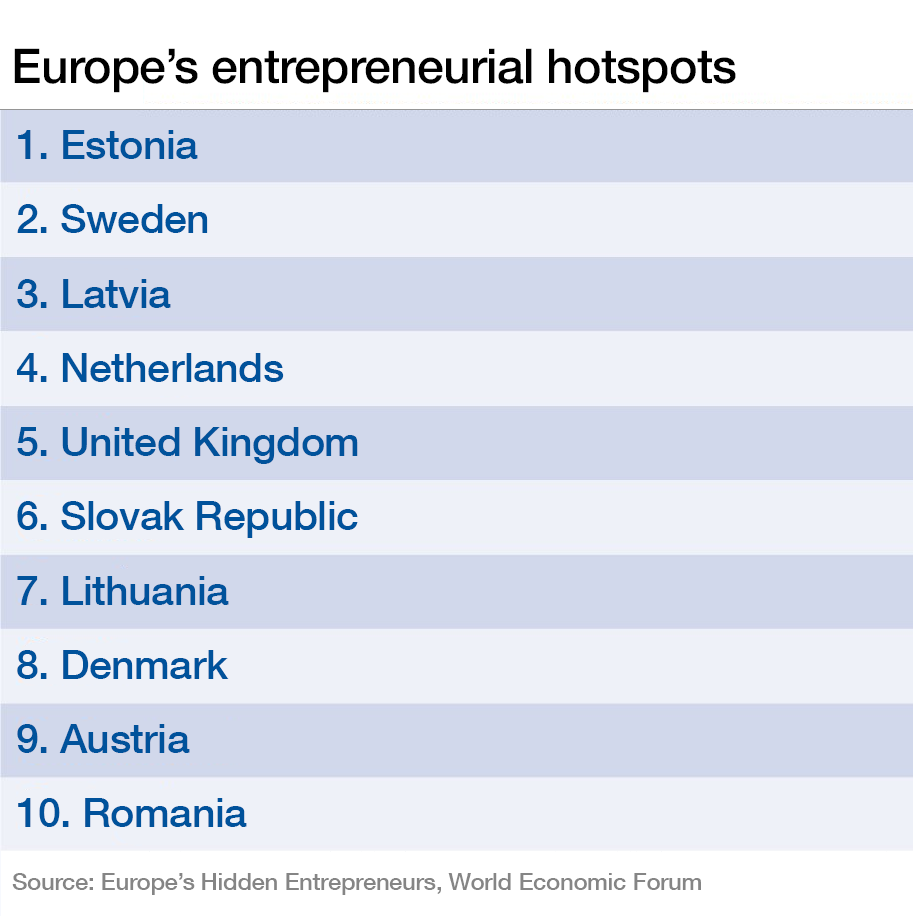 Italy is at the bottom of the ranking, with virtually no entrepreneurial employee activity to report at all, alongside Greece and Spain.

The WEF used two unique data sets that were combined for the study: the World Economic Forum’s Global Competitiveness Index data, which ranks economies on their economic competitiveness, and Global Entrepreneurship Monitor’s assessment of entrepreneurial activity.

Cover image by Eiko Ojala (the image is illustrative.) Please consider making a donation for the continuous improvement of our publication.

1 thought on “WEF: Estonia is Europe’s most entrepreneurial country”