Estonian animated cartoon “Lotte and the Moonstone Secret”, directed by Heiki Ernits and Janno Poldma, has won two prizes at a children’s and youth film festival Kinojazda that took place in Poland at the end of September. 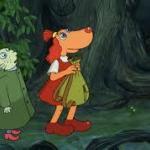 The film that is also very popular in Estonia won the audience’s prize in the Best Film category and the prize of the children’s panel. The interesting story, colorful characters and unexpected turns were the animated cartoon’s characteristics that were valued, according to the studio Eesti Joonisfilm.

The full-length animated cartoon was released in 2011 in the studio Eesti Joonisfilm and The film has received 11 prizes from international film festivals so far. On 27 October, “Lotte and the Moonstone Secret” will be screened in Washington, US, as part of Kids Euro Festival 2013.