Our latest “Artist of the week” is a legend of Estonian art and literature scene, writer and painter Toomas Vint. Undoubtedly Mr Vint deserves a more special and elevated spot than “artist of the week” but in this case it’s a nod to the fact that his book An Unending Landscape was recently published in English by Anglo-American publishing house Dalkey Archive Press.

Toomas Vint has been described as a painter who writes, or a writer who paints – rather unusual feat. Vint was born in Tallinn, the son of a scientist. He studied biology and geography at Tartu University. He published his first prose in 1968 and became a member of the Estonian Artists’ Association in 1973 – and is a successful painter of what could be described as “neo-navist” metaphysical landscapes. His works have been exhibited in art galleries all over the world – in Tokyo, Helsinki, Montreal, Essen, Moscow, Budapest, Paris, New York, Gdansk, Berlin. 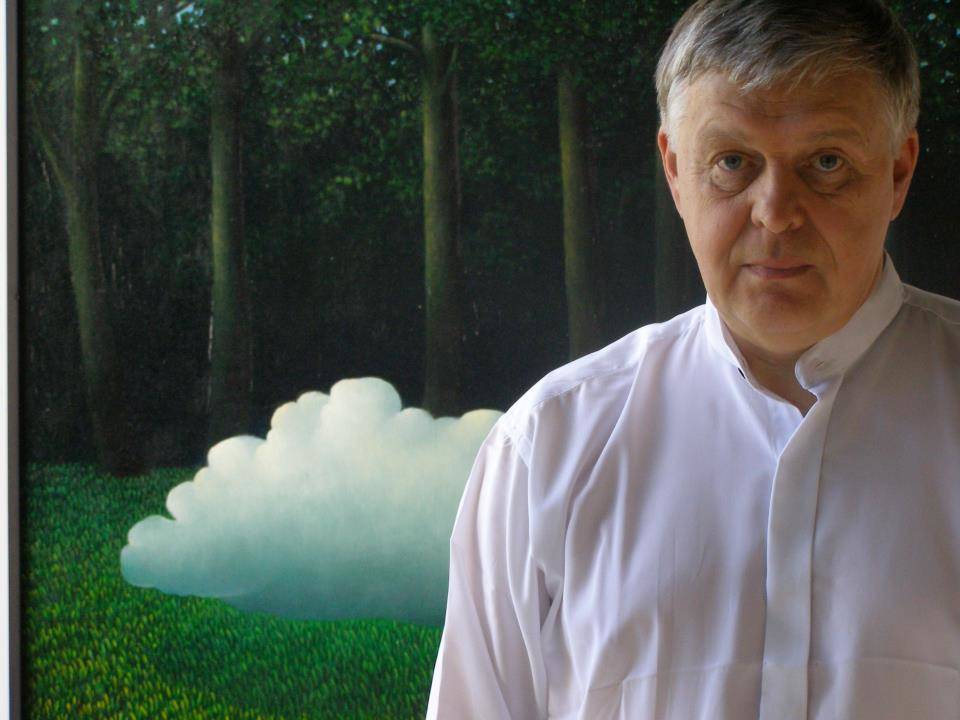 Vint as the author has not yet been discovered widely abroad. Paintings are more readily accessible than things that have to be translated – which is why the publishing of An Unending Landscape is a rather special occasion.

His books have been described by his peers as such: the protagonists of his works are mostly people with conflicting moods, rather rootless contemporary people. The idea of being a loner is accentuated, as is unsureness and longing. In the forefront of his works are the psychology, present state and ethical bearing and inability to form a sense of responsibility of his characters. Another aspect is the opening up of characters to new impulses. His characters often act in an irrational way, are rarely happy, and “live past one another”. It is the inner life of characters that counts. The story often evolves in the direction of the grotesque. Vint likes the concepts of “game” and “playing roles”, especially in his short-stories. In his more recent novels and stories there is an examination of the opposition of art to life. Vint takes quite an interest in sexual matters and roles, and his books contain sex scenes, usually of a complex kind, and can involve prostitutes, peeping toms, and so on. Stylistically, Vint is definitely postmodernist in his recent literature, playing as he does with levels of narration and novels within novels. 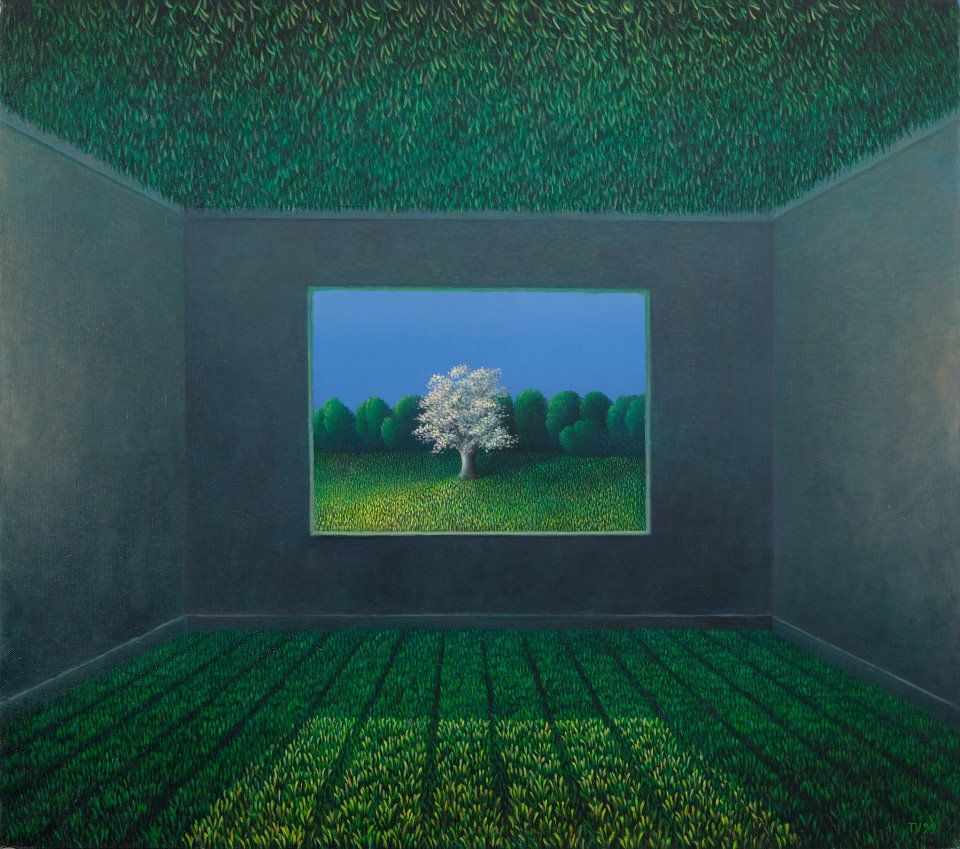 An Unending Landscape is a subtle, humorous, mind-bending novel about the origins and fates of three different manuscripts. The first is an autobiographical sketch concerning an Estonian writer’s old schoolmate, now a government official, who is trying to recruit our narrator to spy on his fellow citizens. The second, composed by the hero of the first, is a fictionalized (and far more exciting) version of these same experiences. Finally, the self-aggrandizing hero of this second story decides to write his own novel, which seems on one hand to be a plagiarism of Chekhov’s “Lady With the Lapdog,” and on the other to be retelling the same story we’ve already heard twice over—until it’s no longer entirely clear whether these stories relate to one another like Russian dolls, or are three parallel versions of the same events, each no less valid than the others.

I caught up with Mr Vint for a quick chat to talk about his book and work.

It doesn’t happen very often that Estonian books are published internationally. How and when was the idea to translate your book into English conceived?

US publisher  Dalkey Archive Press has shown lively interest for Estonian literature and culture for a while now. For example, they have published four novels by Mati Unt and recently presented “Arvo Pärt in Conversation” in London – an interview and essay collection about the world famous Estonian composer. John O’Brien, who runs Dalkey Archive Press, was interested to publish An Unending Landscape, and so it happened. I am always happy to see my work being translated. To me it means that the literature of our small Estonian language is getting more exposure. Gaining a broader audience is the natural purpose of writing literature.

An Unending Landscape was originally published in Estonia quite a few years ago, in the late 1990’s. Do you think that it would still be relevant for an international reader now? 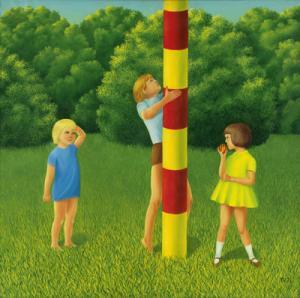 Although An Unending Landscape describes Estonian life in the mid 1990’s, it deals with problems and issues which are still important and relevant today – and some of them are universal. Human beings change slowly and the processes started in the 1990’s sometimes show their unpredicted and awkward side today and beyond. I think that national traditions no longer have a significant role in the contemporary literature. I can see the formation of a new cultural space, embracing the best of all cultures. It is the individuality of the author that is gaining more importance—the uniqueness of his inner world that he reflects in his work.

Do you feel that the meaning of your thoughts and ideas have been preserved in the translation?

The main task in being an Estonian writer is to preserve our small language. A writer is a mother who must raise and nurture her child. If a writer can use his language to give a better understanding of human life to his readers, then his work has served its purpose. Exact translation is an impossible thing, as each language leads a life of its own. However, a good translation can capture the intellectual essence of the story. If I can recognize myself in the text while reading the translation, then it has succeeded. An Unending Landscape was translated by a very good translator Eric Dickens, whom I trust 100% – knowing that he has explored and researched the framework behind the novel so well, as if it was his own book.

You are sometimes called a writer who paints – or an artist who writes. How would you categorise it yourself and how easy or difficult it is to be one or another?

As a writer, there’s always an anxious anticipation before a novel is published – you never know what the public acceptance will be and how successfully it will be sold. Ironically, when I prepare for an exhibition, I see myself as an artist who writes – and when I’m writing a novel, vice versa. Sometimes it creates a confusion – among the public, as well as in my own creative soul.

Lately I have been more of a writer who paints. I worked very intensively on my new novel called “Openly About the Marriage” for about a year and currently feeling a bit saturated from writing. Hence, I’m planning to work on my paintings again, as there are two exhibitions planned for 2014 – “Nude in Landscape” and “Meaningful Landscape”.

An Unending Landscape by Toomas Vint is now on sale via Amazon.

1 thought on “Artist of the week: Toomas Vint”