Maria Minerva aka Maria Juur is an Estonian underground musician, based in London, and currently touring the US. She is releasing music on the prominent and prolific Los Angeles independent label Not Not Fun and its dance-oriented sub-label 100% Silk. She is known for her eclectic and dreamy music style and lo-fi videos. She has cited Brian Eno, Throbbing Gristle, Cabaret Voltaire and Moodymann as her influences. 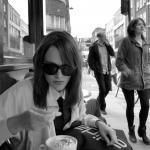 Before moving to London, Maria was studying at the Estonian Academy of Arts in Tallinn, where she earned a BA in Art History. In 2010, Maria moved to London to do her Masters in Aural and Visual Cultures at Goldsmiths, University of London. Maria has also conducted an internship at the The Wire Magazine and published art and music criticism in Estonia. Maria’s releases have received favorable reviews from websites such as Pitchfork Media and The Quietus. One of Maria Minerva’s supporters has been the influential music critic Simon Reynolds. Maria’s track “A Little Lonely” made it to The Guardian’s top 40 singles of 2011. She was also hailed as one of the underground starlets to watch by the French Vogue. With a kind permission from music review site Bowlegs – www.bowlegsmusic.com we are republishing their recent interview with Maria.

Bowlegs was chuffed to touch base with a very ‘siked’ and constantly on the move Maria Minerva in the midst of her first US tour. We talked California scheming, white magic, h pop and voodoo breathmints. She was sweet when we got her lyrics a bit wrong and gave us some tantalising insights into her dreamlike, fuzzy pop logic.

Yeah, the line “I don’t want my voice to be heard” is and isn’t a joke. When you’re a singer/songwriter (which I sorta am) then this is namely what you should want. This track was written after I had been in the music biz for a year or so, actively touring, and doing press and meeting people etc, had survived my first bad reviews and rumours, heartbreaks etc. At that time I was living in exile in Portugal so felt good writing these lines and being sorta cut off from the rest of the world. Not trying to be mysterious here or anything, but being in Lisbon made it possible to take a step back from all the London life/big cities/touring madness. Also I became kinda critical of my own success, everything just seemed like a bunch of bullshit at that point. So I wrote this song sorta to say to myself and others something like  ”I do love music a lot and being blogged about whatever, but its not all I care about, quite the opposite”. So yeah, a coming of age record for sure, ‘cos when you first put out music you get so siked, and then the comedown.

Repetition also seems to be a key technique; the way you use vocal lines like samples or other pieces of audio in the overall collage. Can you tell us a little about the song building process and how your songs get started?

Yeah, repetition is a form of change says Brian Eno! I love minimalism, also motorik, krautrock and all that. Estrangement thru looping. Timewarping and spinning around one’s own meridian, or whatever. I don’t know how the songs come about. Such an abstract process, songs come outta nowhere I suppose, and the musician has to finish them.

As with other artists on your label there seems to be a kind of ‘magic realism’ to the soundscapes conjured to express your ideas. The line that springs to mind from the new album is ‘my magic future history’. Can you give us a flavour of the key sounds in the Maria Minerva soundscape and any productions that influence your approach to sound?

I have this theory that all the tracks that end with a gradual fadeout still go on somewhere in the world but we can’t hear ‘em….I am influenced by traces of tracks, little elements. I live for bass but I don’t really have that much bass in my own music. “My magic future history” sounds sweet but actually I sing “white magic, future history”. Yeah white magic is important, gotta approach everything with a warm open heart. Though I really like D’angelo’s voodoo, dark (sex) magick too. Once I sent my friend some breath mints in an envelope, he thought it’s a voodoo present from faraway relatives…

Location seems to be a strong theme in your work. Do you find that currently being located in London with its vibrant underground scenes influences your approach and outlook and how much does location in general inform the music making itself?

I am not currently in London! Currently I am in the car on the way from Columbus, Ohio to Chicago, aka I am on my first US tour. USA is blowing my mind. Next ep and lp I am gonna put out will be recorded in New York. After this tour is over, will stay there to work on music and play more shows. Yeah I am all about changing location. Changing location actually makes it hard to focus on making music, it’s like kinda impossible to work if you don’t have a place to live, but it’s a good way to clear your head from all kindsa bullshit. I left London August 20th and flew to Australia and New Zealand, then from Melbourne to New York, all this in two weeks time, now I am travelling in the US for over a month. Next week I’ll make it to California….I have a song called “California Scheming” about wanting to go to Cali. Now it seems I schemed my way there, took almost two years! I feel like the luckiest girl when I think about it, ‘cos back in the day in Estonia I was like I will never be able to afford to travel and when I can afford it, I wont probably have the time and the freedom. So yeah, it all worked out. Thank u for the music!

You’ve called yourself a ‘sample alchemist’ in the past – could you give us insight into how this process feeds into your work and the kinds of sources you look to for inspiration?

I don’t like the idea of inspiration, this term comes with too much baggage! It’s more about being, like, attentive, paying attention to (sonic) details. It comes down to the joy of stealing and paying homage to the stuff you love!

The reference points on the new album seem quite 80’s based and there is a strong sense that you are playing with the language and ‘catchiness‘ of pop itself. To what extent does this kind of deconstruction inform your overall approach?

1980s? Can u give me an example? Yeah, but the catchiness of the so called “ideal” pop has always been the premise of my music-making. Got nothing going on with the 80s specifically. First and foremost I wanted to make an album that is not so easy to pin down. People can say whatever about it but I think it’s kinda hermetic and doesn’t follow any specific trends. When people talk about h pop then I’m like fine, I don’t mind, but me, Hype Williams and James Ferraro all sound completely different so what exactly is h pop? Would be so much nicer if we got called young musical visionaries of our generation or whatever, who don’t always run along with the latest pitchfork trends, even if the work is sometimes incoherent and of varying quality.

The videos you have put out to date are always very individual and striking. How do you approach the process and can we expect any new visuals to accompany the new album?

I approach the process with an open heart and an open mind and with no budget. Yeah there are videos coming out for 3 other tracks from my new record. I’m siked!