EstDocs is an annual not-for-profit Estonian documentary film festival and competition held in Toronto, Canada, that presents stories from Estonia. Its mission is to provide a 360-degree perspective on Estonian history, politics, arts, culture, sport and other subjects. 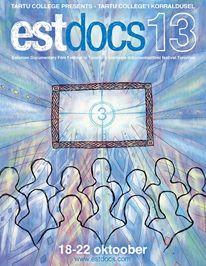 Established in 2004 and so far visited by over 12,000 film lovers, EstDocs has raised the profile of up-and-coming filmmakers and had the pleasure of featuring the country’s top internationally recognised filmmaking talent. All public screenings are either in English or have English subtitles.

Canada has traditionally been home to one of the largest Estonian populations outside Estonia. However, EstDocs audiences are not limited to people of Estonian heritage. The festival’s aim is for the screened documentaries to appeal to film lovers of all backgrounds and ages.

Certain screenings are preceded by a reception and followed by a provocative Q&A session with the filmmakers. And forget popcorn – complimentary “kringel,” traditional Estonian sweetbread cake, is available for audiences to savour throughout the festival.

Now in its 9th year, the 2013 EstDocs catalogue includes a wide variety of captivating titles. Subjects touch on the following narratives:

“EstDocs plays a significant role in Canada. The films expose audiences to meaningful, often never-before told stories from the small nation of Estonia. These specially selected titles may present very unique tales, but at their core, they will resonate universally with viewers of all backgrounds,” the festival director Kristi Doughty said.

New to this year, adults are invited to attend an afternoon of Estonian Animation on Saturday, 19 October. Estonia has for many years been punching above its weight when it comes to animation and has a good international reputation for this art form, one that dates back to the 1930s. The hour-long program will present critically acclaimed Estonian animation to challenge viewers.

This year’s gala film will be “To Breathe as One” (Üheshingamine). It is considered the unofficial sequel to “Singing Revolution,” which won the top prize at EstDocs 2007 and gained tremendous subsequent international attention. It’s directed by Maureen Castle Tusty, Bestor Cram and Mike Majoros and produced in the US and Estonia. The film presents Estonia’s most important cultural event, the song festival, which in many ways defines the Estonian narrative. In 2009, the Piedmont Youth Choir from California was selected to participate in the song festival. This choir went to the event knowing that they would be performing at a big concert stage, but left with the knowledge that the historical and emotional impact of the song festival was something greater than what they had expected.

Just like last year, the festival’s honorary patron is Estonian President Toomas Hendrik Ilves. “I am pleased to continue as the honorary patron of EstDocs. Each year, I look forward to what the film festival has in store for audiences and fans. Now in its 9th year, I have witnessed the continued evolution and growth of the film festival in Toronto. As the world increasingly moves online, it is thrilling to witness the amplified exposure and popularity of the EstDocs short film entries on YouTube. The films crafted by both professional and amateur filmmakers present a unique interpretation of the filmmakers’ relationship to Estonia. EstDocs’ outstanding documentary selections vividly showcase Estonian culture and filmmaking talent to viewers outside the country. The festival is an exceptional opportunity to provide a lens into our nation’s narratives and tell our stories to a wider international audience,” the president said in a statement.

Trailer: To Breathe as One