Estonian contemporary artist Mirjam Siim’s solo exhibition, River of Life, opens in London on 18 July. It is her debut exhibition in Britain and follows her receiving first place in the Ashurst Prize for emerging artists. In her series of paintings and drawings, Siim alludes to the topographic river as a metaphor for both the physical and emotional life cycle. Challenging the Faustian notion of a linear existence, Siim’s art suggests life instead is perpetually circulating both in periods of violent flux and serene placidity.

Against this thematic backdrop, Siim has fashioned works that explore humanity’s symbiotic relationship with nature and with fellow individuals throughout moments of our love, laughter, triumph and struggle. She also portrays humanity’s propensity to toxify these relationships and exploit the vulnerabilities of our shared experiences.

River of Life has its genesis in Siim’s desire to create a series of works inspired by Island, the final novel of Aldous Huxley. In the book, Huxley explores the possibilities of an individualistic yet collectively intertwined utopia as a distinctive contrast from his earlier dystopian novel Brave New World. It is this spirit of enlightened optimism Huxley pursues in Island that is reflected in Siim’s art.

Like Huxley, who traded the terraces of Bloomsbury for the mysterious Hollywood Hills, the Estonian-born Siim has gone from the northeastern corner of Europe to its inverse geographical extreme, the sun-kissed sands of western Portugal. Siim’s travels have informed and inspired her work leading her to understand “home” as a relative concept, one which like her river of life is in perpetual flow, often ending in the place from whence it derived.

Art has been a central part of Siim’s life since childhood. Estonian World interviewed the artist ahead of her London exhibition.

Can you recall your first artistic experience?

The one that first comes to mind happened when I was six years old and had to do a drawing test to get into the local primary school, which was art-oriented. We had to draw a still-life of a toy car and a few more things that were placed on a chair, covered with linen. The teacher kept telling me I was drawing the whole thing too small, so I started over at least five times. In the end I was very disappointed in myself, but I managed to get in and thanks to that, eventually fixed my sense of composition also.

Who were some of your early artistic influences?

Probably my sister, who is five years older than me and was always very creative. Since we were small, she was very talented when it came to building doll houses or making cards for different occasions. Later on we both adapted to more serious occupations in the creative world. 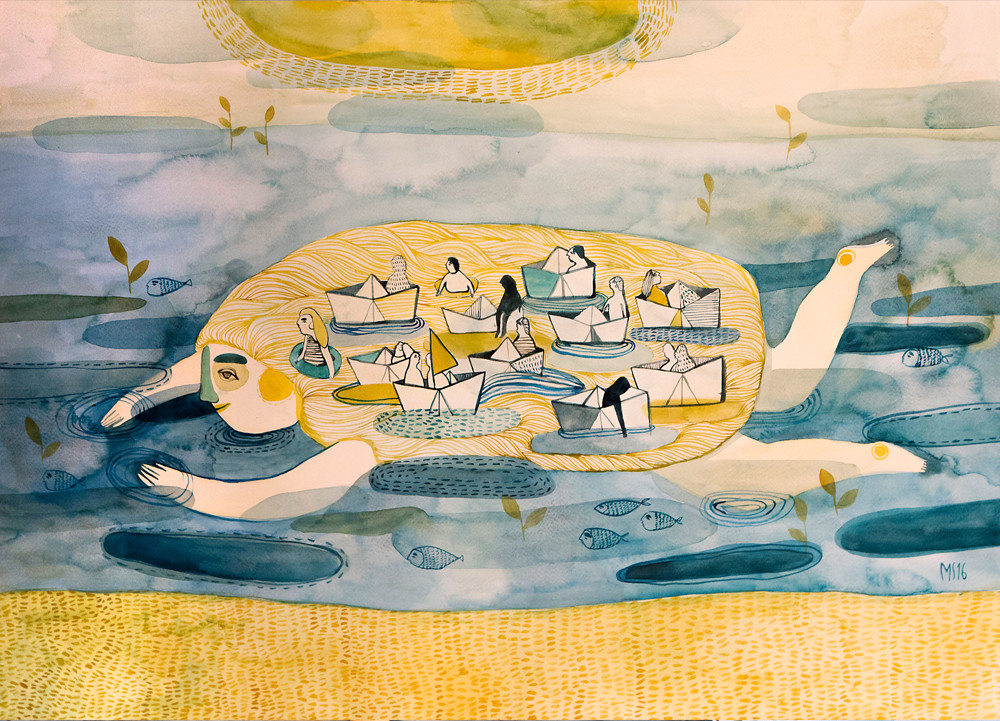 Another artist, who has inspired me since I was around 15, is Gustav Klimt, whose work my art teacher at the time recommended to see, to look for inspiration for my middle-school’s graduation work.

What elements of Estonian culture have impacted and influenced your style and subject matter?

I think there has been more influence from Estonian culture hidden away in my work than I realise, as it is a natural part of me and my mentality. But what I can bring out consciously is probably the love and communion with nature, as it has been in Estonia throughout history. Also present in my work is the tranquillity and rationality that I believe is common among Estonians. Although I have to admit that during the period I lived in Estonia, my works were rather gloomy compared to my current works and topics, probably due to the long winters with minimum daylight and their effect on my mood.

Were your artistic talents encouraged in your childhood? 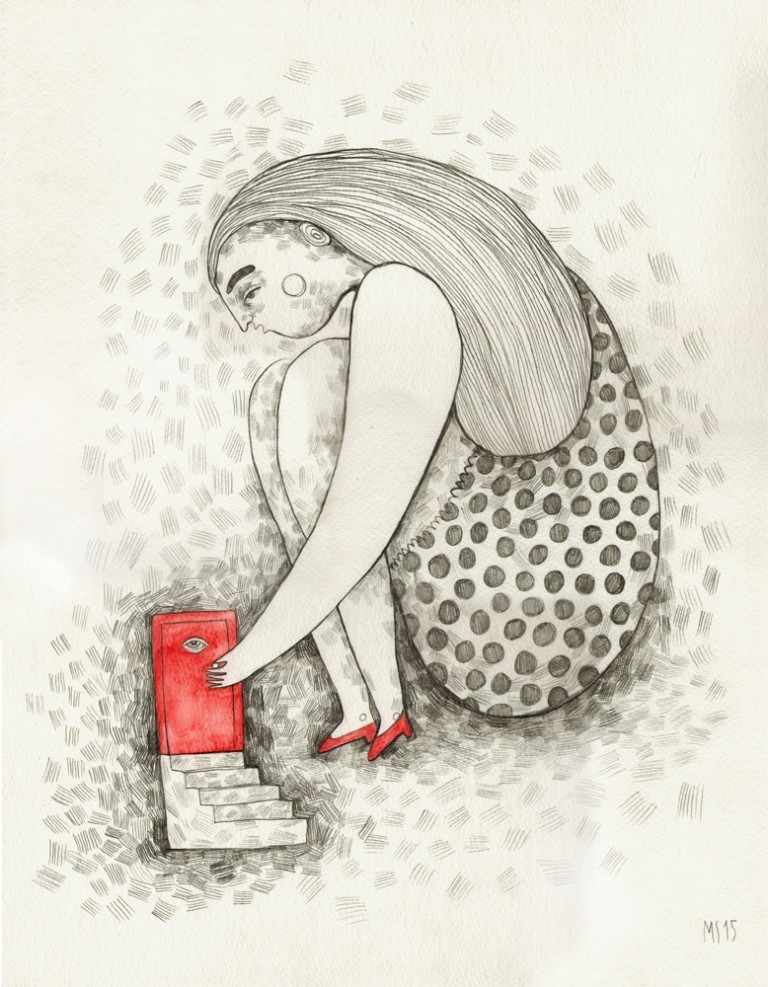 Had to check that with my mother – in her words I drew a lot in the kindergarten and now and again my works were displayed in the corridor and she always felt very proud. At home I was busy playing other games and running around with the kids in the neighbourhood, but I do remember always preparing cards or small drawings for my friends and family for any kind of occasion.

I think I got motivated to continue with art more seriously when I was around 12-13, after winning a few art competitions and hearing the encouraging words from my first art teacher, I quit my sports-training and went to an evening art-school instead.

What led you to make Porto your home?

I fell in love with Porto after my first short visit here. I was determined to come back through the Erasmus programme during my third year of university. After staying here for one semester I decided to stay another and during that time I had already made a good friend, who later on became my boyfriend and with whom we adopted two cats. And now I am stuck here. But honestly, Porto is a wonderful place to live in and I have never felt as comfortable anywhere else. Also, compared with many other places I have lived, the personality of the people here is surprisingly similar to Estonians. So basically I have found my own kind, but on the other side of Europe, with more sun and cheaper wine!

How does the landscape and culture of Portugal impact your work via-a-vis that of Estonia?

The Portuguese people and culture have had a massive impact on my work since I arrived here. Even though I consider the personality of Portuguese and Estonian people similar in a lot of ways, there are so many differences in terms of culture, habits, interaction between people etc. I have been observing it since I arrived here and new subjects for painting just keep popping out! 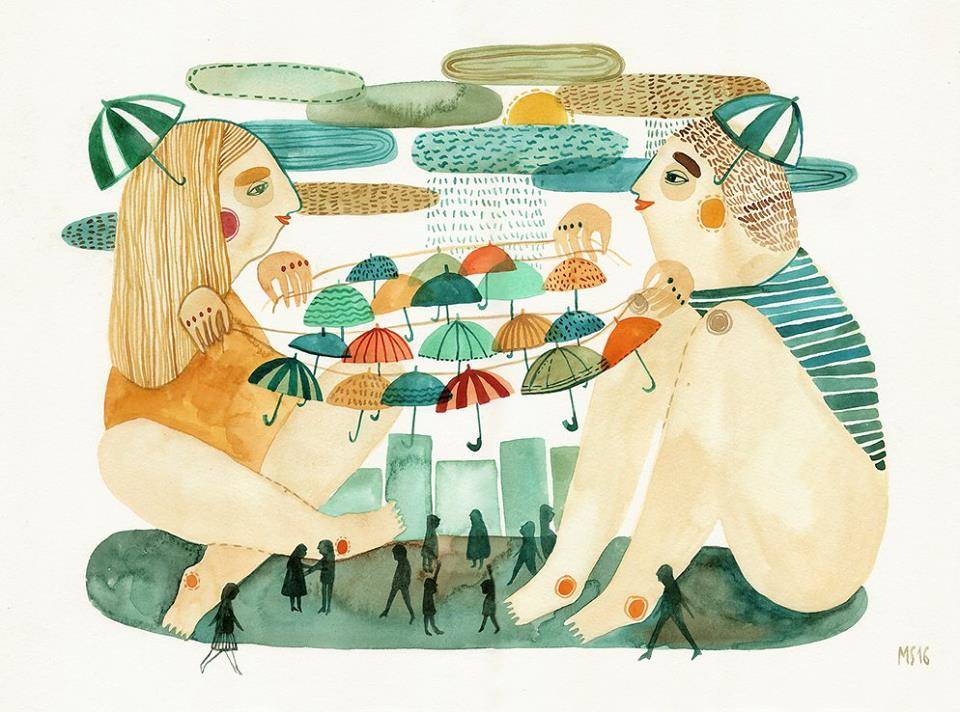 To me it seems the Portuguese are quite simple (in a very good way!) and value the right things in life and truly enjoy living (even though they also enjoy complaining… but then again, who doesn’t?), and all of that has brought me to re-think many things I considered right before and has added perspectives that I never thought of before.

When did you first read Huxley’s Island and what was your initial reaction? 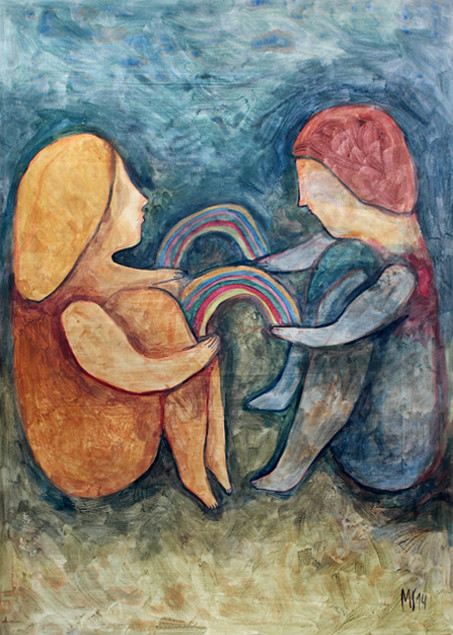 Coincidentally I read it while I was living on a small island myself – the Isle of White to be precise. Although the island I was living on was nothing like the one Huxley described in his book and maybe because of the contrast of two worlds, it left me with even deeper impression.

The book wasn’t an easy read, but since the beginning it fascinated me a lot and I was determined to do a series of illustrations about it. I only got to it years later, after finishing my university and with more time on my hands to read it again, analyse it and draw the images that appeared in my mind during the process. I think it is a book that everyone should read once in a life to understand how the world should really function.

What are your impressions of London’s contemporary art scene?

My contact with London’s art scene has been quite brief – during the times I lived there for short periods I was mainly working and only had time to visit the bigger galleries like Tate Modern, National Portrait Gallery etc. I am aware that there is a lot more than that in London and from my short experience in the other galleries I visited during my stay there I wouldn’t say that it is too different than the art scene in Tallinn or Porto – there is something for every taste and it is always changing.

Now more motivated than ever, I will keep concentrating on my art and the objective is to get better with doing it and also managing it. 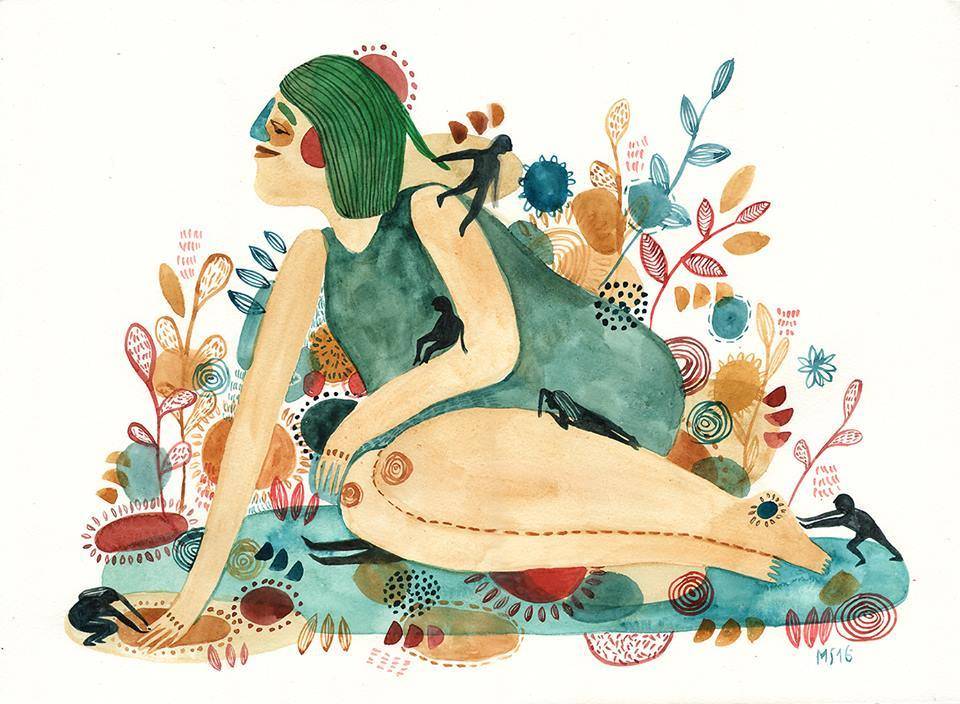 I would like to continue participating in different projects, involving street art, product design, graphic design, collaborations with other artists and anything else that I can use my creativeness for. Ideally in a way that I can also make a (more stable) living with it at the same time.

Mirjam Siim’s River of Life opens at the gallery space of Ashurst, LLC in the City of London. Visit the website to make an appointment.