Last week, Paavo Järvi conducted at London’s Royal Festival Hall. Järvi brought London a wonderful night of music, which included works by a living composer, a composer of the high classical period, and a high romanticist – and yet the entire evening was a seamless musical statement delivered by one of Estonia’s finest musicians.

Originally the great Christoph von Dohnányi was to conduct an evening of music from Mozart and Dvořák, but at the last minute the Philharmonia of London asked Paavo Järvi to substitute. It was a decision no one in the audience seemed to regret.

Järvi chose to begin the programme with a previously unscheduled piece, the Fratres of Arvo Pärt. Järvi demonstrated his supreme command of dynamic control in the piece for full string orchestra and percussion. Pärt’s Fratres begins with a gentle pianissimo in the strings and slowly swells to the heights of modern romance in a style, which is a signature of the world’s most listened living composer. Pärt’s music represents a synthesis of pre-baroque-, romantic- and contemporary music, and Järvi emphasised this balance in a manner that remained true to Pärt’s unique compositional style. The primordial percussion was balanced by a warm string sound, infused with heavy vibrato, which swelled from a quite murmur to the heights of Pärt’s introspective, yet paradoxically involving spiritual modernity. The piece ends as quietly, as it begins – and as Järvi brought it to a close, the audience at the Royal Festival Hall were as quiet and as pensive, as is possible. It was a deeply moving performance from a maestro who has personally known and worked alongside the composer for many years. 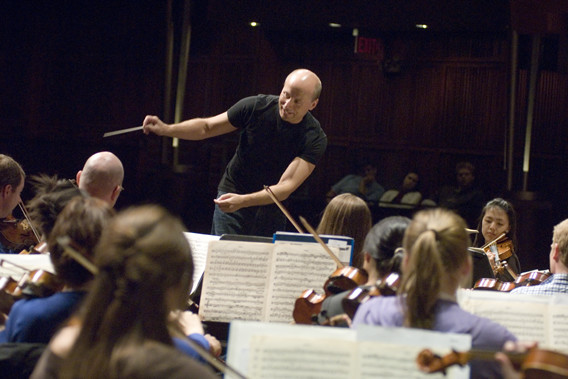 The next part saw a departure from Pärt’s unique modernism to a piece from the high classical period. Pianist Paul Lewis joined Järvi in a spirited, yet deeply refined rendition of Mozart’s 23rd Piano Concerto. Järvi precisely guided the orchestra through the piece, which allowed both soloist and ensemble to shine in their respective moments. Järvi and Lewis both took two additional ovations at the conclusion of the performance.

The featured part of the evening was Dvořák’s 9th symphony. Here the audience began to fully understand why Paavo Järvi is a supreme asset to contemporary orchestral performance. Sadly many contemporary conductors of the classical and romantic repertoire feel a need to limit tempos to the confines of a metronome. The age of the maestro who infused performance with a deeply personal tempo rubato, regrettably seems more and more a thing of the past. Yet on the night, Järvi demonstrated that a highly lyrical and simultaneously narrative style of conducting can unleash the true beauty of a much listened to, but still deeply energetic and emotive musical pick. In the tradition of the truly great conductors of the recent past, Järvi crafted a performance deeply infused with rubato, which helped to bring Dvořák’s final symphony to life. It was a profoundly human performance – one which emphasised both the bucolic serenity of the piece, as well as the soulfully charged passion of the greatest Bohemian composer.

Whereas his father (Neeme Järvi – Editor) tends to emphasise forgotten composers of the romantic era, and his younger brother (Kristjan Järvi – Editor) excels at more modern music, Paavo is frequently most comfortable with the late classical and high romantic canon. Tonight he demonstrated that a style of performance which emphasises emotion over dull precision, and humanity over academic interpretations, can warm the hearts of audiences more sincerely than any other style of conducting.

Järvi was given multiple ovations for an evening of music which covered vastly different styles of music, but one which was united by his supreme commitment to both dynamic perfection and spontaneity of tempi. The Philharmonic responded to Järvi’s direction better than they have done to many less involved conductors. A performance that from a technical sense was an accident, turned out to be one which will be remembered for its artistic cohesion and unbridled beauty. On the whole, it was a wonderful night of music which saw one of Estonia’s finest musicians conduct works by Estonia’s most prized composer, as well as works by two of the world’s most cherished composers. If only he took the same approach to Beethoven as he does to Dvořák.