Peedu Kass is an active Estonian instrumentalist and winner of prestigious awards such as the Elion Young Jazz Talent Prize in 2010 and the Sony Jazz Stage Competition in 2006. He is not only an accomplished musician but also the chairman of the Estonian Jazz Union since June 2014. His work and experience give him a broad overview of the essence of Estonia’s jazz industry, from musical education to local opportunities for musicians.

Powered by an avid passion for jazz music and its progression in Estonia, Kass performs in twelve different ensembles throughout the year alongside his position at the Estonian Jazz Union. His debut album, “Home”, has been praised by audiences and critics alike, and his band, Peedu Kass Momentum’s, dynamic Nordic sounds have landed them a spot in the 2015 Jazzahead Showcase in Bremen, Germany; known as the most important jazz music showcase in the world.

Not only is this an exciting milestone for the trio, which includes the double bass player alongside renowned pianist Kristjan Randalu and drummer Toomas Rull, but Peedu Kass Momentum will also be the very first Estonian group to have ever been selected. In an interview with the musician he makes insightful remarks on the artistic craft as well as the business and strategy behind the intricate web that is the “jazz scene”. 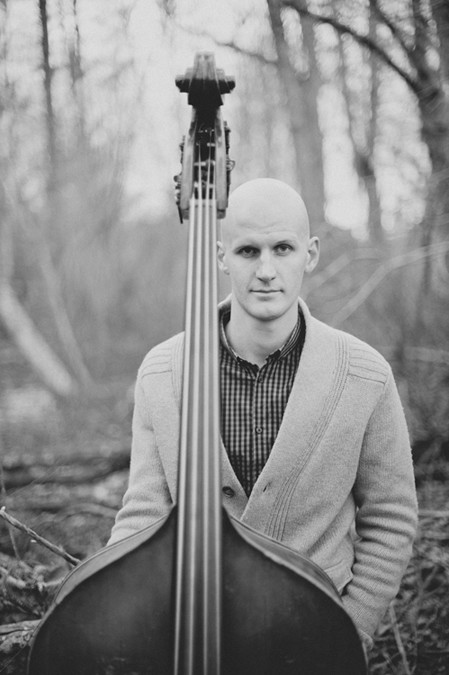 When considering his role in the jazz music scene and countless performances with the double bass, it may come as a surprise that Kass’s career in music began with the electric bass. “When I learned that the bass guitar and double bass were connected, I figured that if I want to be a versatile musician then I should learn to play the double bass as well.” Despite “not being really interested in jazz at the time”, as soon as Kass began learning the double bass, he discovered that “an acoustic, more chamber-like sound was interesting and potentially handy for future collaborations”.

In terms of his characterisation as a double bass player, it was in fact not a conscious choice. “People mostly perceive me as a double bass player because I got more calls to play the double bass,” he jokingly adds, “and in a way I am not very happy about it.” What he is happy about, however, is the discovery of his love for jazz, “I suppose it is the improvisational context which I enjoy a lot; it is great for personal expression. You can play the same tune with the same band for the fiftieth gig and still not know exactly what is going to happen.”

Estonia vs the world

When comparing local and international audiences, Peedu comments that “it is always nice to play in countries where the culture is more expressive and you can feel the energy of the audience from the first song on. The best audiences I have had were in Poland, Russia, and France where the energy exchange between band and audience is great. This helps the performer especially in an improvisational setting, as it is encouraging when you know that there is someone on the other side who is always reacting to what you are doing.”

Yet despite the small population of Estonians, there are advantages once you achieve local success. “The circle of musicians is like a nice family circle; it is cosy and the people you play with already have a history with you and a strong relationship. Also, the smallness makes it easier to gain opportunities to perform from a young age. The more experience you gain, the quicker you learn about how to adjust yourself to different styles, rules and audiences and the experience leads you to many opportunities.”

Despite participating as a part of many musical groups, Estonia’s size once again plays a role in his schedule. “With jazz bands performing in Estonia, even some of the best bands in the country only do ten gigs a year and that is already a lot.” Considering this problem, Peedu’s work for the jazz union is dedicated to creating new ways for the jazz union to expand on their activities. One of his major goals is to rearrange investments and save some funds. “These days, the main output is organizing club concerts which accounts for about 90% of what we do. I aim to reduce this to about 70% of our activities and focus on our other activities such as organizing bigger concert events and improving contact between musicians and organizations outside the country through export activities.”

“I am not a big believer in talent in this sense. I have seen a lot of talented musicians that don’t necessarily get too far with their music. For extremely talented people it is extremely hard to motivate yourself to work because they reach their goals easily; they can play whatever they hear in seconds, so why should they put the effort into practicing their craft two hours a day when it is easy anyway.” If it is not the inherent ability to learn things faster than others that make a musician successful, then what is?

The problem according to Peedu Kass begins at a very young age during the early stages of one’s musical education. “The problem with the ‘talent’ aspect in music is that in the old days talent was measured by how good you ear was and how well you can sing in a constant pitch. After studying music for so long I now see that this is such a shallow part of the combination of skills it takes to be a successful musician. When selecting young children at the age of seven in music school they should also evaluate coordination, memory, perseverance, working habits, concentration, rhythmic talent and overall creativity.”

Having been told that he could never be a musician because of an old fashioned definition of ‘talent’, Kass encourages aspiring musicians of all ages: “Do not be afraid if anyone tells you that you are not talented or that you need more talent to become a good musician.”

Despite learning an instrument in his late teens and being told he did not have the “talent”, Peedu Kass has become a pioneer in the Estonian jazz scene. Guiding his band Peedu Kass Momentum to Jazzahead! this year is merely one of the feats of the jazz enthusiast, who continues his efforts to put Estonian jazz music on the map.

Sarah Hamid is an American student of international leisure management who will be graduating in 2016. Having an international background, she has a strong passion for travel, adventure and learning through new experiences. She has gained work experience abroad in organising events in a Zambian hotel as well as co-managing a nightclub in the Netherlands. In addition to these places, she grew up in the US and Qatar, then lived and worked in Germany, Canada and Estonia.