Marie Under was one of the greatest Estonian poets ever lived; Estonian World publishes six of her poems in full.

Who was Marie Under and why is she so important for Estonians? Like many Estonian cultural greats of the turbulent 20th century, who lived during the oppressive Soviet occupation, her story is full both of joy and sadness.

Born into the family of a teacher from Hiiumaa in 1883, she showed a talent for literature from an early age, starting to read at four and write her first poems at fourteen. She studied German, French and Russian in her early years at a private German Language School (her education later helped her translate German poetry and drama into Estonian).

After brief stints working at the newspaper Teataja and filling her free time writing poetry in German (which, at the time, was considered the most important language in Estonia, due to the country’s history), she got married in 1902 and lived in Moscow for four years. During this period, it was the Estonian artist, Ants Laikmaa, who convinced her to start writing her poetry in Estonian. It is also believed that Laikmaa fell in love with her and he also painted many portraits of the poetess.

In 1904, her first poem was published by the Estonian newspaper Postimees, under the pseudonym Mutti. After publishing in newspapers, she blossomed fully into the literary scene with her first love poems collection, “Sonnets”, in 1917. 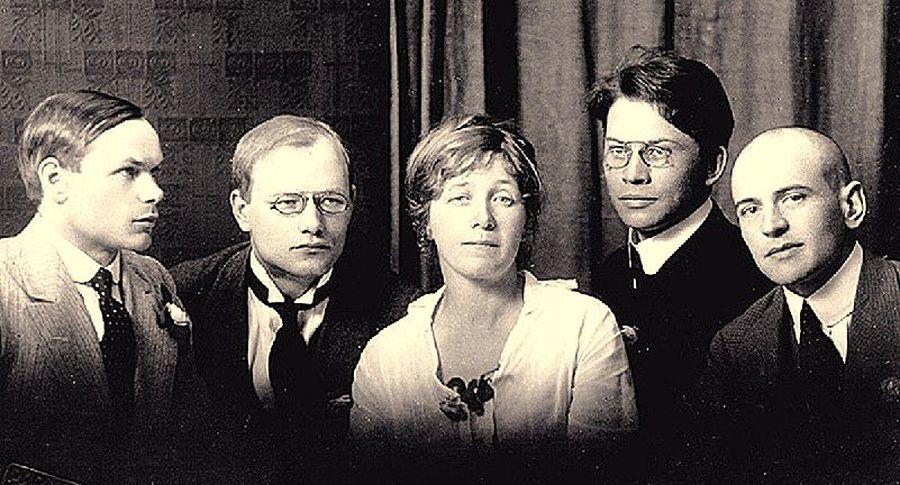 During the first Soviet occupation of 1940-1941, Under started to write very brave and patriotic poetry, compassionate towards the people who suffered deportations and war. This was the time when the whole nation fell in love with her and she became a sort of Estonia’s conscience – someone who had courage and ability to express the nation’s deepest feelings and sorrows.

In 1944, before the second Soviet occupation of Estonia, Under and her family fled to Sweden on a little ship and without ever seeing her homeland again, lived in Stockholm until her death in 1980. There, she worked for a short period as a part time archivist in the Theatre Museum at Drottingholm and was a member of the Swedish Writers’ League. She continued to write political and philosophical poems until the end of her long life at 97. 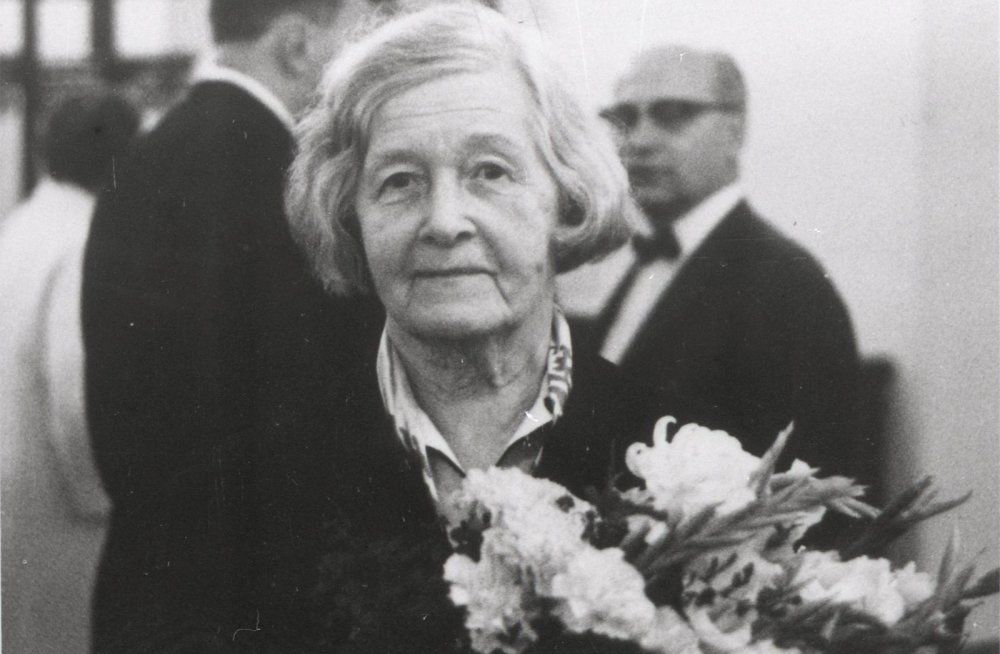 The publication and circulation of her poems was forbidden in Soviet Estonia and several Estonians even suffered prison sentences for possession of her books, quoting her poetry in their correspondence, or for reading them to others. Political illicitness only added to Under’s fame and increased the nation’s love of her poetry.

Her introspective poems found in the volumes “Hääl varjust” (Voice From the Shadows), “Rõõm ühest ilusast päevast” (The Joys of a Beautiful Day) and “Õnnevarjutus” (Eclipse of Happiness) are found to be extraordinarily intense and are considered among the best in Estonian poetry by literary critics. The main theme of her poems in her later years was the conflict between mankind’s desire for happiness, beauty and satisfaction and society’s lies, shabbiness, unfairness, power fixation and the general misery of mankind.

“Marie Under was the Estonian Goethe, our most influential poet of 20th century,” Sirje Kiin, an Estonian literary scientist, told Estonian World in 2013. “Under was nominated for the Nobel prize in literature thirty times after the Second World War, but never won. Many speculate that this was because Estonia was occupied by the Soviets and she was a political refugee in Sweden. Others have argued that there were not enough good translations of her poetry in other languages.” 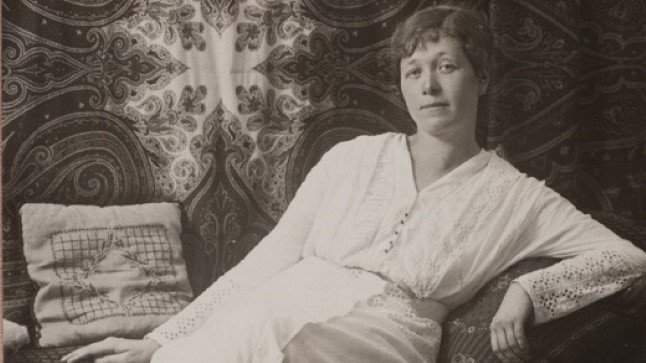 Sadly, there still aren’t enough good translations of her poetry available in English – but Estonian World is attempting to bring few examples of what’s available. Please note the poetry reads best in the language it is originally written in.

Over the garden the moon’s tide tumbles;
Shrubs are shaken by gusts and tremblings;
Pathways ribbon with sudden dissemblings
Towards the threshold where false foot stumbles.
Out of the soil of midnight, tender,
Lift my arms’ white tendrils and, weaving,
Motion to someone shadowy and absent,
Someone who tarries somewhere, perhaps may not be existent.

Oh, do I fear the days of torrid splendour,
Nights full of flowers? Oh, do I fear when I see that
These would not yield to the ultimate depths of my choosing?
My heart is breaking little by little
As a ripe pomegranate, skin parched brittle,
Breaks: full loving is prelude to losing.

Cords are unknotted, the covers have parted,
And I rise winged from where I have smarted.
Oh, do I fear now what heart discloses,
All these desires in fevered legions?
And shall I gather the pure cold roses,
Open and waiting in those white regions,
Towards which the days have died and the nights have faded,
And my blue sail wafts a burning soul that has loved as they
Did?

We saw those berries, over-ripe and glowing,
in weak and tepid light of the October sun
persisting red as blood, in right full-growing,
without much inkling of the winter clouds to come.

And then a wind-gust brushed those heavy bunches:
and some of them burst, falling to the ground
on wilted grass, soon after, under branches
gold leaves with purple berries lay around.

And hand in hand we walked uphill together
and pushed by the capricious wind’s bad weather,
eye to eye, as in anxiety, we asked:

our love’s moist, joyful red in present flowering,
will life’s wind carry it away, devouring,

or will it fall to the grave’s soil, and last?

I walk the silent, Christmas-snowy path,
that goes across the homeland in its suffering.
At each doorstep I would like to bend my knee:
there is no house without mourning.

The spark of anger flickers in sorrow’s ashes,
the mind is hard with anger, with pain tender:
there is no way of being pure as Christmas
on this white, pure-as-Christmas path.

Alas, to have to live such stony instants,
to carry on one’s heart a coffin lid!
Not even tears will come any more –
that gift of mercy has run out as well.

I’m like someone rowing backwards:
eyes permanently set on past –
backwards, yes – yet reaching home at last…
my kinsmen, though, are left without a home…

I always think of those who were torn from here…
The heavens echo with the cries of their distress.
I think that we are all to blame
for what they lack – for we have food and bed!

Shyly, almost as in figurative language,
I ask without believing it can come to pass:
Can we, I wonder, ever use our minds again
for sake of joy and happiness?

Now light and darkness join each other,
towards the stars the parting day ascends.
The sunset holds the first sign of the daybreak –
It is as if, abruptly, night expands.

All things are ardent, serious and sacred,
snow’s silver leaf melts on my lashes’ flame,
I feel as though I’m rising ever further:
that star there, is it calling me by name?

And then I sense that on this day they also
are raising eyes to stars, from where I hear
a greeting from my kinsfolk, sisters, brothers,
in pain and yearning from their prison’s fear.

This is our talk and dialogue, this only,
a shining signal – oh, read, and read! –
with thousand mouths – as if within their glitter
the stars still held some warmth of breath inside.

The field of snow dividing us grows smaller:
of stars our common language is composed….
It is as if we’d started out for one another,
were walking, and would soon meet on the road.

For an instant it will die away, that ‘When? When?’
forever pulsing in you in your penal plight,
and we shall meet there on that bridge in heaven,
face to face we’ll meet, this Christmas night.

I cry aloud with all my people’s mouths,
our land is smitten by a plague of fear and lead,
our land is shadowed by the gallows tree
our land   a common graveyard, huge with dead.

Who’ll come to help? Right here, at present, now!
Because the patient’s weak, has lost his hold.
But, like the call of birds, my shouting fades
in emptiness: the world is arrogant and cold.

The sighing of the old, the baby’s cry —
do they all run to sand, illusion, fail?
Men, women groan like wounded deer
to those in power all this is just a fairy-tale.

Dark is the world’s eye, its ear is deaf,
the powerful lost in madness or stupidity.
Compassion’s only felt by those whom suffering breaks,
and sufferers alone have hearts like you and me.

The door ajar, I stood at point of day,
Tiptoe for you and with awakened eyes.
The sun’s gold slipper trod the gravelled way,

The grasses spilled their dews in glad surprise-
And then you came out of a mist of flowers
That clung and swayed like knots of butterflies!

When afterwards we two, in softened hours,
Walked through the fields of rye all red for reaping,
I felt as if my heart obeyed new powers:

The old in me seemed either dead or sleeping,
And as I glimpsed the poppies’ fluttering fire,
An eager pleasure set my pulses leaping.

And you, these sang, could give me my desire.

Ah, earthly life burns in a myriad splendours
Not even death’s dark hazard can destroy.
I yield, a willing prisoner, to joy;
I never sorted with discreet pretenders.
And as the shaken glaucous wave engenders
Spindrift, so my green falling silks deploy
A froth, and all is stripped to the last toy,
And, caught in ecstasy, my sense surrenders.

Why does the blossom wanton in the light,
The blue horizon lure me to its border?
My body too is of their bent and order:
My every nerve vibrates to rapt delight,
And I distrain my life of its last treasure
As if my mounting days had brimmed their measure.