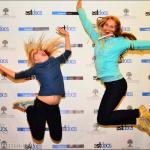 EstDocs is an annual not-for-profit Estonian documentary film festival and competition held in Toronto, that presents stories from Estonia. Its mission is to provide a 360-degree perspective on Estonian history, politics, arts, culture, sport, and other subjects.

This year’s EstDocs Festival raised its curtains on October 11 in Toronto and drew in over 1,300 audience members to witness unique Estonian filmmaking talent on the big screen in venues across the city. Mark Soosaar, a legendary Estonian documentary filmmaker, and Jaan Tootsen, a rising talent whose film “The New World/Uus Maailm” had its North American premiere at the festival, engaged with audiences each evening in provocative Q&A’s and discussions. Award winners for EstDocs 2012 were announced on its closing night of Tuesday October 16th. The Jury Award Honourable Mention went to Andy Stands Up//Andy astub üles directed by Elen Lotman and produced by Madis Tüür and Juriidiline Keha. The Audience Award went to Ballerina Blues//Sinine Kõrb directed by Ruti Murusalu and produced by Erik Norkroos, Priit Vaher and Umberto Productions, and the Jury Prize was awarded to The Colours of the Islands//Saarte Värvid directed by Madli Lääne and produced by Pille Rünk and Allfilm.

The Third Place Award went for “Kati and Me” – a lovely and humorous short film, created by a Canadian couple Kim Bagayawa & Mike Dell. It’s about how they discovered Estonia via their Estonian friend “Kati”. We have published the film at full length here – and highly recommend seeing it!

Video: short film “Kati and Me”.