Estonian writer Tõnu Õnnepalu’s Raadio was original published in Estonia in 2002, but this year Dalkey Archive Press has released Adam Cullen’s English translation of the novel. The book deals with universal human problems, including questions of isolation and identity, while also confronting more specific challenges of how to come back to one’s homeland after years abroad as well as introspective crises over sexual anxiety. Each of these themes, as well as Õnnepalu’s approach to fiction, were recently discussed during an event launching the English language edition of Radio at Waterstone’s Books in London’s Bloomsbury. 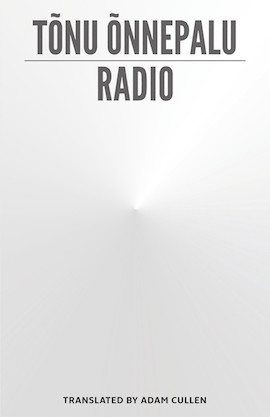 Õnnepalu begins by explaining the significance radio had and continues to have in his own life. He explains that radio provides a deeply intimate connection to the wider world which is crucial when living on a small island off of Estonia’s mainland, as he has done for many years. For Õnnepalu, who has never owned a television, there is a kind of immediacy to radio which can approximate the reality of being at a musical performance or having a personal conversation, something other forms of modern communication devices have never been able to replicate. It was the radio which the novel’s protagonist used as a means to answer questions about his own identity and to better understand the contradictions in society, something which appears to be partly based on Õnnepalu’s own experiences.

The novel’s protagonist is an openly gay filmmaker from Estonia who spent a decade living in Paris where he engaged in a one-off love affair with the aging diva Liz Franz. Upon arriving back in Estonia, he attempts to reconcile what he sees as the pomposity of consumerist Paris with the equivalent pomposity of Soviet Estonia. For those interested in a rather poetical (rather than merely political or materialist) interpretation of the contrasts between the capitalist and communist world, Radio will surely offer a great deal of stimulating material. Likewise for those wanting to explore how themes of sexual frustration and isolation were dealt with by one of Estonia’s most cutting edge novelists in the aftermath of Soviet rule, Radio also will prove an important reference point.

It was widely acknowledged that Cullen’s translation of Õnnepalu’s lengthy work was quite a difficult task, not least because there are not many professional translators of Estonian literary works. During the evening, the multi-lingual Õnnepalu was asked if he ever reads any of his novels in translation to see if a translator has correctly captured the original text. Õnnepalu responded that he does not, but rather prefers to put his full trust in the translator even when he is literate in the language into which his novel is being translated. He did however offer an amusing anecdote about when a Taiwanese reader discovered one of his novels in Paris and decided to translate it into a dialect of Chinese based on a conglomeration of the French and English translations. Noting some discrepancies between the French and the English (and not being literate in Estonian), the man sent Õnnepalu questions so that he could clarify which meaning got it closer to the original. This was one of the only times Õnnepalu actually examined his works in a language other than Estonian.

After the event Estonian World asked Õnnepalu further questions about his novel and his general approach to writing.

In a certain extent it is absolutely normal and human to have an identity crisis at one or another moment of your life. It is to ask: who am I, what do I believe, is it real what I’m doing and looking for, or is it just a play, a role? Often it is not so conscious, it just happens in a way and takes a form of, for instance, a divorce, changing (not very wisely always) one’s profession or the place of living. The person tries to move from the situation that seems not to be true to a more real one. But perhaps it is not the outside situation but one’s own attitude toward it that is not true?

Of course, there are moments when a whole nation passes through an identity crisis, like it happened in Estonia in the beginning of 90ies. There were ideals: many people somehow believed that the beautiful (idealised in the false memories) life of the time before the war comes back with the restored republic. Of course, then happened a clash between the beliefs and reality. In fact it gave a great dynamics (even if sometimes unhappy) to the society. There was much creativity, much seeking. In everyone’s life this kind of collective crisis takes a personal form. It may lead to something new; it may lead to bitterness, drinking, suicide, to many things. But altogether the life of a human being is made up of crises. Childhood, school, puberty, love, getting old, dying etc.

It is generally admitted that the people at the marge of society are more apt to have an identity crisis. Ie, gay people. It is a half-truth. If you are different from what a woman or a man is meant generally to be at this very moment of the time, you may start to reflect yourself more, to ask more, who I am and why. A person who believes he is totally “normal” asks more about others than about himself. This is his way to have an identity crisis. It may take a form of hatred, of being very critical toward some other people. But still, it is an identity crisis, it may be even harder as it never names itself, is always seeking an outside object that is always a false object. So one may die in bitterness and hatred, just because one never faced one’s own identity crisis and searched always the reasons of unease and unhappiness from among the others, from outside.

A writer must, in any case, face his own crisis, ask about who he is; must at least try to be honest towards himself: it’s the only justification of being honest towards the others (which is seldom pleasant).

What would you say are the main frustrations of the protagonist in Radio?

His main frustrations are his ideals. They are too high. His ideals are impersonated in the figure of Liz Franz, a famous chanteuse whom he idolatred in his early years. The real Liz Franz is never at the height of the ideal one, even if she is sometimes surprisingly better and cleverer than the protagonist has believed. And so about himself, his loves. They are always disappointing. His main task is to learn to face the life and himself directly, not through the perverse glasses of ideals. This is a hard and painful task, but he makes a small progress indeed. Thanks to Liz Franz, her disappearing from his life, he has to remake it without.

How personal a novel is Radio?

It is very personal, like all my novels have been. And it is not at all, like all others. I have used my own experience to build up the main character, but it is not me; it’s a character, often he is and acts and believes in the opposite way than I would. It’s like in theatre: an actor builds up a role on the basis of what he or she is. There is no other basis. But the role is not him or her. It’s a way of reflecting what one is and what one might have been. We have many possibilities in us, better and worse of what we are in reality. Acting in the play or writing a book is a harmless and sometimes useful way to live the possibilities you have but you never realise (and even don’t want to realise). It’s a curious experience to be somebody else – who is still yourself. There are all the others present in us, but happily and unhappily we live in the narrow limits of what we really are.

Do you think non-Estonians would have radically different interpretations of Radio than Estonian readers?

In some topics, most certainly. An Estonian reader takes more personally and perhaps more painfully the relationship that the protagonist has with his national identity, with his country, its culture. For a reader abroad, they are just a country and an identity, a culture. He knows much less about them, but thus he may better catch what really matters in the books. It’s finally not so important that it happens to be Estonia. Well, it is important, but still. I would like myself to be such a reader who knows little about the realities that are in the book. It would be a fresh sight. Some things are more clear while we look from the outside, from the distance.

What excites you most about having your novels translated from their original Estonian?

Most exciting are the unexpected reactions: often the faraway readers see very sharply the main reason why I had written the book. They have told me very interesting things about myself and my writing. It’s a great privilege to have such remote readers. Otherwise, the readers are similar everywhere, as they are human beings and book readers (which is a universal tribe). Everybody reads oneself in the book, not the author. Being author is a possibility to meet different people through the books you have written. It’s a nice and precious possibility.

Radio is available on Amazon.