Estonian filmmaker Ülo Pikkov’s newest puppet animation film, “Empty Space”, presents a story forged in the dreams of a father hiding from the Soviet terror. The animation is a reconstruction of a vision on the backdrop of the anxieties of the 1950s in the Soviet Union.

This article is published in collaboration with the Estonian Film Magazine.

“Empty Space”, which recently won the jury award at the EstDocs film festival in Toronto, Canada, talks about memories, dreams and longing. The director takes the viewer on a journey to the beginning of the 1950s. Starting with little Merike playing at home on a Sunday morning, the story of one of the most heinous chapters in Estonian history delicately unfolds. The animation invokes a past memory, an apartment that once existed and a small girl dwelling and playing there.

Where did you get the impulse to make “Empty Space”?

That’s a long story. Per chance, I met a woman who is over 70 years old. It turned out that her father was an officer in the Estonian Army during the “first republic” (the pre-Soviet occupation Estonia – editor). When the Soviet Union occupied Estonia, the Estonian Army personnel was automatically absorbed into the Soviet Army. Her father was sent to the front and became a prisoner of the Germans, then freed a while later because there was no real crime to prosecute him for.

When the Russians occupied Estonian the second time, the interrogations began. Her father was afraid that he would be sent to prison or deported to Siberia. So, he built a hideout in the cellar where he spent ten years. And as not to go stir crazy or actually crazy, he crafted a miniature copy of his former home – over two hundred pieces in all.

His daughter was three months old when he went into hiding and 11 when he re-emerged. The daughter later said that her father probably wouldn’t have gone hiding if he’d known he would be down there for that long. It’s possible he only wanted to hide for a few months, but they came to search for him with dogs and so he stayed…

So, is the film based on the daughter’s story?

Yes, the film is based on the daughter, whom I interviewed many times. Back then, she didn’t know her father was alive, of course, because she might have accidentally told someone.

When her father came out of hiding because he was sent word that the Forest Brothers were given amnesty after Stalin’s death, he gave the miniature copy of his home that he had made underground to his daughter as a gift. Of course, the girl was very happy to find her father alive as until then, she’d only known that he was dead and she wasn’t to talk about him. But when she saw the doll furniture, it made her sad because she knew that she was a big girl already and the time for playing with dolls in her life was over. 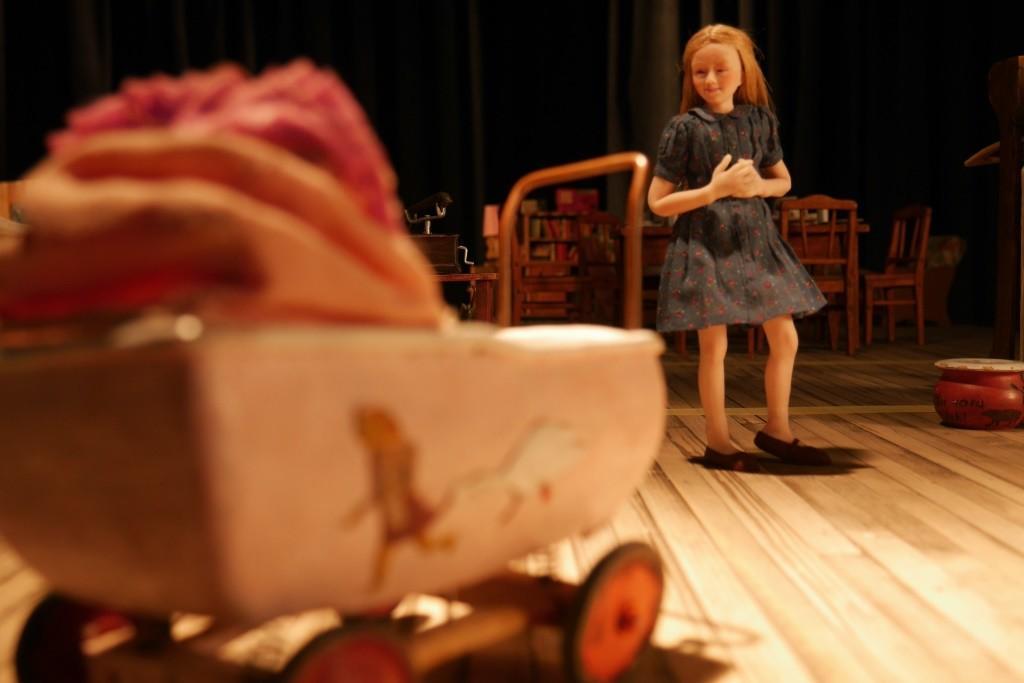 In some ways, the film is a realisation of the father’s dream – of him building the doll furniture so his daughter could someday play with it. And since the furniture was an exact copy of his own home, I’m sure he could see his daughter moving around it in his imagination. For the film, we made a realistic copy of Merike as a little girl based on pictures of her and placed her in that very same furniture that her father made. We tried to be as authentic as possible – the radio plays shows from that era etc.

Is all of the furniture you used made by her father or did you make some of it yourself?

One of our main principles was not to make anything new or to change anything. We used all of the pieces made by her father and added nothing but the doll made based on old photographs. And if some of the items were a little broken – nails were sticking out etc. – we didn’t fix them. 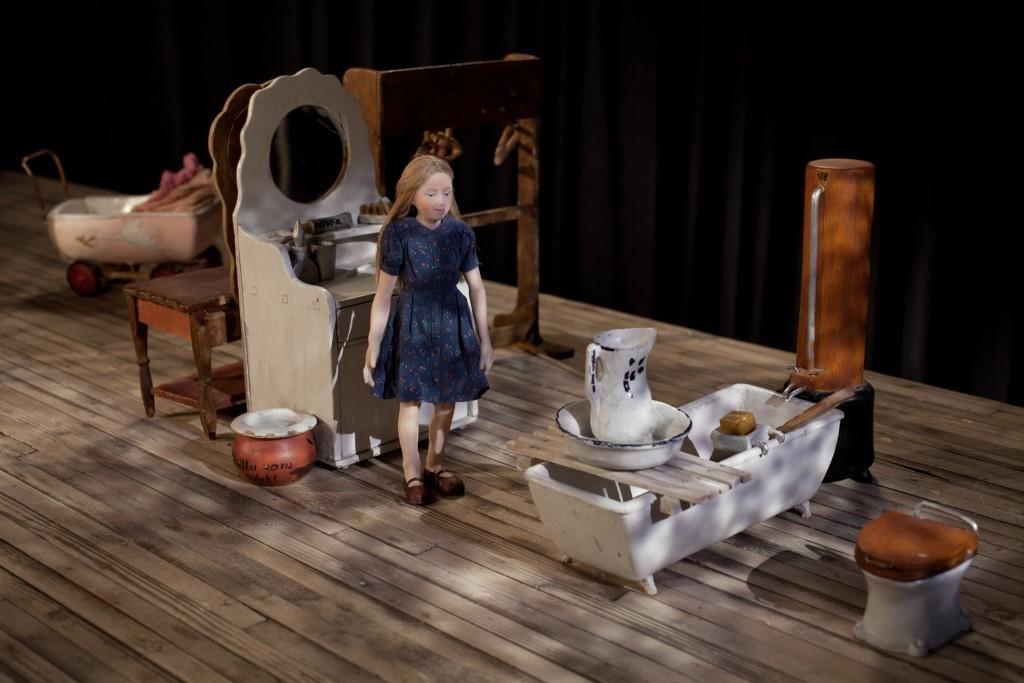 How long did it take to make the animation?

The technical side didn’t take long, maybe half a year in all. But developing the project and preparations took longer, of course.

Your latest animations (Body Memory, Tik Tak etc.) talk about the themes of time, the historical memory and Estonian history. What draws you to these issues?

It’s sort of just turned out like that. I’m interested in an animation film having elements of documentary in it; I want to combine the two genres. There have been tons of animation films about someone going somewhere and then something interesting happening to him. I’m interested in the symbiosis of animation film combined with the aesthetics of documentary. That’s the wave I’m on right now; it’s what inspires me. And I’ll keep working through that in my next projects.

You’ve studied drawn animation and are quite successful in that field. But now you’ve been making puppet animation films for years. Why draws you to the puppets?

The story is important, and then comes the technique. There was no way I could make “Empty Space” with drawn animation. I guess all creative people are looking for their path, searching for what direction to go. Right now, I like real materials and the stories, memories and experiences that things hold. There’s something mystical in that.

You were a lecturer at the Estonian Academy of Art for a long time until this year. Are you no longer teaching anywhere?

The Estonian Academy of Art exhausted itself for me and now I don’t teach anywhere. But my book, Animasophy (2010), will soon be published in Czech and I’m in negotiations for translations into Chinese and Hungarian. So, in some way, the texts I wrote as a teacher will live on. I’m also about to finish my doctoral thesis on the unique characteristics of Eastern European animation films. 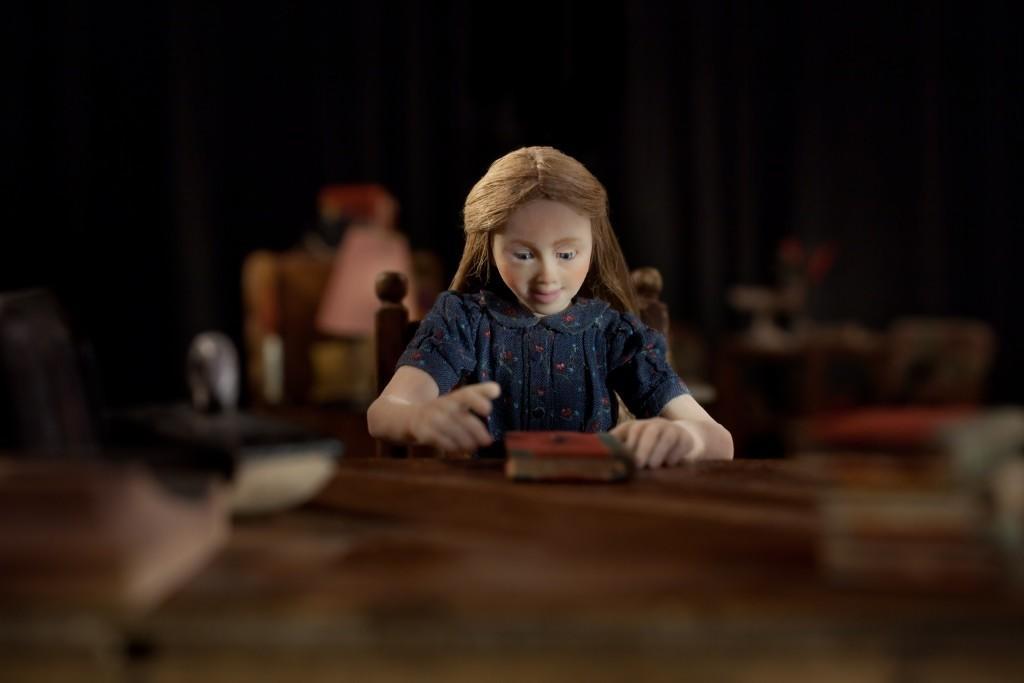 I’m also active at the Creative Lab of the University of Tallinn Centre of Excellence in Media Innovation and Digital Culture (MEDIT). The Creative Lab is working on a very interesting challenge of trying to combine modern technical solutions with traditional methods of storytelling.

You also work as a producer?

Yes, I make animation films, but I’ve mainly produced documentaries. Right now, I’m working on a project called “Roots” that is being directed by six women. It’s one of the documentary projects that took part of the 100th Anniversary of the Republic of Estonia projects and should premiere in 2017. Of earlier projects, I was the producer of Flowers from the Mount of Olives (2013), which premiered at Locarno.

What are you working on now?

I’m developing a story about letting go. The film takes a slightly different approach where the process may even be more important than the result. There’s an ancient tradition in Japan called hinamatsuri. If you have a bad experience or a trauma of which you want to let go, you make a doll and a boat and send them off to sea. There’s a person with a broken soul who grew up in an orphanage and who is trying to start an independent life. She has no previous experience as a filmmaker. I plan to work with her to make an animation where a boat and a doll are made and they’re actually sent out to sea.

It’s a partially improvised process and could even be called animated therapy during which a very personal story is also told.

2007 Tablemat of the Baltic Sea

2013 Flowers from the Mount of Olives (documentary)

2011 Breakfast on the Grass (animation)

2010 A Letter from Ruhnu (documentary)

In addition to writing and illustrating several children books, Ülo Pikkov is also the author of “ANIMASOPHY. Theoretical Writings on the Animated Film” (The Estonian Academy of Arts. 2010)

Maria Ulfsak works as a film critic at Estonia’s second biggest national weekly newspaper Eesti Ekspress. She studied journalism at the University of Tartu and has a master’s degree in film studies from the University of Warwick. Maria has also worked as a programmer for the Tallinn Black Nights Film Festival and the Baltic Event Co-Production Market. Her works have been published in almost all of the most influential newspapers and magazines in Estonia.