This article is in relation to the recent Estonian-French movie “An Estonian Lady in Paris”, directed by Ilmar Raag. The film tells the story of Anne (Laine Magi), a divorced 50 year-old woman who leaves a small Estonian town to care for an elderly woman in Paris, a free-spirited fellow Estonian who emigrated to France long ago, in the 1930’s. Anne soon realises that she is not wanted. All Frida wants from life is the attention of Stephane, her younger lover from years ago. Stephane, however, is desperate for Anne to stay and look after Frida, even against the old lady’s will. In this conflict of strangers, Anne finds her own way…

I recently had the chance to watch a film on the Finnair flight. Three films, in fact. The other two are not worthy of discussion, not only because they had nothing to do with Estonia, but because they were so outrageously stupid (The Campaign and The Hangover), although this reverence for stupidity is among the sturdiest pillars of Americanness. 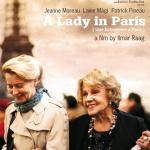 An Estonian lady in Paris (Eestlanna Pariisis) is not a stupid American film. It is a quiet, brooding European film and it made me cry. Maybe that happened because I was so exhausted. But there was something about the way that the main character Anne’s (Laine Mägi) life in Estonia was portrayed — the jobu (jerk) drunk ex-husband, the spacey grandmother with dementia, the silent funeral with vodka shots, the unrenovated apartment with Soviet furnishings, the primped, self-absorbed kids who couldn’t stick around for a funeral because they had to go to work, not to mention all the darkness and snow —  that brought me to tears, probably because it was so accurate.

My sister-in-law’s mother-in-law really does have a dementia and lives at home. We do have close relatives whose lives have been destroyed by alcohol. Most of the 80’s and 90’s-born youth in our Estonian family (“Republicans” as the Estonian writer Andrei Hvostov describes the rising generation of Estonian youth that has no memory of the Soviet era) have adopted global personas and fantasise of a new, hipper existence at the center of it all in New York or London. Goodbye Põltsamaa, hello Paris!

But as Anne finds out, Paris isn’t much better than Tallinn. She trades one jobu (jerk) at home for another abroad, in this case nasty old coot and Estonian exile named Frida (Jeanne Moreau). I hate to say it, but I think Estonians were proud that the aging film legend Moreau appeared in an Ilmar Raag film with the word Estonienne in the title, that Frenchness itself could coexist with Estonianness in such a mopey and intense European manner. Moreau didn’t speak Estonian in the film, except maybe an attempt at “Tere,” but a lot of exiles have left their linguistic identities behind, as I have seen time and again.

It’s the, “Wait, this isn’t a dream?” phenomenon. Estonia feels like an island, you see. Water and swamps all around. When you leave, you start to wonder if it really exists. It made my heart stir a bit to hear Estonian and French spoken in the same scene, not only because it proved that Estonia is real, but because Mägi has superb diction and I could understand every word, so unlike Seenelkäik (Mushrooming), another film from the past year, where actors Raivo Tamm and Juhan Ulfsak’s muddy and impenetrable baritones made my wife our official translator.

Mägi also played her body well. There were messages in the simple ways she removed trays of food or cleaned up an intentionally spilled cup of tea. Mägi has a thin, elegant frame and as she doesn’t say much (many Estonians aren’t big talkers), so she has to use her movements to fill scenes with the emotions required (humiliation, determination, loneliness, apprehension). I did find some of the Frenchness in the film overplayed (the fresh croissants, the fashion), but I can’t criticise that, considering I did some of the same things in my novel Montreal Demons (“behold, the boulangerie, the thigh high boots!”). Plus, this is a film geared to ladies who go to the cinema with other ladies, not to the audience of The Hangover or The Campaign, or even Seenelkäik, i.e. guys like me.

So, is it a great film? I am not a film critic. Maybe it was terrible. But I liked it and it had an effect on me sitting up there above the cold clouds and strong gusts of Greenlandic wind. Yes, I liked it.

This article was first published by Justin Petrone blog.

Justin Petrone’s book My Estonia is out now.