According to a recent analysis by the Bulgaria-based Open Society Institute, Estonia ranks fifth in Europe in media literacy.

The institute says in its study that the best equipped countries to resist the post-truth, fake news and their ramifications are the Northwestern European countries – ie the Scandinavian ones, the Netherlands as well as Estonia and Ireland.

“This coincides with other findings and expert opinion singling out these countries for their capacity to hold out to the fake news. Estonia’s performance is telling – it has both excellent education score and free media and is standing out at the background of other CEE countries,” the Open Society Institute notes.

The lowest scoring countries are in Southeast Europe – all the way from Croatia to Turkey – as well as their close neighbours Hungary and Cyprus. “As a rule, the reasons for the low results are poor or mediocre education performance and controlled (not free) media. Such countries are most likely to be vulnerable to fake news and ensuing negative effects,” the analysis says.

“As a rule, the highest scoring countries would have the best education performance, the most free media and high trust among people in society,” the report continues. “The countries at the bottom of the ranking have low education scores, more controlled media, and in generally low trust among people. These may be of different proportions, eg in the case of Turkey the overall result is due more to very low media freedom score, while in the case of Macedonia the main problem is its lowest education score.”

The index is topped by Finland, followed by Denmark, the Netherlands and Sweden. Latvia is ranked 17th and Lithuania 20th. 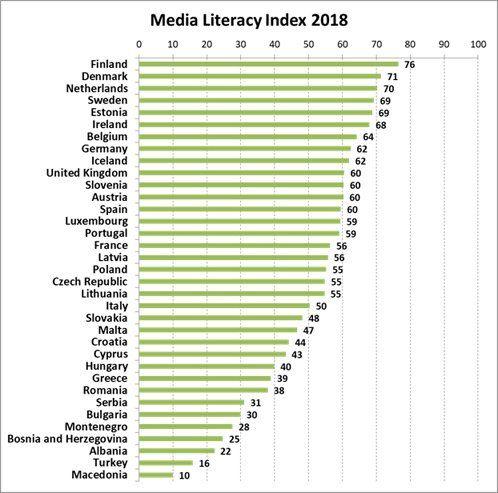 The Open Society Institute is a Sofia, Bulgaria-based non-governmental organisation, acting for the public benefit, defending the values of the open society in Bulgaria and supporting the integration of the country to the European Union. The Institute was founded in 1990.

The cover image is illustrative (courtesy of the Science magazine).