The Estonian-founded RocketFuel Scholarship, worth €1,000, helps those who want to learn some 21st century skills all by themselves, taking advantage of the multitude of online resources out there.

“If you come from the humanities background like me and want to start programming, you’ll instantly get confused: there are so many options that will lead you somewhere – but where?” Michaela Snopková (25), one of the winners of the RocketFuel scholarship, poses a rhetorical question. “Where should I start from? I would love someone to come and explain to me: OK, this is JavaScript, this can be used for these things… etc. Also, many of the real-time courses in Estonia are for teenagers and when I’ve asked if I can just listen in, they’ve told me that I’m too old! At 25?!?”

This was how she came across an ad for RocketFuel, applied and was awarded a scholarship, which, on top of the up to €1,000 access to online courses will provide her with the mentoring of the impact makers who help her stay focused and keep an eye on her progress.

Michaela is from the Czech Republic and now lives in Estonia. During her bachelor’s studies in political science in Dijon, France, she had to choose a country where to spend one year abroad. “As Russian was my foreign language and I was interested in the area formerly occupied by the Soviet Union, I chose the University of Tartu that offered a course on the EU-Russia relations.”

While she was already here, she decided to learn some Estonian and started to like it so much that she picked an intense course – and never made it to that EU-Russia relations course.

She went back to Paris to conclude her master’s studies, but has now settled in Estonia and works as a project manager for the Estonian Institute of Historical Memory, on a project called “Kogu Me Lugu” (All of our Story). To this day, they have collected more than 200 stories of people living both in and outside of Estonia that can be used for history classes as well as by researchers on recent history.

Doing her work, Michaela realised that a lot of things she does manually could be automated, not just for her work but overall. “For example, the national curriculum on history is based on specific keywords. In the interviews, if they mention these words, we would write down their time code and would then upload it to the website and people can search the keywords. Therefore, analysing one one-hour video takes you up to four hours, something the machines could do a lot faster.”

Solving your own problems with tech

This was how Michaela got interested in data science and data analysis. And now, all of a sudden, all those books she remembers her brother reading back in her teenage years made sense. “He started programming when he was 14 and I remember him looking for books which had really weird titles for me, like C++ and others. Back then, I knew only my books on ‘proper topics’ like political science and history.”

She has no illusions about the time frame and knows that if one wants to become a professional data scientist, it will take time. But she is very willing to learn. “Last spring, I took a course on C# and had this ‘aha!’ moment when I understood I had already been learning coding through my statistical courses, but nobody had told me that. Then I realised I wanted to learn more and started to look for courses online.”

From her own experience, Michaela knows that learning to code is similar to learning any new language. “First you learn the alphabet and then you can read a book; now I’m dreaming about reading a book, but I don’t know the alphabet yet.”

She has already passed the first half of the massive open online course, “Down-to-Earth Programming”, offered by the University of Tartu and funded by her scholarship – it took her around four to five hours per week. Every time she sees a piece of code, she tests it out, as sometimes the course organisers would put in the wrong code deliberately to put the students to the test.

As she is now eager to take up an extra load of online learning, one will ask about her plans for the future. Does she see herself turning into a “real” IT-person? “I would not see myself working in IT yet, but still somewhere in between, finding an environment that would link the two worlds.”

Moving at your own pace

Andrei Klevtsov (14) is one of the youngest people to have been awarded the RocketFuel scholarship so far, since the applicant has to be at least 13 (there is no upper age limit). He is one of those bright teenagers who sometimes finds regular school too boring and is therefore looking for extra learning sources online. “One of the biggest advantages of the online courses is that you can choose your own pace.” So far, he’s passed one-third of an 80-hour gaming course and is now looking into another 3D gaming course.

Andrei is a student at the Tallinn Tõnismäe Science School and his favourite class is math. “It is just so much fun for me,” he explains. But the programming class his school offers as an extracurricular activity is not challenging enough for him, and the arts and crafts class, where they do 3D modelling, is also far too easy. For many years, he’s been going to a drawing class at an art school and is now also taking an animations course. 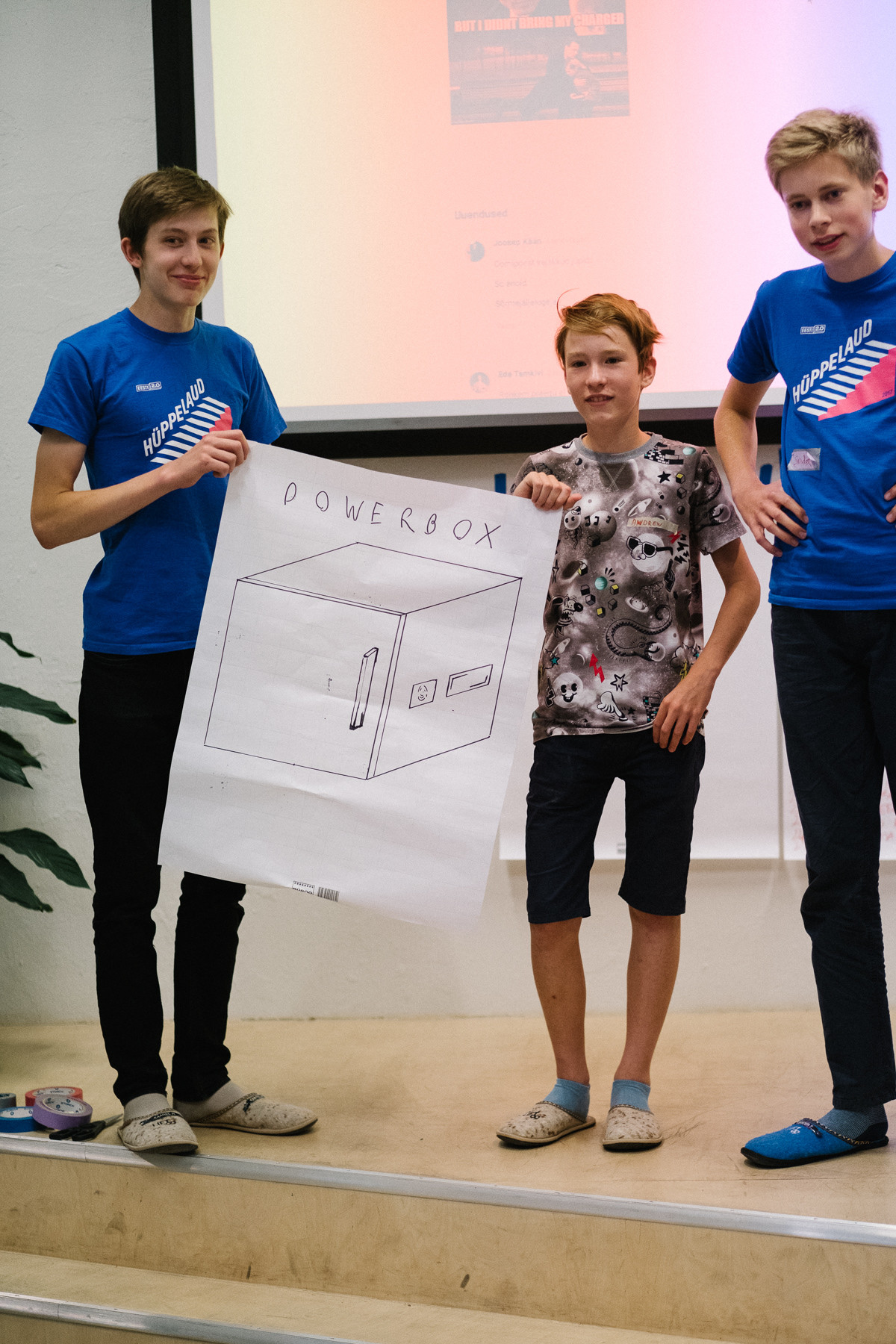 He got a new boost for his interest in technology in Hüppelaud (Springboard) summer school, organised by Eesti 2.0 – he was on a team that built the PowerBox, a fingerprint-lockable charging station for phones. “Every school should have similar events to Hüppelaud, because this offers some really good practice,” he claims.

Besides putting his previous interest in Arduino-based programming into practise and learning some new tech skills, he also got to practice his Estonian among his peers which he found very helpful.

Since the summer of 2018, he’s teamed up with his Hüppelaud teammates on their online-gaming platform, Considero, learned C# programming and has created his own games – mostly for PC but one for mobile as well. But he’s still a bit shy to share the games he’s created. “I’m not pro enough yet,” he says and will therefore keep on learning and we will definitely be hearing more about him soon.

At least 19 more scholarships to be granted

So far, six RocketFuel grants have been allocated to students from Estonia and Ukraine but there are at least 19 more scholarships to be granted.

“The aim of this grant is to bring more people into the startup world,” Ragnar Sass, the initiator of the scholarship, who is also the founder of Tallinn-based co-working hub, LIFT99, and a cofounder of Pipedrive, says. “If someone has the drive to learn something new and get somewhere, they should not be stopped because of the lack of money. A RocketFuel scholarship will give a boost to those who relate to IT and the startup world and the €1,000 could be spent either on studies, such as the online courses, necessary course materials, such as books or hardware.” 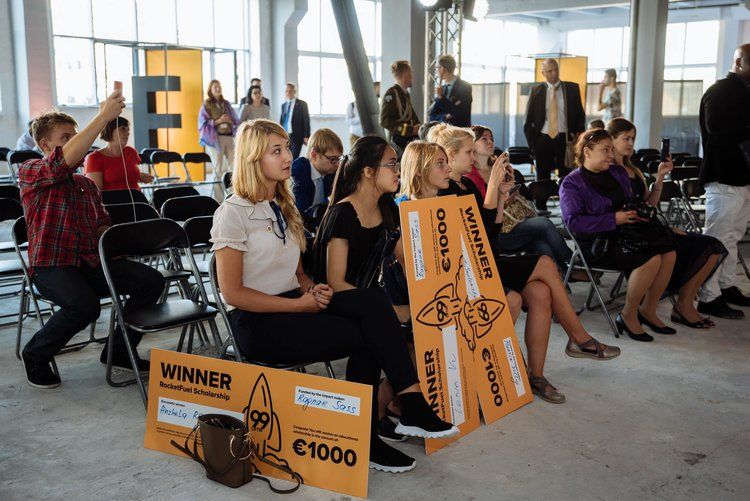 The grants have been provided by several Estonian startup founders – among them Kristel Kruustük (Testlio), Markus and Martin Villig (Taxify), Kaarel Kotkas (Veriff) and Ragnar Sass.

If selected, the applicant can pick the courses they find most useful and, in addition, will get mentored twice for a one-hour session during the course of the studies by one of the experienced founders.

Ede Schank Tamkivi is an Estonian author and journalist. She currently lives in Estonia and runs Eesti 2.0, a non-profit organisation that aims to inspire the next generation of Estonians to choose a future in technology. Previously she was editing Eesti by the Bay, a website for and about San Francisco Bay Area Estonians.