On 23 July 1940, the United States’ acting Secretary of State, Sumner Welles, issued a declaration that condemned the Soviet Union’s aggression against Estonia, Latvia and Lithuania. It became to be known as the Welles Declaration and for the next 51 years, it formed the basis for the American refusal to recognise the Soviet occupation of the Baltic states.

The declaration was issued in response to the 30,000-strong military invasion of the Baltic states, ordered by the Soviet communist dictator Joseph Stalin in June 1940, in accordance with the secret protocol of the Soviet Union and Nazi Germany, the Molotov-Ribbentrop Pact.

The US condemns the Soviet annexation

The Welles Declaration clearly stated that the invasion by the Soviet Union, which soon led to the annexation of Estonia, was unacceptable and initiated its refusal to recognise the legitimacy of Soviet control over these three states. 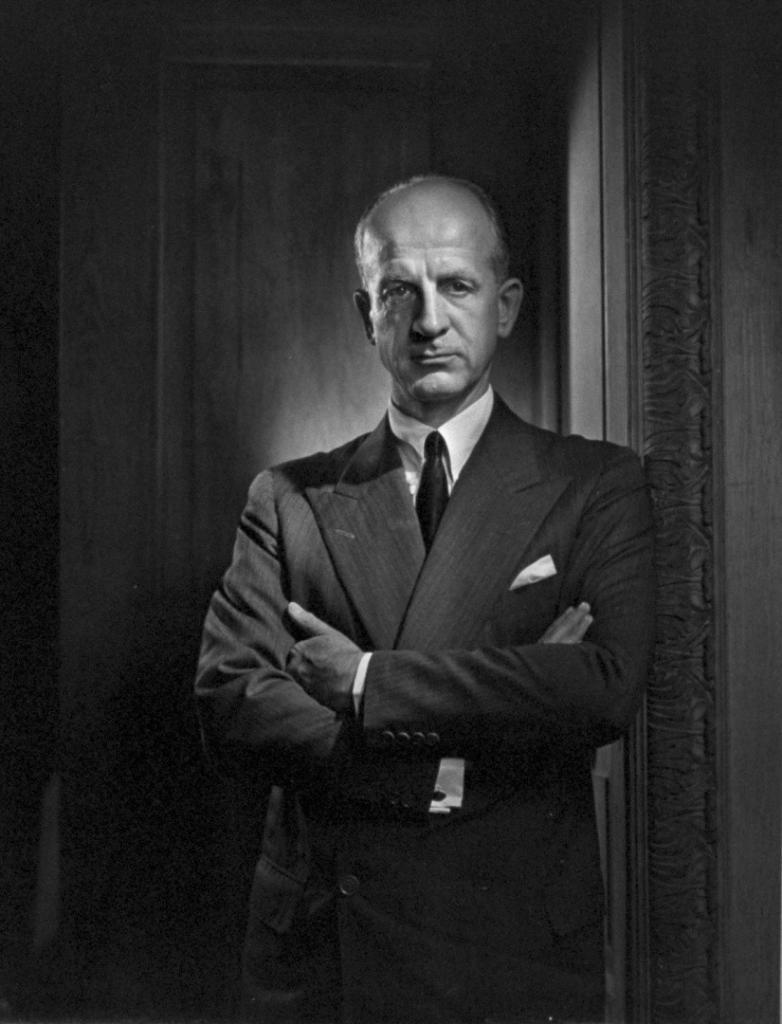 The US president at the time, Franklin D. Roosevelt, also authorised Welles to issue a strong public statement, while getting personally involved to write the declaration.

The actual text, while consistent with Roosevelt’s attitude towards territorial expansion, was written by another US diplomat, Loy W. Henderson, who was married to a Latvian woman and had opened an American Red Cross office in Kaunas after World War I.

After reviewing the statement’s initial draft, Welles expressed his opinion that the wording was not strong enough. In the presence of Henderson, Welles called Roosevelt and read the draft to him. Subsequently, Roosevelt and Welles agreed that it needed strengthening. Welles then reformulated several sentences and added others which apparently had been suggested by the president. Henderson later stated that Roosevelt was indignant at the manner in which the Soviet Union annexed the Baltic states and personally approved the condemnatory statement issued by Welles on the subject.

The declaration was made public and telegraphed to the US embassy in Moscow, thus establishing five-decade-long non-recognition of the Baltic states’ annexation by the United States.

Due to the significant power and role of the Soviet Union in the war against Nazi Germany, the US was unable to confront the Soviet Union militarily in the region, but the Welles Declaration, described by the New York Times in 1940  as “one of the most exceptional diplomatic documents issued by the Department of State in many years”, enabled Estonia, Latvia and Lithuania to maintain independent diplomatic missions in the US, while their financial assets were also protected until they regained independence in 1991. 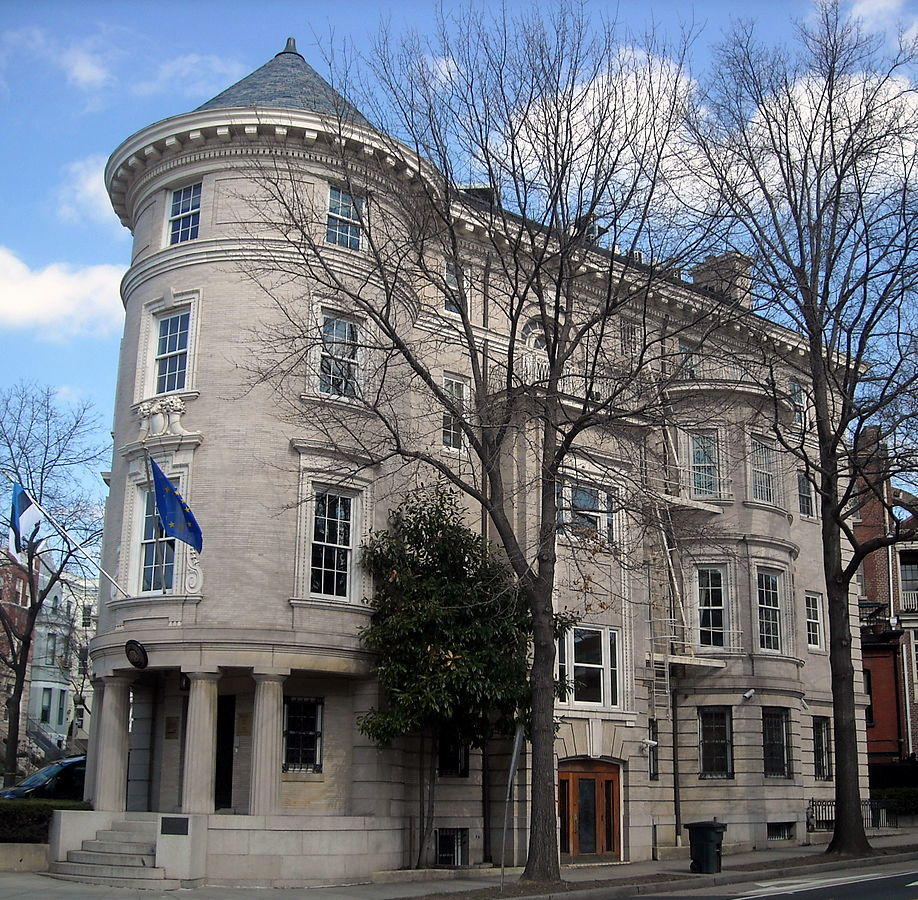 The US position that the Baltic states had been forcibly annexed would remain its official stance for the following 51 years. Subsequent US presidents and congressional resolutions reaffirmed the substance of the declaration.President Dwight D. Eisenhower asserted the right of the Baltic states to independence in an address to the congress in 1957.

On 26 July 1983, on the 61st anniversary of de jure recognition of the three Baltic countries by the US in 1922, President Ronald Reagan re-declared the United States’ recognition of the independence of Estonia, Latvia and Lithuania. The declaration was read in the United Nations as well. Throughout the 51 years of the Soviet qccupation, all US official maps and publications that mentioned the Baltic states included a statement of US non-recognition of Soviet occupation.

John Kerry, the current US Secretary of State, said on the 75th anniversary on 23 July 2015 that the Welles Declaration was more than a temporary symbolic gesture.

“From 1940 until the full restoration of Baltic independence half a century later, the flags of Estonia, Latvia, and Lithuania continued to fly in Washington, just as their peoples continued to believe that the day would come when liberty returned,” he said in a statement.

“Throughout the long years of Soviet occupation, the commitment of the United States to Baltic freedom never wavered. In the time since, America has watched in admiration as the Baltic nations have built strong democratic institutions and taken their rightful place within the European and Trans-Atlantic communities,” he added.

While speaking at the symposium dedicated to the 75th anniversary of the Sumner Welles declaration and unveiling of the memorial plaque in Tallinn, the Estonian foreign minister, Marina Kaljurand, also acknowledged the role of the US non-recognition policy in the restoration of Estonian independence. Kaljurand emphasised that non-recognition continues to be topical today in connection with the illegal annexation of Crimea by Russia and the situation in eastern Ukraine. 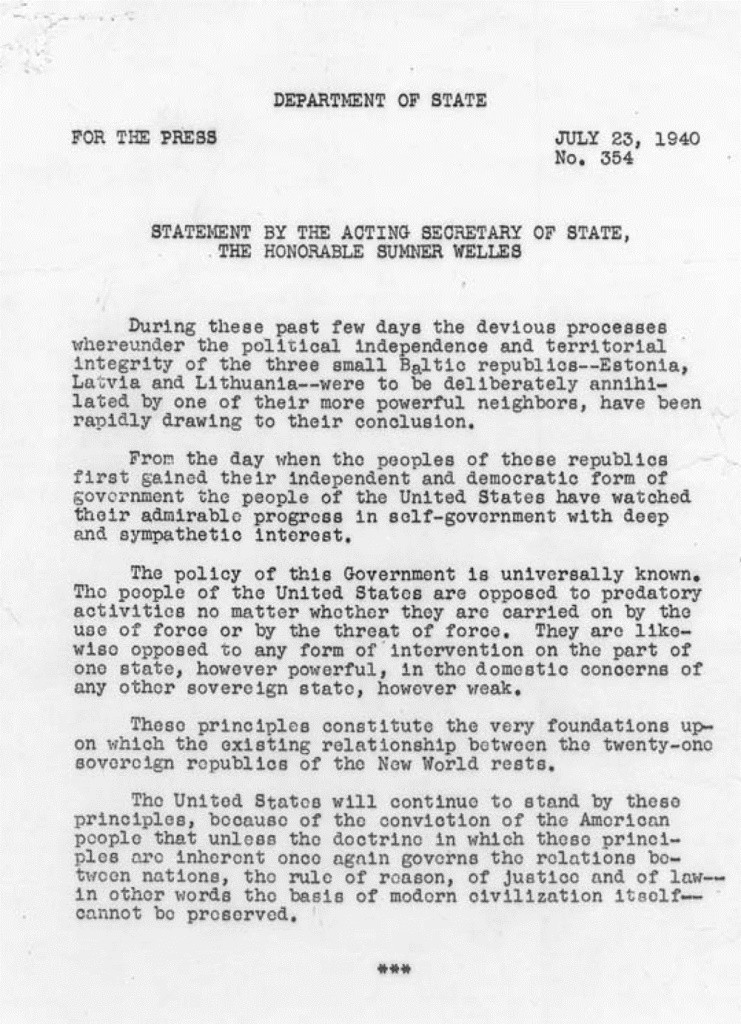