Katrin Winter taught Chinese in Xi’an, China. Here she writes what’s it really like to live and work in China.

I arrived in Xi’an, China in January 2013 with my Zimbabwean husband David. Our primary reason for coming to this faraway and foreign place was to learn Mandarin, which is going quite nicely. We also wanted to experience a different life, away from the daily routine we had fallen into in the UK and just to see a different part of the world. We both teach English at a language school to pay for this adventure and to keep us busy.

I grew up in Võru and lived in the UK for seven years after graduating from high school back home. When I tell the locals in China that my country has just over a million people, they usually burst out laughing. I dare not to mention that my town’s population is a mere 14,000. 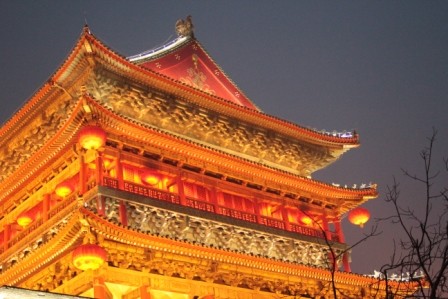 Before we arrived in Xi’an, which is in the centre of China, we were told it’s a very traditional town. Nothing more was explained, so I expected to find a lot of history and culture, which I have. But the people are also traditional, meaning most of them are not used to seeing foreigners, so I get stared and yelled at a lot – in a positive curious way. However, this makes me go crazy at times. I have diagnosed myself with Chinese rage, which occurs when I have had enough of the attention (never thought that could happen). I have taken to addressing people in Estonian when I get a bout of Chinese rage, or I just challenge them to a staring competition.

Another ”traditional” aspect of the people here is that the cordiality and manners I am used to are not at all observed here. I am not saying Estonians are extremely polite (compared with, say, the British, not at all), but the Xianese take it to a whole new level. There is constant spitting on the streets. They believe phlegm is bad for health and should not be swallowed. It’s not unusual to see a beautiful elegant lady stopping to clear her throat in the most grotesque manner and spitting in the road as if it were nothing. Imagine your heavy-smoking grandfather clearing his throat and you will get the idea. 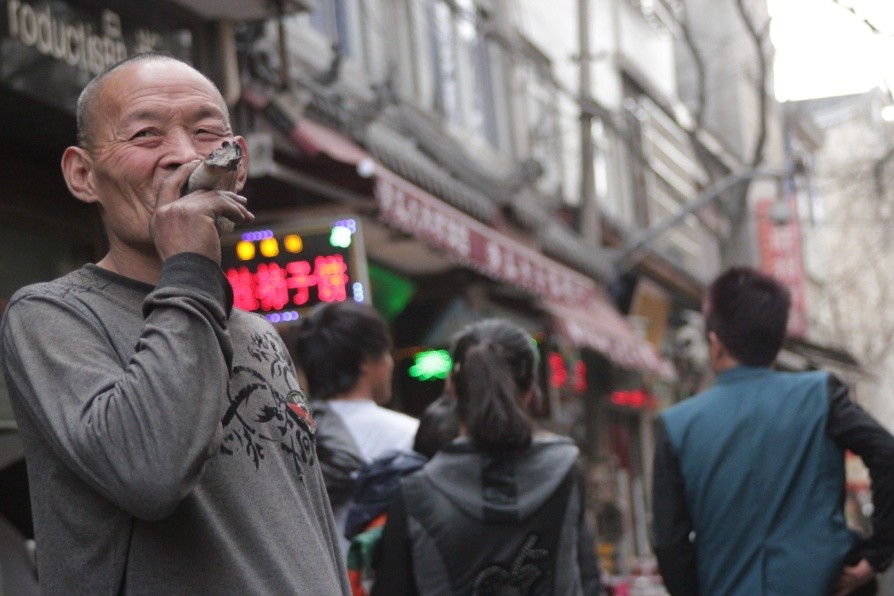 Moving on from spitting, there are other bodily functions that are satisfied in the middle of the street. Luckily, this is mostly done by children with the help of their parents and a bizarre Chinese piece of clothing – split pants. Kids here don’t wear nappies; they just have a hole at the front and back of their pants, so they can always go to the bathroom wherever they please. I have never seen so many baby butts in my life. Parents of little children often send their kids over to me to say hello to practice their English and to take photos together. I have taken photos with so many strangers recently. Someone is probably looking at a photo of me in their photo album right now.

The language school we teach at, English First, is quite a modern institution and really only represents a fraction of today’s China. The kids attend the school at weekends and in the evenings, after their normal school. These poor children never have a day off. When there is a public holiday that falls on a weekday, the kids have to go to school during the weekend to ”make up” for the holiday. 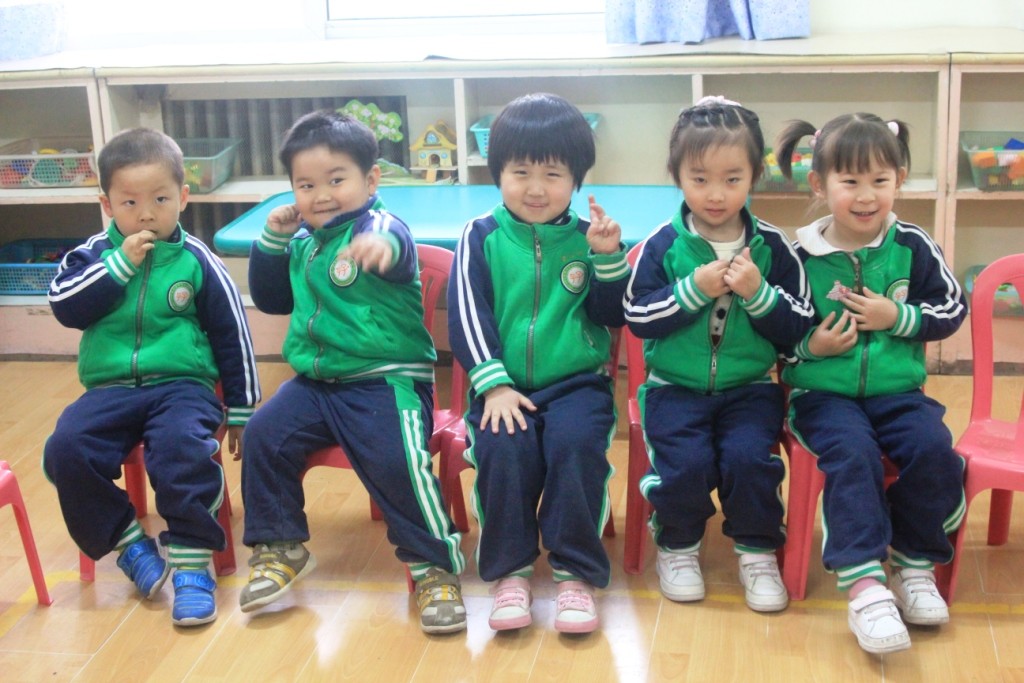 I also teach at a government school and a government kindergarten. Let me tell you about the kindergarten. The children are between 2-4 years old. Needless to say, they don’t know how to speak proper Chinese yet, let alone English.

They were absolutely terrified of me in the very first lesson. They called me a yellow haired foreigner. After a while they got over the shock of seeing a foreigner so close and now I sit with them before every lesson so they can closely explore my ”yellow” hair, the hairs on my arms, my blue eyes and my nose. The worrying part is seeing the kids all go to the bathroom together in a hole in the floor in their classroom. Some of them wash their hands, some don’t. Nobody uses toilet paper, including the teachers. There just isn’t any. While trying very hard to teach these lovely young kids some English words I have to deal with kids peeing in their pants, nosebleeds and general Kung Fu Panda attitudes some of them have – they love to practice martial arts when they get tired of learning English. As they are just at the right height now, it means I get my butt kicked a lot. 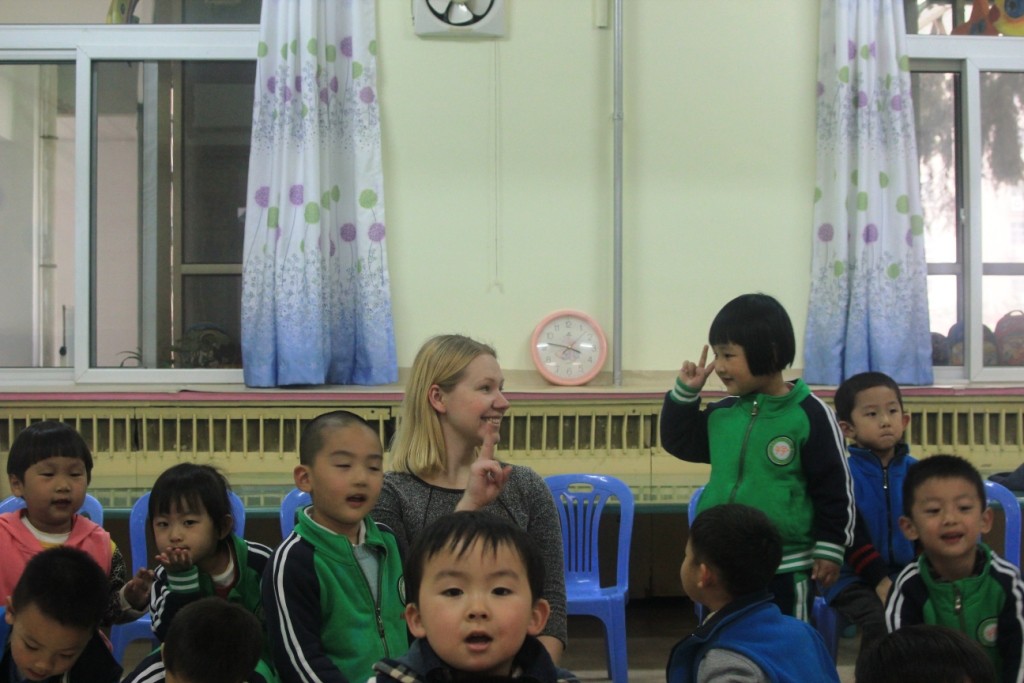 It’s quite different teaching older children. The other day we were learning how to make suggestions and solve problems. So I asked them (they’re about 14 years old) what type of problems they think there are in the world and in China. One of the girls said that China is not very free while the other students nodded to her comment. I quickly changed the subject as discussing politics is discouraged at school. There have been a few moments like these that I believe are comparable with Soviet Estonia – lack of freedom and a kindling courage to talk about it. I find that more and more of my Chinese friends are curious to find out what actually happened during the Cultural Revolution and also what the rest of the world thinks about China.

One of the Chinese staff at my school hadn’t a clue about the new premier Xi Jinping’s life other than what the local media feeds people. When I told her that he was divorced before he married the famous singer Peng Li Yuan, she was quite shocked. She quickly went on to ask me to tell her more about the premier. I use a VPN connection to access Facebook, Twitter, WordPress, uncensored Wikipedia and so on. When comparing the Wikipedia entries for Xi Jiinping with and without VPN there really is no mention of his “previous” life on the Chinese censored version. 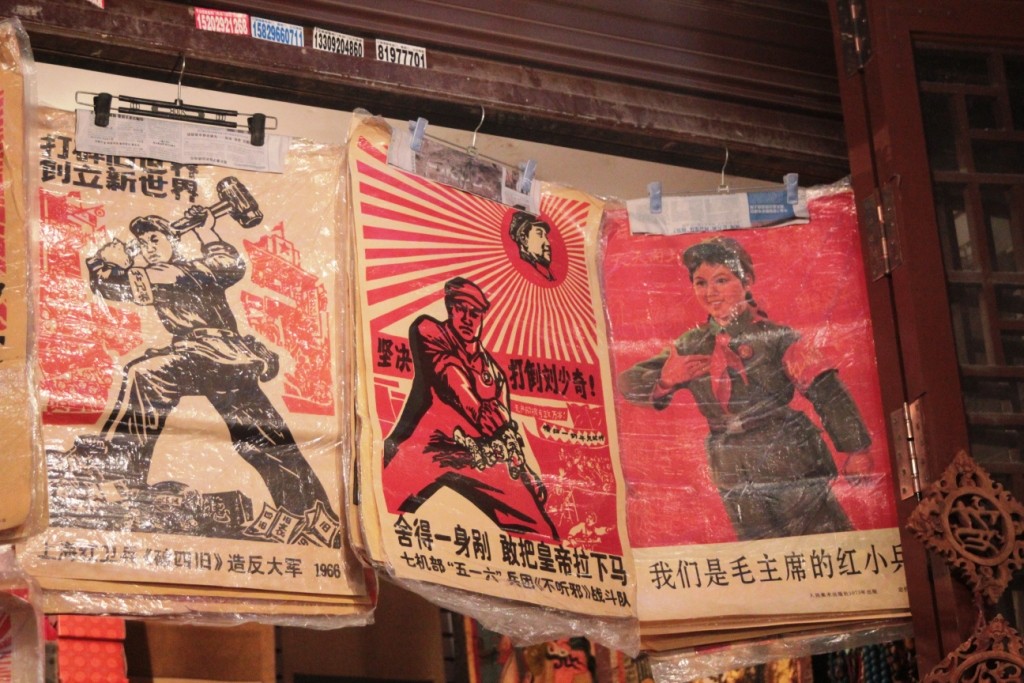 I can remember my mum telling me how they had to re-learn parts of history to get the right picture about Estonian history. The more curious Chinese youngsters do the same. They know about Tiananmen Square, Cultural Revolution and the famine. Curiously, though, every single person I have so far asked is in favour of the media censorship. Their rationale for agreeing was the following: ”If you give someone who is used to a donkey and a cart a Porsche, (s)he is going to drive it like a donkey and a cart.”

The rapid development of the China is really not good for my “Võru Estonian soul”. I feel claustrophobic at times and miss the blue sky. Even the air of London seems so clean in comparison. The pollution is so thick that the mountains surrounding Xi’an are not visible. That, combined with the sand from the desert, deems it necessary to wear a surgical mask. Coming from Võru where such a thing as pollution is not even mentioned, I find the condition of the air here appalling.

Having grown up amid lakes and forests, running around under the beautiful blue skies, I feel sorry for Chinese kids who will never feel such freedom. Little babies grow up wearing masks, it’s so normal for them that a person without a mask looks strange. Only now can I truly appreciate the childhood kids in Estonia can have. Here the children play in concrete cities, go to school every day and study in their spare time because there is so much competition. Their lives are predetermined – the parents will choose what they should study and who they should marry. Once the kids are up and running, it is their turn to look after the parents and have children of their own. They seldom get a chance to travel outside Xi’an, let alone outside China. There are many teachers in their 30s in my school who have never left Xi’an or experienced cultures other than Chinese. 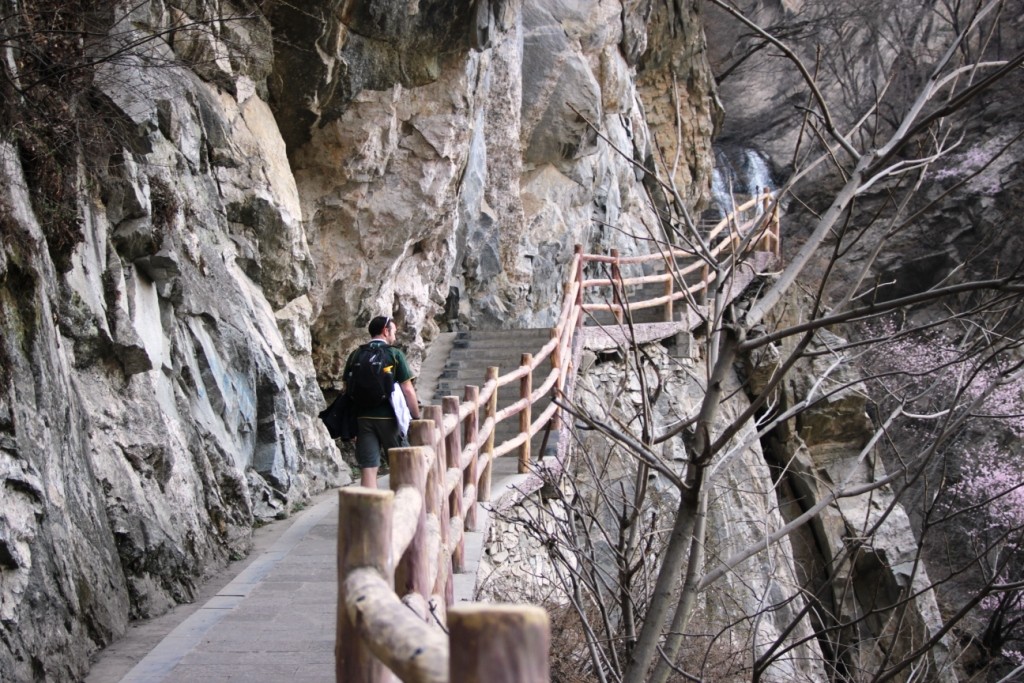 Xi’an was the starting city of the Silk Road, which means there is a large Muslim population here, whose culture is heavily influenced by the people of Central Asia. So when I miss home I can go to the Muslim quarter, buy some halva and tšeburekk and feel happy again. You can also get waffles, the ones made with those heavy iron cookers. Those are everywhere in China and they taste exactly the same, except the Chinese add sesame seeds to the mix. There are, however, no fresh dairy products available whatsoever. This, combined with a sweet tooth, is making the teeth rot in the mouths of the local kids; and it’s making me mad because I have to make porridge using UHT milk, which does not even deserve to be called milk. 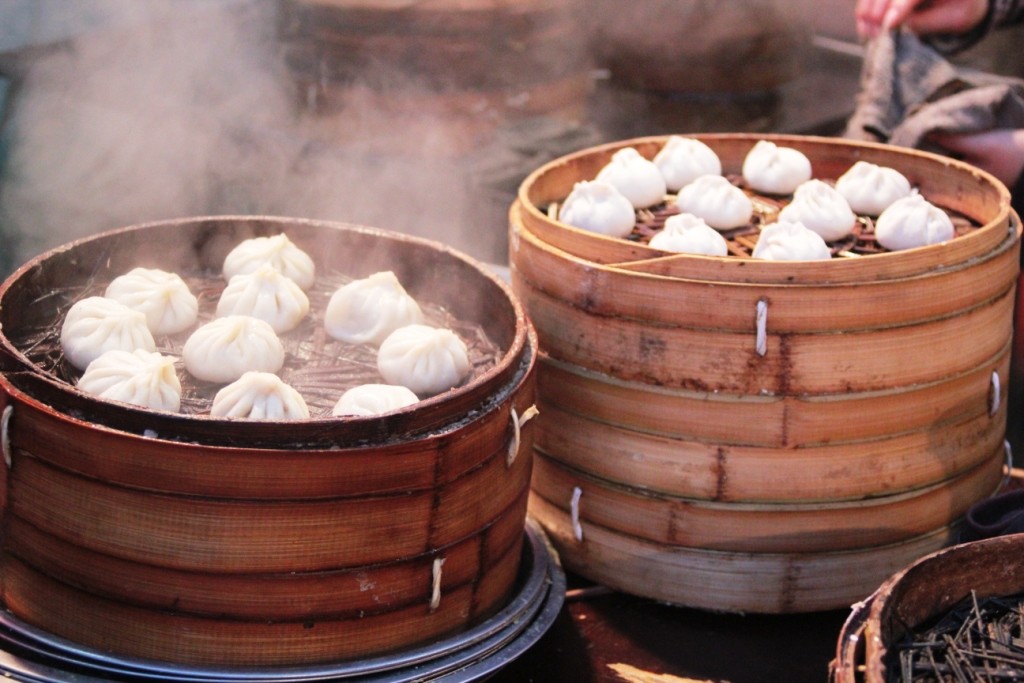 There is plenty of dill and pork in Xi’an, which makes cooking potatoes and sauce quite easy. My husband even found me some Nutella chocolate spread for my birthday, which I just eat out of the jar, because the bread here tastes very sweet and not right. I do eat Chinese food most of the time, but sometimes a taste of home is all I crave for. I demolished the two Mesikäpp (famous Estonian candy) chocolates my mum sent me within hours.

So the days go by in Xi’an. I will keep telling people about Estonia, the clean air and the space, picking mushrooms in the forest and not being worried about getting poisoned by the air. As to the week ahead – I am on a mission to find sour cream as I need to make potato salad for my birthday. Luckily the Chinese are as fond of sefiiritort (fudge cake) as us Estonians.

Katrin is currently living in Xi'an, China with her Zimbabwean husband David. Having lived, studied and worked in the public sector in the UK for 7 years, she is now taking a year-long break to learn Mandarin, after which she intends to return to Estonia. You can read all about her Chinese (and some other) adventures here: www.katrinwinter.com

10 thoughts on “A girl from Võru ends up in Xi’an, China”