The Estonian Students’ Society adopted blue, black and white as the colours of their fraternity on 4 June 1884; the date is now celebrated as Flag Day in Estonia.*

The origins of the Estonian flag lie within the national movement – the Estonian Students’ Society adopted blue, black and white as the colours of their student fraternity on 4 June 1884. In 1918, the flag officially became the Estonian national flag. The tricolour has since become one of the most important symbols in the independence, consciousness and solidarity of the Estonian people.

The birth of the Estonian tricolour is connected with the Estonian awakening period – the national flag is thus the same age as the political history of its people. The tricolour was born in the academic and national-romantic atmosphere of the University of Tartu during the last quarter of the 19th century.

It was at the founding of the “Vironia” society at the University of Tartu (now Eesti Üliõpilaste Selts, Estonian Students’ Society) on 29 September 1881, when the exact colour combination of blue-black-white first emerged. The first flag was handmade in the spring of 1884 by Paula Hermann, the wife of Dr Karl August Hermann, a honorary member of the Students’ Society. The flag was made in Tartu, in the kitchen of the Hermanns’ Veski Street house.

There are several interpretations of the national colours. According to the most popular one, blue represents the reflection of the sky in the lakes and the sea, symbolising endurance – “until the skies last”; black stands for the black greatcoat of an Estonian man or for the earth that feeds its people; white marks an aspiration towards light and purity.

Since appearances with this flag were banned in Tartu, as Estonia was then under the rule of the imperial Russia, the flag was blessed in a semi-secret church service on 4 June 1884 in Otepää. The last song of the service was “Mu isamaa, mu õnn ja rõõm” (My Native Land, My Pride and Joy, the current national anthem). 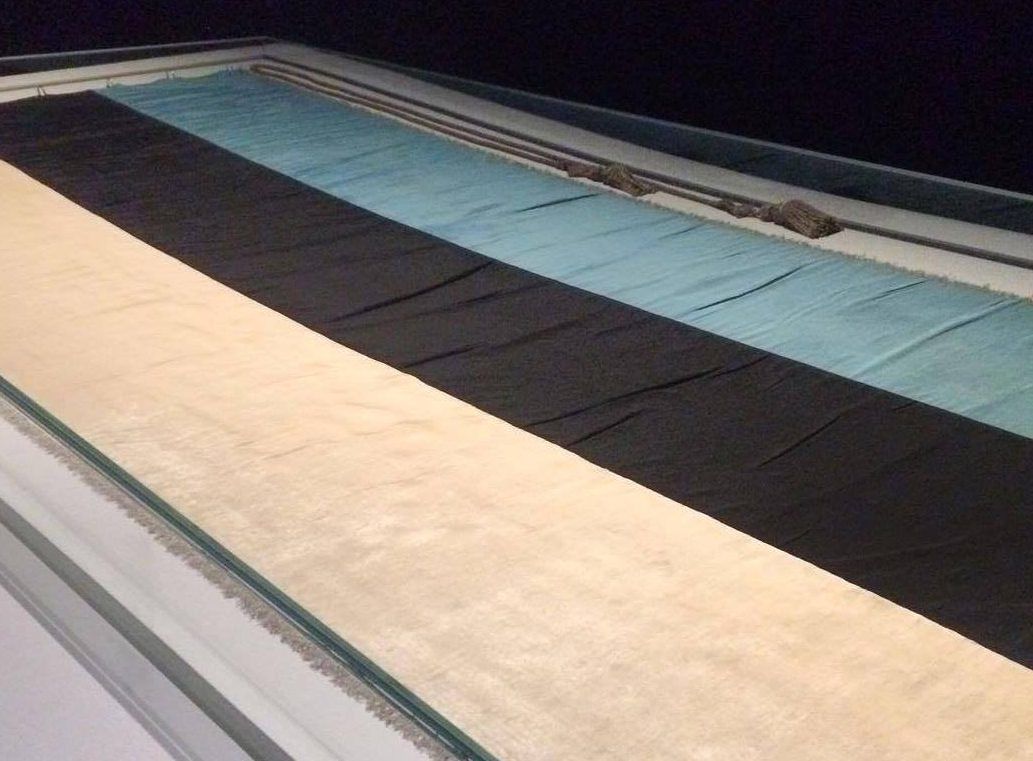 Due to the enmity of both the local Baltic German and Russian central authorities, the chances of displaying the Estonian tricolour openly were quite limited. Nevertheless, the flag became a beloved image not only to the Estonian students, but to the whole nation. The political meaning of the tricolour strengthened at the demonstrations of the 1905 Russian Revolution. On the day before the VII Song Festival in 1910, numerous houses were decorated with national flags until local authorities demanded their removal.

The blue-black-white flags of Estonian student organisations and soldier groups were waived at the large Estonian manifestation and parade demanding Estonian autonomy in Petrograd in 1917. Following this manifestation, Estonia was the only country that was granted autonomy by imperial Russia. After the new autonomy, soldiers and citizens were seen wearing tricolour badges and ribbons. 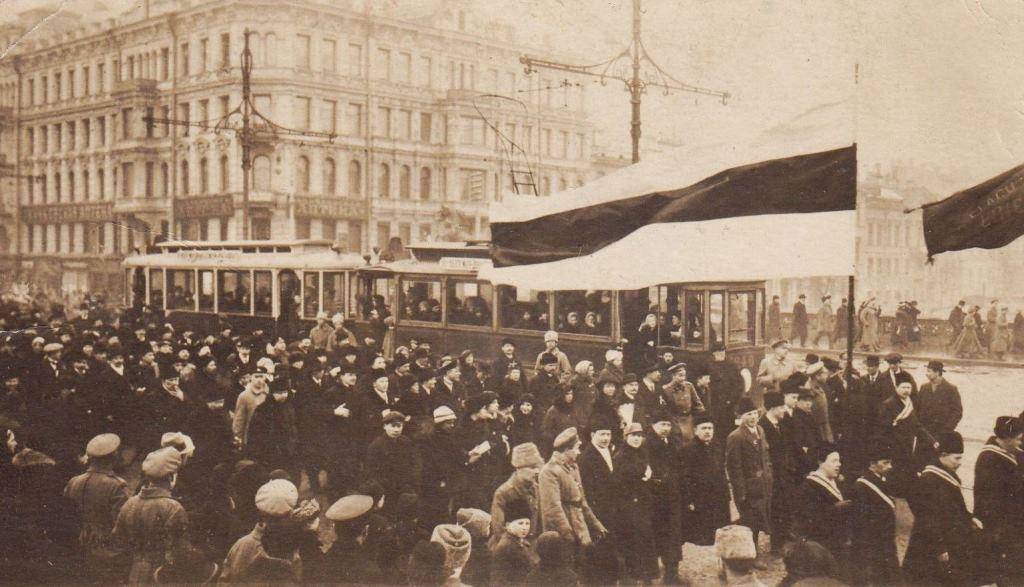 On 24 February 1918, accompanied by the blue-black-white tricolour, Estonia declared its independence. The provisional government of the Republic of Estonia declared the blue-black-white tricolour the official national flag on 21 November 1918. The flag was raised for the first time as a national symbol at the Pikk Hermann tower in Tallinn on 12 December 1918.

Following the occupation of Estonia by Soviet forces in 1940, Estonia’s national symbols were forcibly replaced by Soviet ones. The raising of the Estonian flag or even the possession of the tricolour was considered a criminal offence for which some people were arrested or sent to Soviet prison camps, where they ultimately died.

The colours, however, lived on in the free world. In early autumn 1944, tens of thousands of Estonians fled their country in order to escape persecution and deportation by advancing Soviet forces, and established large exile communities in Sweden, Canada, the US and Australia. The expatriates maintained the tricolour and other national symbols and promoted their use at every opportunity. The 100th anniversary of the Estonian flag was celebrated in exile.

Following the Soviet Perestroika, a strong Estonian national awakening took place, culminating in 1987 and 1988 with massive open-air meetings and concerts where the national tricolour was openly waved again. The Singing Revolution of the late 1980s and the weakening hold of the Soviet power over Estonia paved the way for the raising of the blue-black-white Estonian flag to the top of the Pikk Hermann tower on 24 February 1989, ahead of Estonia officially regaining its independence from the Soviet Union in August 1991. 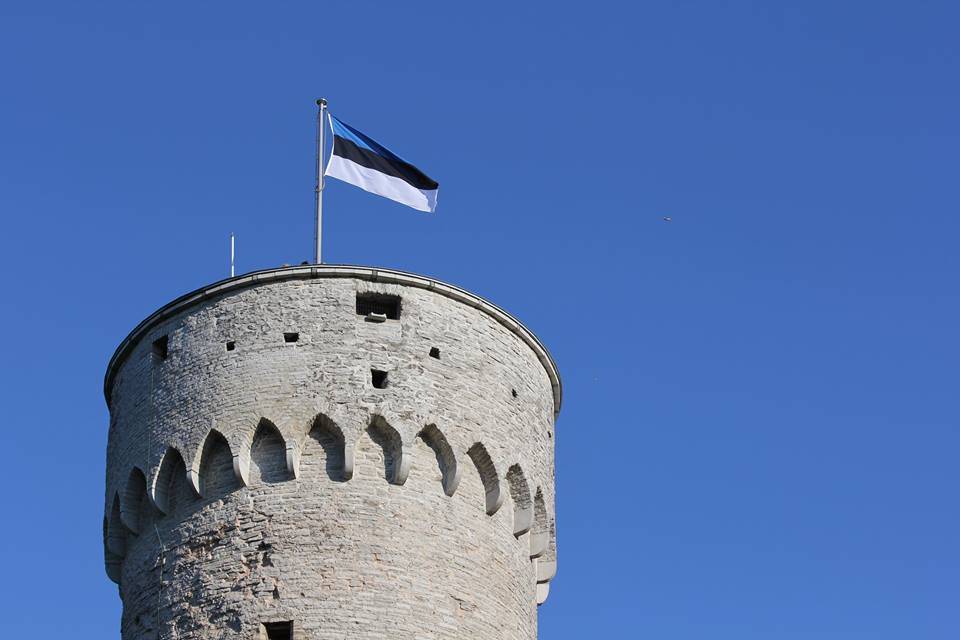 Sources: Estonica.org and Estonian World. Please note that this article was originally published on 4 June 2015.