Ever wish you could be a fly on the sauna wall? Well, thanks to a new Estonian reality television series, now you can.*

The show will film willing sauna revellers as they relax after a long week, network with business partners and cleanse down to their inner souls. The producers promise lots of interesting dialogue, cheeky camera angles and steamy scenes (literal steam). Unscripted and uncensored, the show is garnering early rave reviews, including the following from a British television critic, Otto Tuunin:

“After years of reality television disasters, ‘Sauna Secrets’ revitalises the industry. The show includes all the bare necessities of compelling TV – fascinating dialogue, fresh characters and a heated drama. This is more than a voyeuristic window in the sauna wall. Rather, one is transported to the top bench in a rustic sauna and the feeling of being surrounded by dry heat is palpable. The first time I watched it, so convinced I was part of the action, I started sweating from every pore and I accidentally and embarrassingly threw a bucket of water on the end table next to my couch. Instead of a sizzling burst of steam from the sauna rocks, I need a new cell phone.” 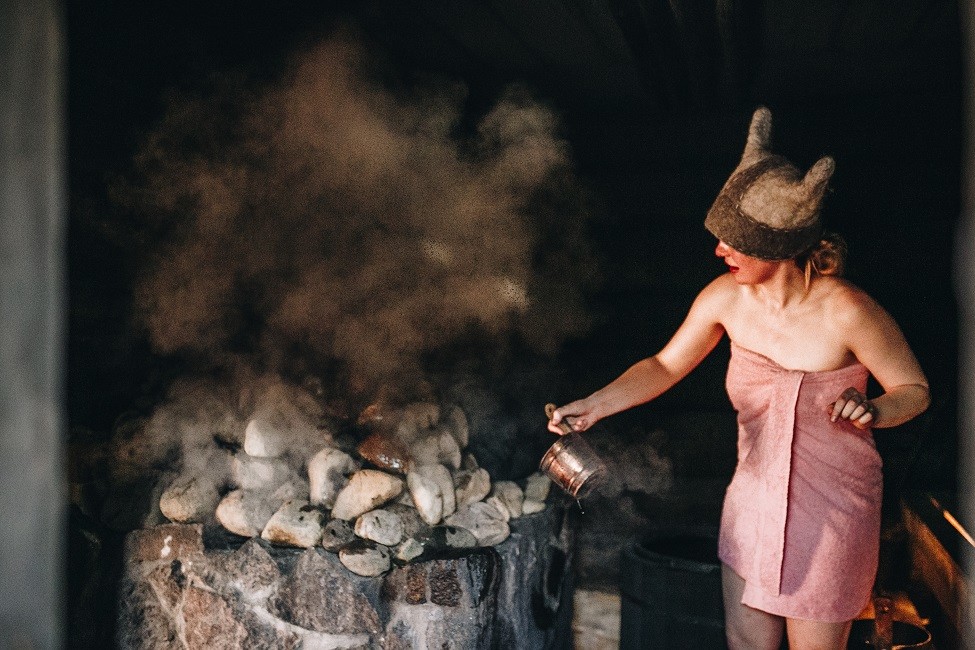 Rumal Productions is boasting of several reality television innovations. “Sauna Secrets” will feature never-before seen camera angles providing a front row seat, including a birch viht-cam (birch whisk cam), a cedar bench cam and a robotic underwater cam in the lake where participants cool off. Other innovations include movable subtitles, in case the graphics interfere with one’s viewing pleasure. And, notably, an associated phone app allows one to control a central camera.

Pushing the limits of reality television, which the producers claim has gone stale, is a goal. Estonian World spoke with Aino Aur, the CEO of Rumal Productions. “Singing contests, scripted dating theatre, kitchen melodramas… enough already. It’s time the world learns first-hand about the Estonian love affair with the sauna. I mean, seriously, is there a more useless way to spend an hour than watching the Kardashians showcase the collective IQ of a bucket of mop water?”

Four episodes are ready to air. Translated into English, season 1 currently includes the episodes entitled Full Moon, The Most Painful Splinter and Butt, Seriously Folks. If all goes well and the ratings will be great, the producers hope to keep filming.

Estonian World was provided an exclusive preview of the first episode. The setting is a quaint lakeside sauna in the Estonian island of Saaremaa, it’s night time. The scene opens at the dock. From the opening sequence, featuring four full moons on the dock backlit by an even fuller moon in the sky, we were hooked.

Clearly friends, the four revellers make their way into the sauna and an orange glow cuts the dark night-time air. They laugh and they swig from a glass bottle with some sort of clear liquid (water? lemon-lime soda? – the viewer is left to wonder). They discuss the day’s events in amusing detail. We learn that one is a cook, one is an accountant, one is a professor and the last is a freak-show contortionist. We learn about their inner secrets – a work love triangle, a financial scandal, a human pretzel trick gone wrong. As the episode closes, clearly a cliffhanger, we are left wanting more.

(Warning, spoiler alert: it wasn’t water, it was vodka).

Sauna Secrets premiers on 1 April on BBC 2, but will also be available online – check your favourite streaming service for availability. Be sure to tune in, you’ll be glad you did. No fooling.

Cover: One of the saunas featured on the new reality show (image by Tõnu Runnel). * Please note that this is April Fools’ Day article.