However, I do not teach the word as a synonym for Beelzebub or Lucifer. “Kurat” is so much more. It has transcended theology to take a special place in the Estonian American vocabulary; essentially, it has morphed into a rather fun and handy curse word.  Go ahead and give it a test spin – kurat.

There are ascending tiers for the base word “kurat”. To visualise this hierarchy in print, it can be capitalised (Kurat) to add a heightened level of severity. Include an exclamation point (Kurat!) and things are getting even more serious. All caps plus a user-defined amount of exclamation points (KURAT!!!!) indicates the penultimate and a situation most dire. Watch out.

In everyday ordinary speech, verbally releasing those two syllables is most therapeutic. With speech, the print versions described above correlate with the decibel level of the speaker’s voice and the redness of the speaker’s face. For example, maybe one has misspelled a word while typing (Kurat). Or, stubbed a toe (Kurat!). Or, was fired from a job (KURAT!!!!). Add a simultaneous fist pounding on the table, and you have a very serious “kurat” indeed (confronted with this situation, observers should stand at least two meters back from the cursing Estonian).

Grammatically, there are a number of great uses for kurat beyond a standalone curse word. In the genitive case, we could alter “kurat” slightly if we need to modify another noun in a troubling situation:

The kuradi bartender poured me the cheap stuff!

I’m kuradi sick and tired of you leaving the toilet seat up!

In the partitive case, “kurat” can help when confronted with an awkward situation. For example, you discover your girlfriend and your best friend tangled-up on the bedspread:

What the kuradit is going on here?

But really, all you need to remember is that “kurat” can be used equally well on its own as described earlier, or as a perfect exclamation to intensify a longer statement.

Get, kurat, out of here. I’ve had enough of you, kurat.

If this is all new to you, by now, you are well on your way towards becoming an honorary Estonian. 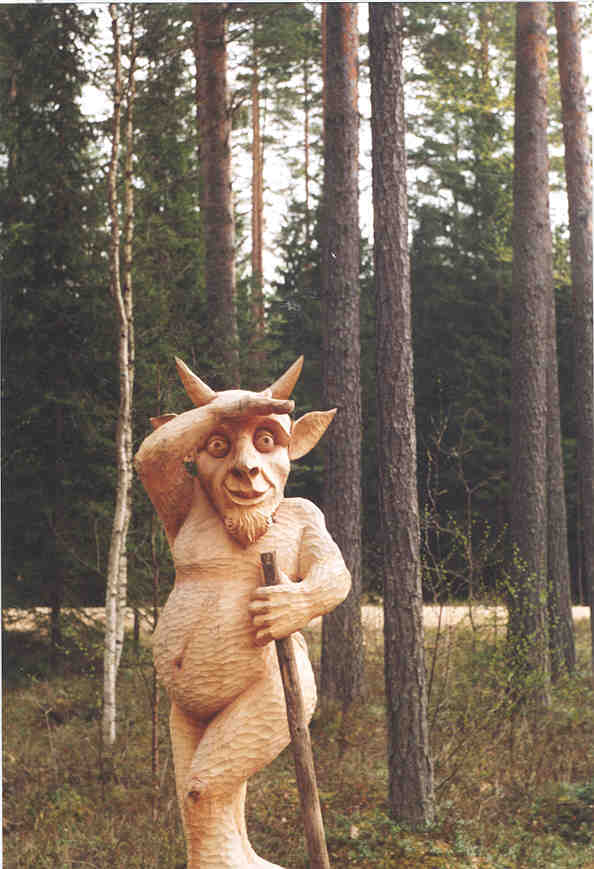 Looking back, I’m wondering why this valuable linguistic lesson wasn’t taught when I was enrolled in Estonian language classes as a child in the United States. Sometimes, they really skip the kuradi important stuff in school.

For me, my first exposure to the word was within earshot of my parents’ more animated friends during my childhood. It may have been at the Estonian clubhouse or maybe in our home – I can’t really remember. And at that initial encounter of course, I didn’t know the exact meaning. But from the context I was drawn to the word and knew it was something special. It somehow emphasised an otherwise mundane statement and demanded my attention.

This childhood took place in the town of Lakewood, New Jersey, which boasts a rather large ethnic Estonian population (relatively speaking). For many, many years there was a yellow street sign along North Lake Drive defaced in green spray paint with the word “kurat”. I’ve heard differing theories as to the identity of the perpetrator. Heck, he or she might be reading this piece right now. Regardless of the comedian’s identity though, it’s been called a victimless crime. Maybe. Most driving by probably had no idea what the word meant. But me, I know I would giggle at each passing.

Although the direct curse word translation is closer to “damn”, native English speakers may be sensing a corollary here to a good old English curse word beginning with the letter f (and I’m not talking about fudge). Well, you would be correct. “Kurat” and the f-word are essentially connotative synonyms. They are translative siblings. So in English-speaking situations, when in the presence of little children or prim and proper guests, swap in “kurat” as necessary to avoid the inevitable scorn.

Whether stuck in traffic or fighting with your boss, the next time you encounter a situation that requires a well-placed curse word, yell “kurat!” at the top of your voice. I promise that you’ll feel much better. Non-Estonians within earshot may think you a bit odd and shoot you a puzzled look, but that just adds to the fun.

Kurat, sorry, dear readers, I have to run… I think someone’s knocking on the kuradi door…

If you’d like to take a short quiz testing your comprehension of the above language lesson, here are five simple questions – should take you only a few minutes.  If you get them all correct, congratulations, you are well versed in the American Estonian dialect.  If you get any wrong, please start at the top again.

B.  An Australian rodent

2.  What Estonian word is the proper response to a situation where you just accidentally hit your thumb with a hammer?

3.  Kurat is to an Estonian language speaker in America as ____ is to a fish

4.  Is it okay to use the word kurat in the presence of one’s grandmother?

B.  Only in a hushed whisper

C.  If she is Estonian, by all means, fire away

5.  In conversation, the frequency of the word kurat is ______ proportional to the amount of vodka consumed.

A.  What, the kurat, is a proportion?

Answer key:  “C” is the proper response to all five kuradi questions.

The cover image is illustrative (courtesy of VisitEstonia.)