In recent years, thousands of people from all corners of the world have chosen Estonia as their destination for work and study. Increasingly, more of them settle in the country. In addition, Estonia has agreed to accommodate hundreds of war refugees – first seven people arrived to the country in March. How is the adaptation and integration of the new immigrants supported? Estonian World investigated.

The classroom at the Tallinn International School was light and bright, the students sat around in a semi-circle in front of the projector eagerly taking notes and asking questions. The scene was an ordinary one, except the day was a Sunday and the 18 people sitting on the wooden chairs probably made up one of the most ethnically diverse places in the country at the time.

The students were from almost every continent on earth and are some of the first students to sign up to Estonia’s new welcoming programme that helps new migrants integrate into society.

Since the start of the programme in August 2015, almost 1000 foreign nationals living in Estonia have signed up. It consists of several modules such as family life, work and entrepreneurship as well as language classes. They are available to people who have been in the country for less than five years.

The Estonian interior ministry is responsible for the implementation of the welcoming programme. The classes are being run by various service providers and new immigrants are enrolled into the programme by the police and border guard board, when they are granted a residence permit (third country nationals) or have acquired or are granted the right of residence (EU citizens and their family members). The money has been provided by the European Union funds and Estonia’s state budget.

On the day Estonian World visited, there were students from Uruguay, Sri Lanka, Egypt, Moldova, Thailand, Portugal, Ghana, Nigeria, New Zealand and the United States attending the eight-hour module on Estonian family life. Class co-ordinator Martin Lään was explaining a page titled “Kindergarten”, and taking questions from the students on prices, dual citizenship, language tuition and the differences between private and municipal education. He also explained benefits families living below the poverty line could claim. 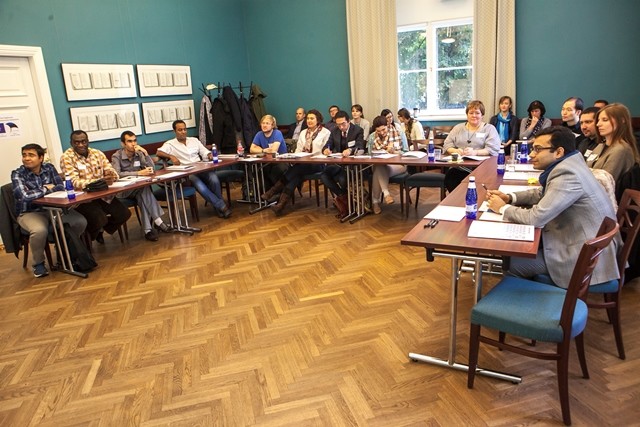 During the break the group clustered around a coffee table in the hall sharing jokes, while two young boys, brothers from Sri Lanka, kicked a football between themselves. Several of the new arrivals spoke to Estonian World about how they had got involved in the programme and how it was helping them fit in.

New Zealander Jamie Harbord was on his third visit to the country after meeting his Estonian-born wife while she was studying in Wellington. The pair now has a baby and they’re currently splitting their time between New Zealand and Estonia.

The 40-year-old who lives in Rapla is a researcher, and has been there since July 2015. He said the classes had been very useful and informative: “I wouldn’t say I have had problems [integrating], but the programme is a very positive initiative and a good opportunity to get first hand information from a reliable source. It makes you feel welcome and provides confidence for integration.”

Speaking after the class by email, he added that he wished some more information had been provided about “specific” health care possibilities for children, but was otherwise happy with the session. 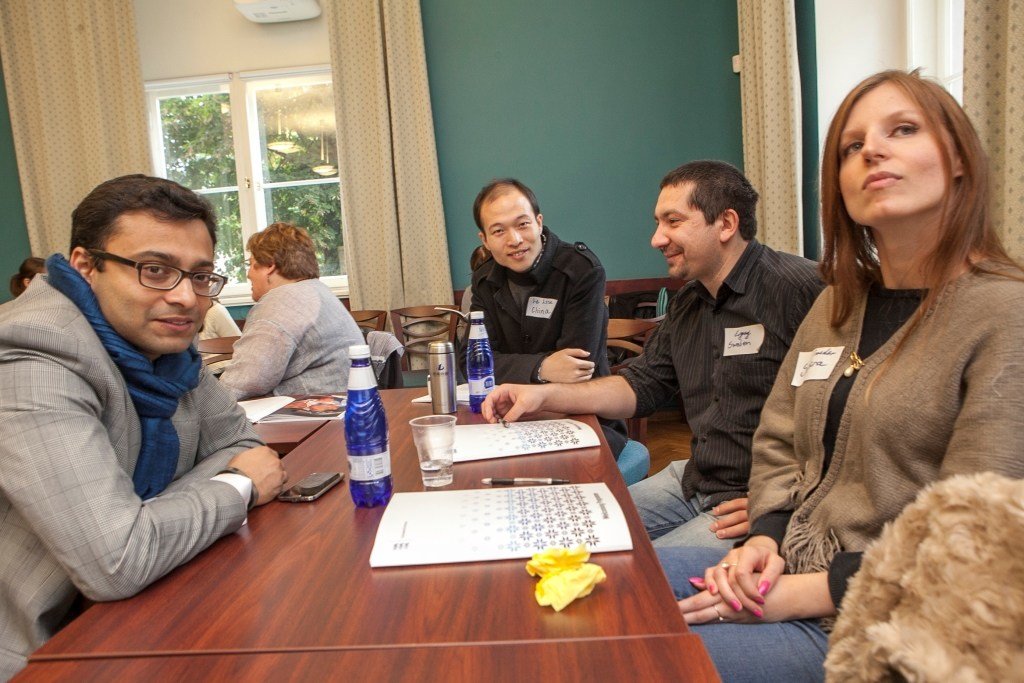 Another participant, Fawzy El Sayed from Egypt, has been living in Estonia for three months with his wife who is from Tallinn. Previously a tour guide in his native country, he moved to Europe because it gives him “better opportunities”.

He has been attending the course for three weeks and is trying to learn Estonian. He also speaks Russian, Arabic and Italian. The 25-year-old said: “I like Estonia very much and hope to stay here a long time. The course is helping me settle in and everyone has been friendly.”

The new programme is very much needed, said Birgit Lüüs, the deputy head of the citizenship and migration policy department at the interior ministry. Last year, Estonia issued almost 5,000 temporary residence permits to third country nationals – and the number is going up each year.

When they arrive, people are unsure of what to do or where to go, so the course has been developed to guide them.

“We explain the Estonian culture to them – like why we don’t smile very much,” Lüüs joked. “The most popular classes so far have been the basic level of Estonian language training as well working and entrepreneurship modules.” 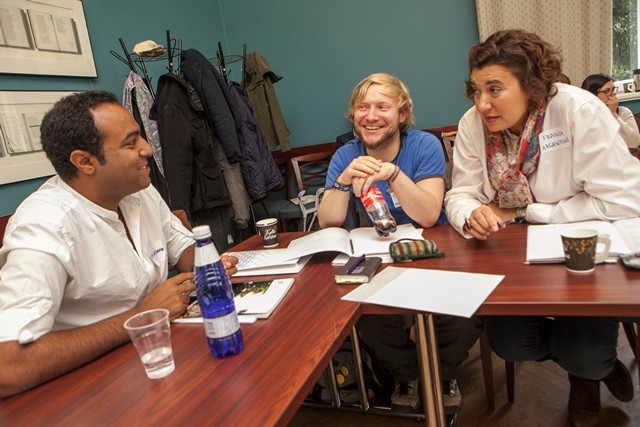 Most of the people who have taken part, so far, have come to study or work in Estonia, but refugees will also undertake a similar course with a specific module designed for beneficiaries of international protection when they arrive in 2016 and 2017.

The last person Estonian World spoke to at the session was Oshani Kleevasinghe and her two young sons from Sri Lanka. The 33-year-old moved to Tallinn in summer 2015 with her husband. They were referred to the sessions by their consultant.

As her sons played football in the corridor, she said most people had been very welcoming, but that accessing information was “difficult” as she could not speak Estonian. “It’s a challenge,” she said. “Finding a job is a problem; people don’t just want an English speaker.”

Course leader Martin Lään said he and his company won the bid to provide the welcoming classes this year for the next two years. In the past he has taught similar classes to help people relocate and taken part in round table discussions about legislation changes on the same subject. 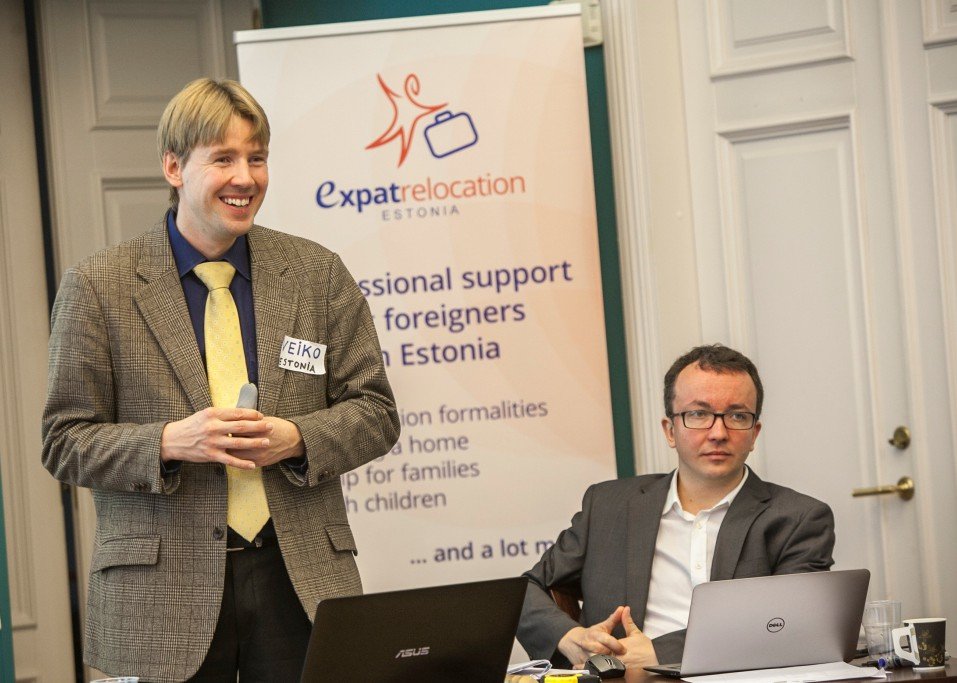 The four courses he helps teach will be held each year, one every quarter. “So far everything seems to be going quite well,” he said. “This is the first time we have run the course so we are learning ourselves as well as the participants. But we are getting regular feedback.

He said he expected a “steady flow” of around 2,000 to take part in the course over the term of his tender.

“People sacrificing their weekends to come along, and most are taking part in more than one module,” he said. “I would say that is quite successful.”

In late March, Estonia received the first war refugees from Greece, relocated on the basis of the European Agenda on Migration: one five-member Iraqi family, one man from Syria, and one man from Yemen. The war refugees, who will reside in Tallinn and Tartu, passed through background checks, and interviews with them were conducted in Greece, which included, among others, an introduction to Estonia and local customs.

The war refugees, who have received international protection, will also attend the welcoming programme, but it includes a separate, specifically tailored training module. The goal is to let the participants get a good understanding of the processes of the Estonian society and quickly achieve contact with the local community. Studying the Estonian language has an important role in the process of settling in, and these arrivals will start to learn it at the first opportunity. The language course is free for those under protection, and the goal for them is to obtain at least A2 level. 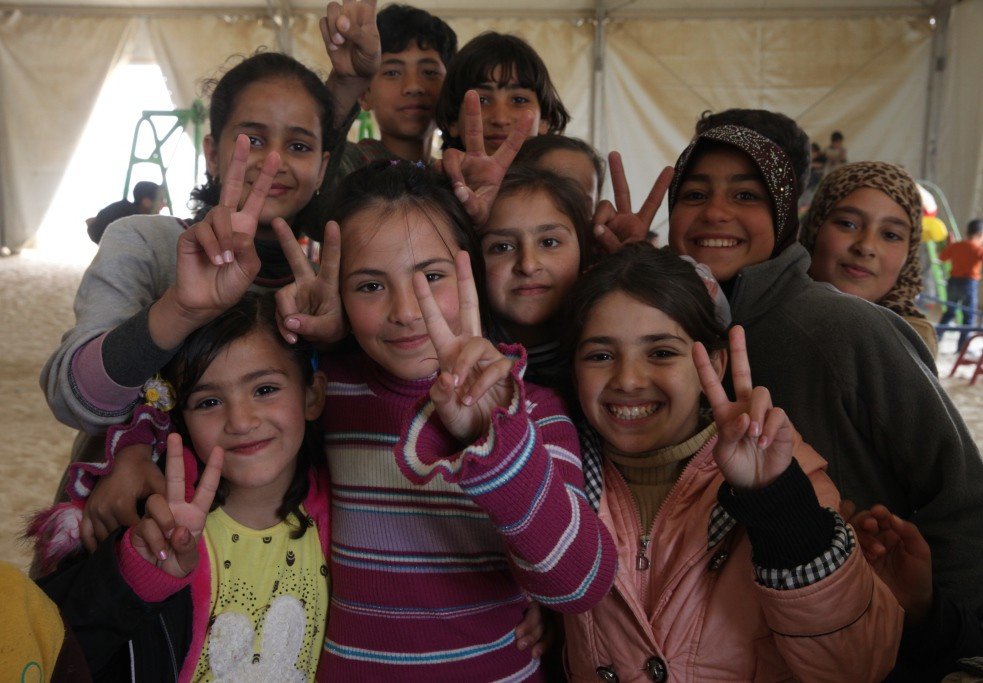 Contrary to the far-right and populist hysteria, the war refugees will not have everything served on a silver platter. “Just like all other Estonian people, they will need to register a place of residence, find employment possibilities for themselves and school places for their children, open a bank account and register with a family physician. But they will be assisted and advised by support persons,” a representative of the Estonian ministry of social affairs said.

“Do not forget that these people escaped a country where war is happening, and that they had to overcome a lot of hardship to reach Estonia,” emphasised Raivo Küüt, a civil servant responsible for migration at the interior ministry. “Their hope is to find a safe home here. It is important to let them adapt peacefully and to treat them like we would treat any of our other neighbours, colleagues and acquaintances”.

Silver Tambur contributed to this story. Cover: Estonia has in recent years attracted more people from around the world (courtesy of Work in Estonia).

3 thoughts on “New to Estonia – how will the recent immigrants integrate?”