Santa is Santa no matter the nationality, right? In the case of the Estonian Santa Claus, the answer is yes and no.*

Santa Claus comes in many different forms. There is the seasoned mechanical engineer, unceremoniously displaced from a lucrative career by a recent college graduate, working part-time at the shopping mall in December. Clad in red velvet and white trim, he poses as Santa to make ends meet while children present their material wishes on his lap. There is the white-bearded heavy-set guy that works at the local bar, who is surely the real Santa’s doppelganger. There is the Hollywood version of Santa, who fills our screens with a giant belly, rosy cheeks and hearty ho-ho-hos.

Then, there is the Estonian Santa Claus

Jõuluvana, as he is known in the native tongue, roughly translates to old (vana) Christmas (jõulud). However, astute linguists will note the name Christ does not appear in the Estonian word for Christmas. That’s because the Estonian word, jõulud, is actually based on the ancient word yule or jul – as it is in many Scandinavian countries. Call it a hint of a pagan past hidden in a modern pious holiday reincarnation. So, Old Yule is a more literal translation for jõuluvana.

Santas, no matter their ethnicity, have many things in common. They are old men, often with bulging waistlines. They commute to work on a flying reindeer powered sleigh. Their wardrobe could use some variety. In a service to the community, Santas hire vertically challenged individuals with deformed ears to work in the shop.

Now, you ask, how does the Estonian Santa Claus differ from all the rest? For one, he does not deliver his bounty of Chinese manufactured trinkets and playthings in the middle of the night while the kids are sleeping – in anticipation of Christmas morning – as he does in the United States and elsewhere. No, as the tradition goes, he actually knocks on the front door more like a Chinese food delivery man. For in the Estonian Christmas, gifts are opened Christmas Eve. But he’s not looking for euros like a delivery man would. Rather, he expects song and dance in return for the perfectly wrapped boxes. Jõuluvana dangles presents, and the recipients make fools of themselves. Everybody wins.

But, although we are beginning to distinguish the Estonian Santa Claus from the pack, the rather comical Christmas Eve delivery is not entirely unique to Estonians. Many Scandinavians practice the same custom. So, if that’s not the unique identifier of jõuluvana, what is?

Jõuluvana speaks in a Finno-Ugric tongue

Certainly, language is key. Jõuluvana speaks in a Finno-Ugric tongue, familiar only to a small percentage of Santa believers. In the dialect, ho-ho-ho may sounds a bit more like hoh-hoh-hoh. Gifts? That’s so Indo-European. No, jõuluvana delivers kingitused. Often, on this night the language might be a bit jollier and excited too, mainly in response to a few nips from a bottle of spirits – it is Christmas Eve after all.

In keeping with Estonian character traits, jõuluvana enjoys the sauna. Whether or not he wears the red suit while whipping himself with birch branches, only Mrs Claus knows. While away from the North Pole, he checks in with the elves using Skype. He e-votes for parliament and files his taxes online. And please don’t leave him cookies and milk – he prefers Saku beer and marinated herring on black rye bread (for extra points, sprinkle some dill).

But the Estonian Santa Claus is based on personal experiences too. My childhood memories of Santa during the Christmas pageant at the Estonian School involve jolly old men that strangely looked and sounded like some of my parent’s friends and who curiously were not in the audience at the same time. Usually, these same individuals would reappear after the Christmas play… Coincidence? I don’t know. But I know jõuluvana never missed a Christmas at my house when I was growing up, and for that I thank my parents; er, I mean Old Yule. 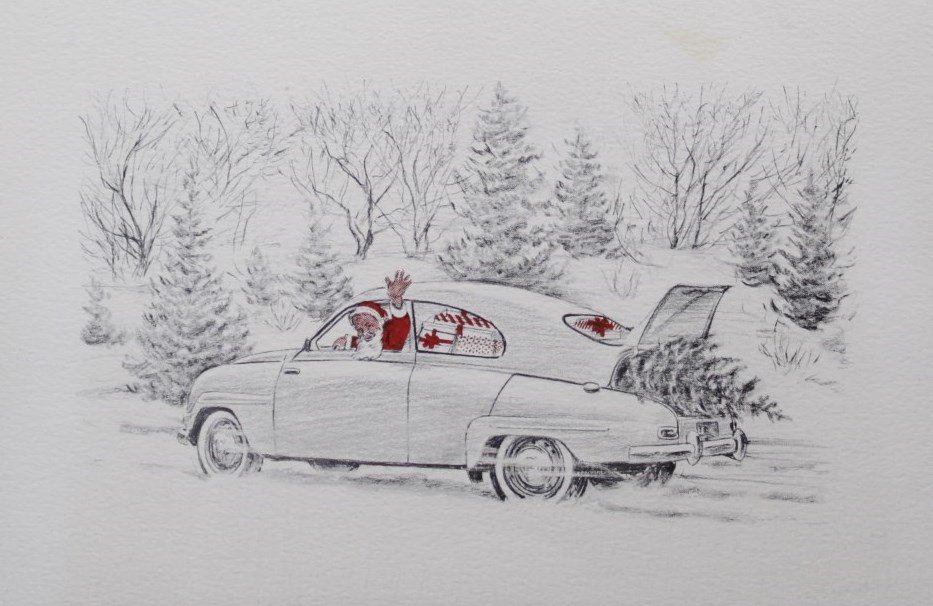 Cover: A Santa Claus meeting visitors at the Tallinn Christmas market in 2019. The image is illustrative. * Please note that this article was originally published on 23 December 2014.