There are some expats who have been living and working in Estonia for a long time – and seen the country’s transition through turbulent times to the more recent developments in joining the club of stable and relatively prosperous states.

Estonia, a tech-savvy and ever-globalising country, has lately been busy developing many initiatives to help and encourage foreign talent to relocate in the country. “Work in Estonia”, launched in 2015 by Enterprise Estonia, is one of those ambitious welcoming programmes that attempts to attract overseas professionals.

But there are some expats who have been living and working in Estonia for a long time already – and seen the country’s transition through turbulent times to the more recent developments in joining the club of stable and relatively prosperous states.

One of these is a programmer, Oliver Wihler, originally from Switzerland, who works as a coordinator of development teams at the Tallinn-based IT development branch of Kuehne + Nagel, the international logistics giant that established an IT Centre of Excellence in Estonia in 2013.

Wihler first got to know Estonia purely by coincidence via a friend over 15 years ago and soon afterwards found himself living and working in the country.

“I have to be honest – I didn’t know anything about the country beforehand because, when I went to school, Estonia was not even on the map. Of course, Estonia was in the headlines when it regained independence in 1991, but you sort of forgot that afterwards,” he recalls.

By the time Wihler visited Estonia, it was implementing some rapid economic reforms, its IT-tiger had started to roar, and the country was heading towards EU membership.

“When I first set foot here, a lot was already being transformed, but the contrast with Western Europe was still massive. Yet you could see that things were moving fast – there was a lot of change in the air and this was all very exciting, compared with Switzerland, which is a great country, but was very static,” he recalls, bringing to mind the dynamic atmosphere that first attracted him to come and try his luck in Estonia.

“There was a lot of change in the air and this was all very exciting, compared with Switzerland.”

What really sealed the deal for him, however, was high-speed Internet.

“I worked in London at the time, but you could only get dial-up internet, which was also expensive over there, whereas in Estonia, I could get broadband piped into my apartment – and at a very affordable rate,” Wihler reminisces.

He concedes that at the beginning, it was a big change of environment – from the hustle and bustle of London, with its active social scene – to the much more reserved Tallinn. But Wihler actually enjoyed that, too.

“There was so much noise in London – going out with colleagues at lunch, having a beer in the evening – there is a lot socialising. Conversely in Estonia, if you went out 15 years ago, there would usually be almost no one in the pub and there weren’t so many good restaurants back then either. Of course, these days, things have changed and there are many great places in Tallinn, and they are busier, too,” Wihler says.

His career in Estonia started with working for a small software company, which he helped build up. Wihler then set up his own IT firm that provided consultancy services, mainly for Finnish firms. The business grew fast, employing over 30 people in just two years, and it continued to do quite well for several years after that.  However, as is often the case, problems came along, which eventually resulted in Wihler switching elsewhere, including a stint at Skype just before it was sold to Microsoft.

“For me it was great – I got experience in people management, although I lost touch a little bit with the technological side of things,” he says now.

A few years ago, he landed his current position at Kuehne + Nagel, where he has been very satisfied with his career. 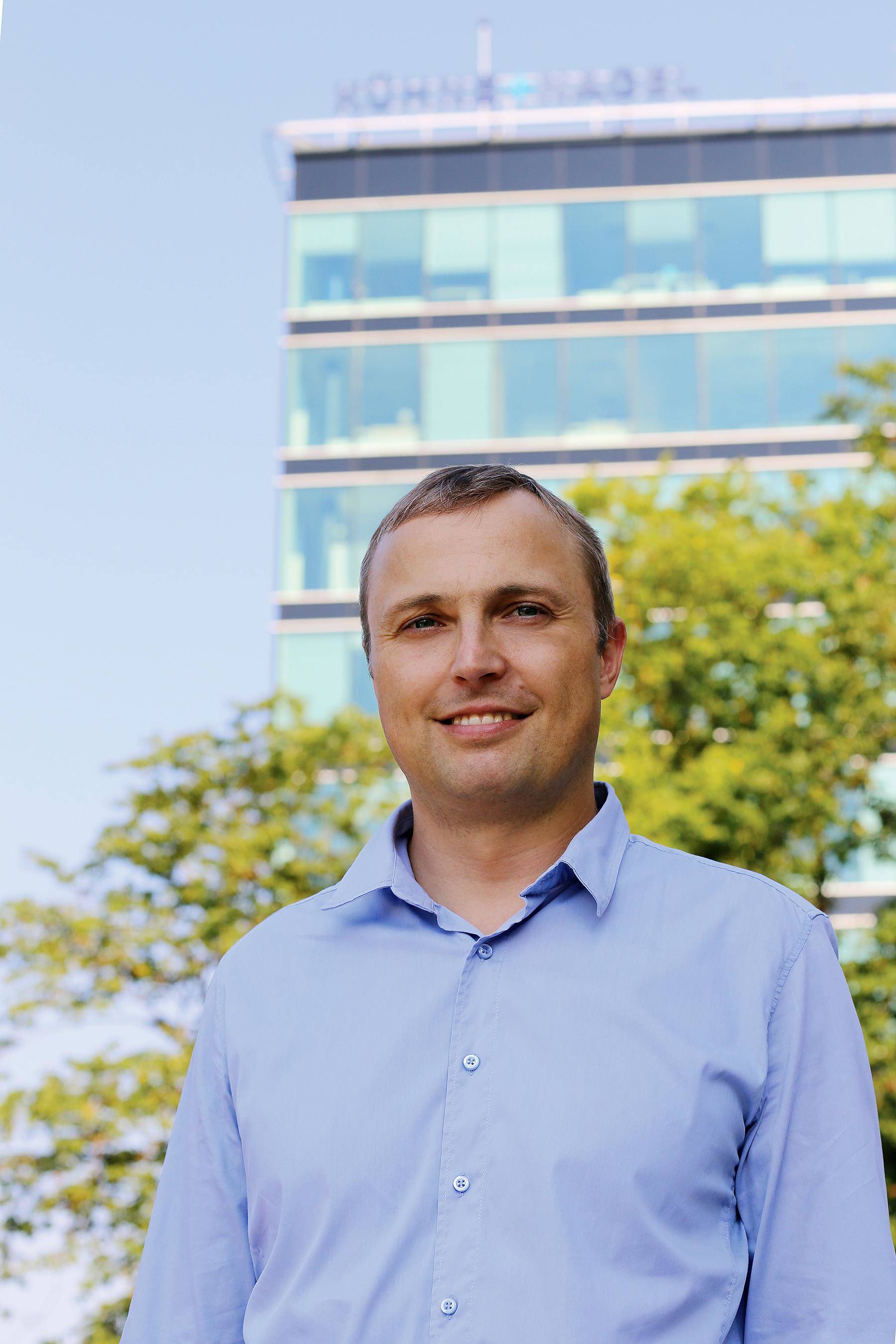 This Swiss-based company with German roots accounts for roughly ten per cent of the world’s freight forwarding. Kuehne + Nagel had operated logistics side of its business in the country before, but in 2013, while looking for ways to boost the capacity of its existing Hamburg IT centre, decided to set up a department in Tallinn, responsible for global development. The company cited cultural fit, local talent and the high level of IT penetration as the reasons that favoured Estonia over other countries in the region.

Wihler says the company is super-happy in Tallinn – and so is he: “It is very good to work for Kuehne + Nagel – it is a very professional environment. And the Estonian work ethic is very strong – people are curious and really want to know why we are doing something. As with everything here, the general rule is that people are very positive and really contribute actively to creating the software – the culture leans towards thinking, and this is what the company expected,” Wihler notes.

“Here, the culture leans towards thinking, and this is what the company expected.”

While he concedes that the work pace in Estonia is a little bit slower than in London, for example, this doesn’t somehow mean that people are less productive: “Perhaps because the environment is right, there aren’t many distractions which would slow someone down in a place with faster pace,” he comments.

When you speak Estonian, you are Estonian

In the meantime, the sporty and energetic Wihler integrated well into the Estonian society.

“Someone once told me that when you speak Estonian, you are Estonian – although I think that it is a bit harder than that. It does take time until people take you as their own. There are some Estonians who despise everything foreign. For example, I once got a call where an Estonian had a go at me for not speaking Estonian over the phone. He seemed sincerely upset, so it affected me a little bit,” Wihler, who now speaks almost perfect Estonian, admits. But he emphasises that people are generally very welcoming in Estonia.

“There are some Estonians who despise everything foreign.”

Wihler cites many reasons why he still is in Estonia, after all these years, and despite the fact that the sometimes unpredictable buzz of the early noughties that first attracted him, has been gradually been replaced by a more stable environment, just as in most other European countries.

“I have a bit of a nostalgic feeling about the Estonia at the peak of the change, but at the same time, it is great that the country has moved forward so much. Estonia needs to be proud of its success story,” he says.

Wihler expresses hope that Estonia stays flexible: “There’s the danger that people can get a bit complacent, but it is important not to rest on one’s laurels. I would like to see another startup becoming really successful, just like Skype was,” he remarks, adding that by comparison, Switzerland is still creating its own start-up culture, whereas Estonia is clearly ahead on this front.

Although he values his homeland Switzerland highly, Wihler appreciates the ease and speed with which he can get out of the town to a place where there is no one around.

“In Switzerland, it is not as easy as that,” he notes, while insisting that the roads and infrastructure has improved immensely since he first moved to Estonia: “There isn’t much congestion on the roads here, unlike in Switzerland,” he adds.

“The clean air here is something you have to advertise; it is becoming a rarity in the world. And it’s the same with the clean water.”

Another asset, he mentions, is the clean air: “The clean air here is something you have to advertise; it is becoming a rarity in the world. And it’s the same with the clean water.”

Professionalism is the key

In his day-to-day work, Wihler also deals with many foreign professionals who have also relocated to Estonia, and he is surprised how efficient the immigration services have become.

“When dealing with public services in Estonia, they are all so good, but especially the immigration services – they are super nice, super polite, and super-efficient. Even the restaurants are not better here,” he laughs.

Over the 15 years he has been here, Wihler has seen many changes in Estonia, but there are some fundamental constants that have kept him here throughout.

“The quality of life is really high here now: you have almost a frictionless society, nice restaurants, clean air. Yes, the prices are also higher now – occasionally I’m surprised that they can be so high, especially in restaurants and hotels – but sometimes you don’t want to be seen as cheap country; too cheap is worse than too expensive,” he remarks.

“Honesty, respect, trust – that is why I’m still here.”

Wihler concludes that what really matters is that the level of professionalism is really high: “Lots of companies have very good business etiquette here in Estonia. Honesty, respect, trust – that is why I’m still here.”

This interview was first published in print magazine Life in Estonia. Photos by Atko Januson.