Andrew Suttaford visits Sillamäe – once a secret town that was administered not as a part of Soviet Estonia, but as an exclave of Soviet Russia itself.

This article was first published under the headline “A Soviet Brigadoon – The strange history of Estonia’s Sillamäe” by nationalreview.com.

It’s not easy to surprise Toomas Hendrik Ilves, Estonia’s sharp and savvy president, but I reckon I succeeded. In September, I was in Tallinn, the Estonian capital, to interview him for National Review. In the small talk before we turned to the euro, economic recovery, Russia, the usual, he asked me where else I had been on this visit to his country. “Sillamäe,” I replied. The presidential eyebrows rose, just a bit. Maybe there was a word thrown in too, an “interesting,” something like that.

The author of the Lonely Planet’s 1994 guide to the Baltic States and Kaliningrad would have been blunter. After explaining that Sillamäe had been “built after WW II to support a military nuclear-chemicals plant,” an over-simplification that will do for now, he went on to tempt the tougher end of the tourist trade with this: “according to press reports, the plant’s waste dump contains several tons of radioactive and highly toxic wastes, surrounded only by an earth wall 10 meters wide and is already contaminating ground water and the Baltic Sea.”

It was worse than that. The waste dump, euphemistically a waste depository, was a large lagoon, a Leninist lake, toxic and vile, described by the man responsible for cleaning it up as a “uranium pond” hosting some twelve million tons of a sludge containing “uranium, heavy metals, acids and other chemicals.”

A testament to Soviet environmental sensitivity, it was open to the air, set on far-from-ideal clay, encircled by a poorly constructed wall, and located just a few yards from the sea. It leaked, and the overspill after heavy rainfall added to the mess. In 1993 the International Atomic Energy Agency labeled the site a serious radioactive risk. Four years earlier the New Scientist had reported that many of Sillamäe’s children were losing their hair. The clean-up was finally completed in 2008. I was told that what’s left of the waste is buried (with other safeguards) under a man-made hill that juts out onto the Baltic shore.

“Will that do the trick?”

Other traces of Sillamäe’s strange history remain well above ground.

A three-hour trip to Tallinn’s east on a bus that will end up in St. Petersburg, this sleepy, gently-shrinking, largely Russian-speaking town of some 14,000 people is located at a point just a few miles from the Russian border – and at a moment poised somewhere between Estonia’s painful history and its infinitely more promising present.

Before the war, there had been just a few houses here, and a Swedish-owned shale oil processing plant. When Estonia’s Soviet “liberators” returned in 1944, the local variety of oil shale (dictyonema argillite, in case you were wondering) interested them very much indeed. Among the minerals that lurked within it was uranium, something which Stalin had – up to then – found rather hard to obtain, but wanted very badly.

The old Swedish works had been destroyed during the war, but a new production unit – Kombinat no. 7, and a new town that was intended to support it – was built, much of it by the forced labor of convicts and POWs. The latter included many Balts caught up in the conflict between their homelands’ Nazi and Soviet invaders.

More than half a century later, the facility’s new Estonian owners stripped away sheetrock in its administration building to reveal well-crafted brickwork. A section has been kept exposed as a memorial of sorts to those that worked – and died – here, often in appalling conditions. Just outside is a small Soviet-era monument to the Great Patriotic War, a war that Estonia was doomed to lose regardless of which of its totalitarian occupiers might prevail. History is a via dolorosa in this part of the world.

After the prisoners came yet more wreckage of war, those still remembered in Sillamäe as “the orphans.” As the plant – the USSR’s first fully operational uranium-processing facility – was completed, teenaged survivors of the siege of Leningrad were shipped in to be trained as additions to its workforce. Production started up, beginning with local material, but then switched to higher-grade ore shipped from all over Moscow’s empire. Some 100,000 tons of uranium were produced between 1946 and 1990 for both civilian and military use, a total exceeded in only two other sites in the whole Soviet bloc.

An exclave of Soviet Russia

The town grew, but behind a cordon of secrecy, denial, and security. It slipped off and on the map. Sometimes it had a name, sometimes a code. It was a closed town. Access was strictly restricted. It was years before Estonians were allowed to work there (and only a handful did thereafter). For a while, the town was administered, not as a part of Soviet Estonia, but as an exclave of Soviet Russia itself.

There was something else that set Sillamäe apart. Narva, a larger city nearby, and once a jewel of the Northern Baroque, was brutally and slovenly rebuilt after the war as a generic Soviet settlement with a population to match. To be sure, there’s some of that in Sillamäe, but this was a town with a very special purpose. Those who controlled it understood that it would work better if its inhabitants – who included some highly qualified technical staff – were treated better than the Soviet norm.

Sillamäe’s center is, I’ll say it, nice, a beautifully preserved showpiece for a Stalinist architecture that is, for once, neither botched, nor slum, nor Mordor. But in feel and former function, if not in appearance, it is also faintly reminiscent of the unsettling picturesque of the Village that housed The Prisoner’s Number Six.

This creates a vague sense of unease only underlined by the extent to which the past still lingers on here. This must be one of the few places in Estonia where the symbols of the old regime, the hammers, the sickles, the stars, can still be seen in public, discreetly incorporated into the pale, pastel facades of the buildings of downtown.

That they are still in place speaks volumes about the attitude of the locals, and, rather more reassuringly, about the self-confidence of the re-born Estonian Republic, and the relative sensitivity with which it handles the ethnic Russian minority (reduced now to perhaps 25 percent of the country’s population) that remains the most troubling relic of Moscow’s colonial rule.

The predominant architectural style at the town’s heart is what came to be known as “retrospectivist” (yes, really), backward-looking, fortified by the reassurance of a past that predated the storms of the 20th century. Many of the buildings play with neoclassical themes.

Beyond that there are stately white staircases with a touch of old Odessa about them, a neatly laid-out park, a curious statue of a man lifting, I think, a symbolic atom, a lovely tree-lined avenue, a dignified cultural center, and a fine cinema by the name of Rodina. That’s Russian for “motherland,” but whether that referred to the shared Soviet home or Mother Russia herself was never quite clear. Neither interpretation was likely to appeal to Estonians, but Estonia is a tolerant sort of place and the cinema, along with the cultural center, has enjoyed protected status for over a decade.

Across the street stands the town hall, inspired by the design of a traditional Estonian Lutheran church, something that the Soviets must have thought was innocuous enough to be the subject of pastiche. The same, presumably, could be said of the nods to traditional Estonian manor houses that can be seen elsewhere in town.

Uranium production in Sillamäe was abandoned in 1990. Soviet rule in Estonia collapsed the next year, and Sillamäe rejoined the world. The facility, renamed Silmet, was privatised, sold, resold, and sold again. Since 2011, by which time Silmet had become one of only two centers in Europe for the processing of rare earths (elements that are crucial for a wide range of electronics), it has been owned by the US mining group, Molycorp.

But Sillamäe itself, adrift from time and place, a Soviet Brigadoon but forever in full view, endures. There’s a tucked-away town museum (judging by the friendly, but astonished, welcome I received from the three or four ladies who preside there, I was the first visitor for weeks). Apart from some atrocious local art and a collection of dolls that looks as if it has been curated by a serial killer, it boasts a couple of rooms that give a bric-a-brac impression of everyday life during Sillamäe’s Soviet past.

Then again, wandering around town will do pretty much the same thing (if you ignore the well-stocked shops). Ethnic Russians continue to make up the overwhelming majority of the town’s population. Dreaming, perhaps, of the lost certainties of Brezhnev’s day, babushkas still wander down Mere Avenue as it sweeps grandly down to the Baltic. Lenin Avenue has gone, but there are streets named after Russian literary figures and the first cosmonaut too. Up by the bus station, there’s an imposing Soviet war memorial with flowers at its base.

But, despite pot-stirring by the Kremlin, and the occasional eruption (most notoriously over the removal to a less prominent place of another Soviet memorial — this time in Tallinn), time, the passing of the older generation, Estonia’s remarkable economic performance, and access to the rest of the EU have all brought a measure of live-and-let-live to relations between the country’s two principal ethnic groups. Unlike in Latvia, where the demographics are even more delicately balanced, there is no specifically “Russian” party represented in the Estonian Parliament, and once-noisy calls for the autonomy of the still hardscrabble Russian-speaking Northeast have died down. 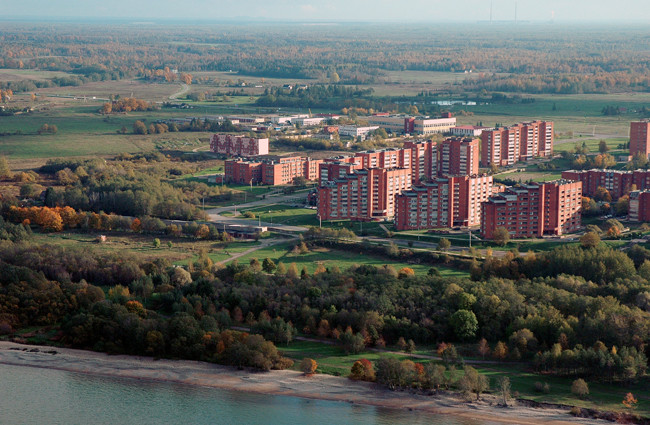 Both in Sillamäe and in Tallinn I was assured that younger Russians are at last learning Estonian (even if, understandably enough, their Estonian peers are reluctant to learn Russian, the language of their country’s former oppressor), something that may even give them something of an employment edge in a country that is in practice, if not in law, bilingual.

When it comes to this topic, David O’Brock, the engaging Ohio native (and long-time resident of Estonia) who runs Molycorp Silmet, is cautiously upbeat about what lies ahead. Almost all the workers at his factory are ethnic Russians and many, even the middle-aged and older, are studying Estonian, or other languages that could be of use in a world that now extends far beyond Moscow’s reach.

A once-closed town is opening up. And in more ways than one.

2 thoughts on “Sillamäe’s past, present and future”