Interview with Sir Malcolm Bruce, British Liberal Democrat member of parliament (MP) for Gordon (Scotland), Vice-Chair of the All-Party Parliamentary Group on Estonia, and Chair of the Select Committee on International Development. 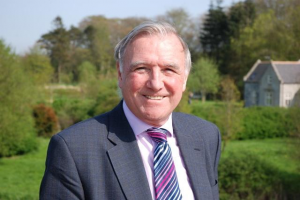 “Do you speak any Estonian?” is the first thing Sir Malcolm Bruce MP asks me, and I reply with a timid “natuke, ma saan hakkama. Do you?” Thankfully he doesn’t, but he tells me that his nephew does (“He picks up foreign languages far quicker than I do!”).

It is from his nephew, James Oates, that Sir Malcolm’s involvement in Estonia stems. James has always had a keen interest in heraldry and flags and one day noticed a flag he didn’t recognise, hanging outside a building in London. He discovered it was the office of the Estonian government in exile in London and ended up doing voluntary work for them, eventually taking a degree in international relations specialising in Eastern Europe. His “lobbying” over the years has turned his uncle into something of a fan.

The term “Eastern Europe” is dead

“I enjoy going to just Estonia – Estonia on its own, not as the last leg of a Baltic states tour,” Sir Malcolm tells me. This leads me nicely into a question about the term “Eastern Europe” – dead or not? His response is unequivocal: “It is absolutely dead. The concept of Eastern Europe is politically dead and almost culturally dead. It conjures up images of Soviet oppression and misery and ignores a real pre-Soviet democratic tradition that existed in Estonia and elsewhere.”

Wanting to take it one step further, I ask him where he would classify Estonia if he were in charge of naming European regions. “It is clearly Nordic – it has a shared history with Finland, Sweden and Denmark and it is good that the European and international media are finally beginning to realise this.”

I ask him for his view on Home Secretary Theresa May’s comments reported in The Observer (“fresh curbs on access to benefits for EU citizens”) and he is similarly even-handed. “It is right that all citizens show some concern with regards immigration and its consequences; however, I have no doubt that the overwhelming majority of immigrants in this country make a positive impact, both from within the EU and outside. And of course, we don’t want to go to people and say ‘Enough, your benefits are finished!’ but where, for example, someone has been claiming benefits for ten years, we should work with them to see if they are able to take on some kind of work and reduce their reliance on benefits. Not just because of our economic climate and reducing the deficit, but because it will also increase their own quality of life.”

“What I must point out however,” he continues, “is that this is coalition politics. Just because Theresa May says X should happen or Nick Clegg says Y should happen, it isn’t the end of the story – there is a robust system of debate in place, both within the coalition itself and internally within each party. The same is true for all coalition governments, including Estonia, so we must be careful to make clear what is and what isn’t official government policy.”

Enjoyable as our discussion is, I have to drag us back to Estonia, so I go for an obvious topic – cyberdefence. “Aaah, yes, that often comes up on the Joint Committee on the National Security Strategy, of which I’m a member,” Sir Malcolm says. “As Estonia is the only country to have dealt with a real cyber attack on its national infrastructure on that scale, it has a wealth of technical and practical experience to be shared.”

So what for the future, I ask. “Hmm, well, that’s difficult for me to say as an outsider. But Estonia has a lot to offer Europe, economically, politically and culturally. It absolutely must retain its competitive economy and ‘e-reputation’; these are vital to it remaining attractive to investors.”

Estonia needs to punch above its weight internationally

“Perhaps most of all, it needs to continue to ‘punch above its weight’ internationally,” Sir Malcolm points out. “I remember talking to an Estonian who told me that if the Russians really ever did decide to invade them, there was nothing they could do on a military level to defend themselves. Hence it must be a priority for them to always make valuable contributions to the international community in order to benefit from the shared defence it offers, amongst other things. I think EU, NATO and euro membership are key components of this strategy. Estonia has shown it is ready and willing to send troops into action [in Afghanistan] and that it has a wealth of knowledge to be shared.”

Perfectly on cue, the division bell sounds (summoning MPs to vote) and Sir Malcolm has to depart.