Natalia Hoffman, a former exchange student at the University of Tartu from Denmark, observes the Estonian fashion sense.

Every time I go travelling I check with online travel forums if there are any flea markets or car boot sales taking place wherever I’m going whenever I’ll be there. I do that because I think both flea markets and car boot sales are a fair, retrospective indication of the aesthetic sense of the nation I visit, since you get people who have just cleared their attics or basements selling stuff there. Others sell dead people’s junk from house clearances. I love fully-fledged junk shops and charity shops too. 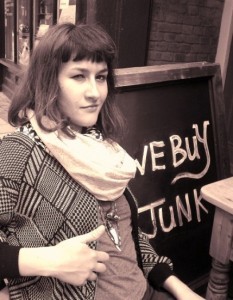 Charity shops, on the other hand, abound in clothes which local people feel bad about throwing away as they’re still perfectly usable, but for whatever reason won’t wear them anymore. Luckily, the guilt inherent to the feeling of responsibility for the environment can be easily dismissed as one dumps a bag full of used clothes in a charity shop’s metal container. Ergo, as Slavoj Žižek, a contemporary Slovenian philosopher and cultural critic, observes, by donating clothes to charity, one gives back to the world, makes a contribution, shows the capacity for care and global awareness, and by participating in a noble, large collective project, fulfils the ethical duty to do something meaningful. In return one is granted redemption from being only a consumerist… Charity shops make life so much easier. One has to love them for their concealed contradiction, and their function as a moral purgatory. Plus, you always get a bargain there.

And so, within a week of my stay in Estonia I checked out all such local shops and places. Buying pre-owned items in junk parlours gave me a clearer idea of the Estonians’ aesthetic backbone. And similarly, since in the winter time it turned out absolutely necessary to stock up on warm clothes, while browsing through clothing rails in both charity shops and company stores I gained an understanding of the autochthonous sense of fashion. As part of my research project, I also discretely stared at people’s outfits while in public (I made the interesting discovery that old Estonian women never remove their headwear or scarves in cafes and restaurants).

Now, if one takes fashion to be an expression of collective consciousness – reflecting the available resources, practical purpose and the dialogue between tradition and innovation – then the question becomes: what message does Estonian fashion convey? What does it have to say about its people?

The issue is more complex than the often bleak and confused street style would make you think at first. Indeed, despite the fact that Estonia is a small country, it is remarkably rich in the variations of folk costumes, with peculiarities and tendencies in fashion being very much region-bound. Conveniently, these can be looked at from a historical-geographical perspective.

In the catalogue accompanying the permanent exhibition at the Estonian National Museum called “Estonia: Land, People, Culture”, it reads:

“Owing to trade contacts between its larger towns, particularly Tallinn and Narva, North Estonia has been receptive to all kinds of innovations. South Estonia has been conspicuously conservative, preserving its cultural traditions, especially in Mulgimaa and Setumaa. On the western Estonian islands (in Kihnu partly even nowadays), as well as in Setumaa, old traditional culture still survived in the first half of the 20th century”.

And so, with the northern part of Estonia enjoying access to the sea and thus more contact with foreigners, new trends, different working techniques and modern material would first reach the ports of Tallinn and Narva, and from there they’d slowly spread all over the country. Convenience of location has primed northern Estonians to be more open to novelties and modernisation in fashion. And while in the second half of the 18th century they already began wearing shoes, preceding their compatriots by over a century (as the exhibition catalogue states), these days the difference in clothing style between northern Estonians and the rest of the country’s dwellers is also clearly visible. Tallinn is adapting fast and looks towards the West, thirsty to mix with Western neighbours. Not only is Tallinn full of designer shops, vintage shops and its first H&M, but the city is also host to the prestigious Fashion Week event running yearly since 2007. 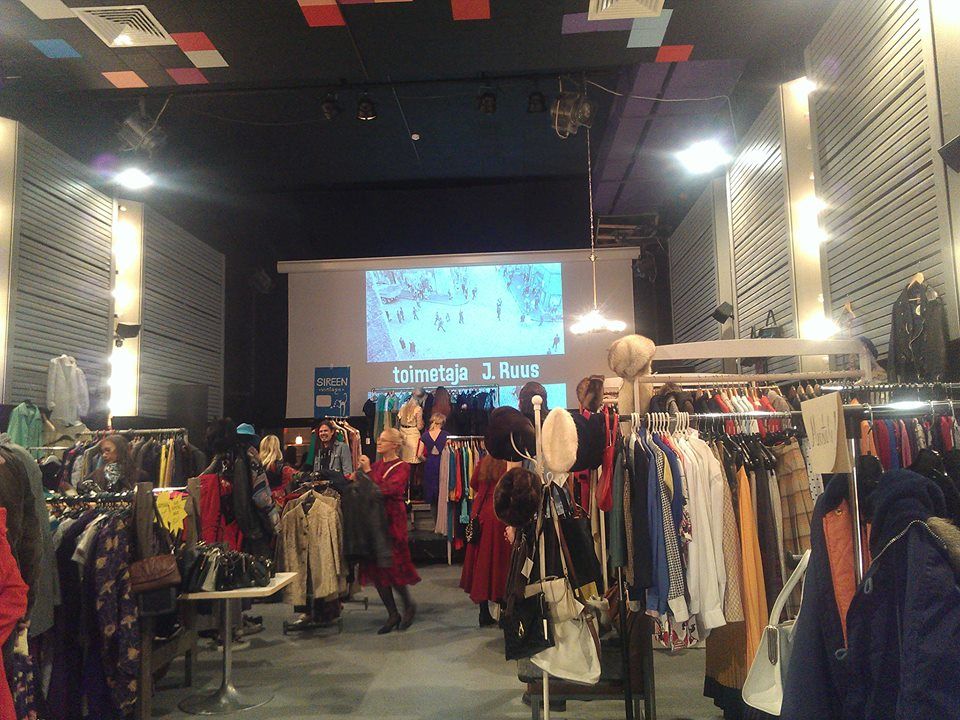 Head further south and the clothing traditions have been slower to fade. Inland and away from urban centres, changes in folk costumes took place in single details, so that several ancient garments persisted even as late as the 19th century.

Historically, with the movement of country people rather restricted until the second half of the 19th century, every parish developed its own traditional set of clothes and fashion culture. The style of dress in southern Estonia could then be easily divided into several clearly differentiated groups (depending on the region). To make social communication easier, separate items of costume and jewellery, their colour and how they were worn served to identify the wearer’s age, social and marital status and, of course, the origin, since the dress code was so distinct across parishes. For example, a married woman was obliged to cover her hair and wear an apron. Countrymen believed that an apronless mistress of the farm would damage the fertility of the fields. 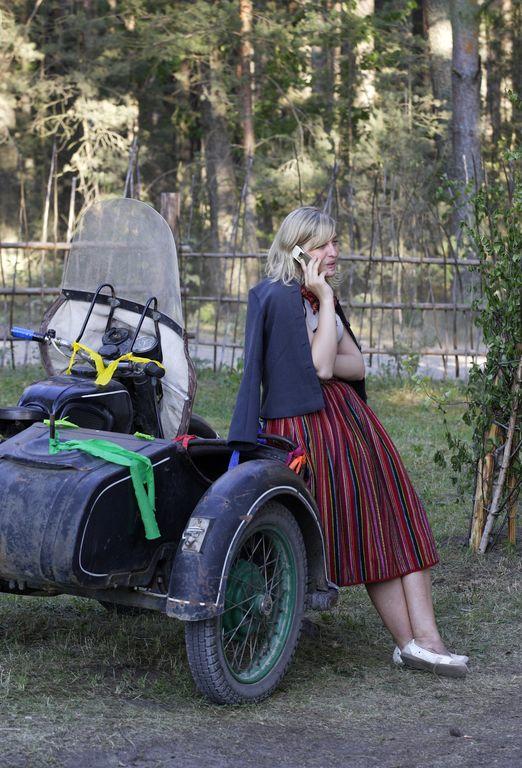 In western Estonia, which is composed of several islands, clothing developed quite differently from that of mainland Estonia. The peculiarities persisted and deepened, and as the islanders were rather isolated, something of a fashion microclimate developed there.

The tiny island of Kihnu, inhabited by some 600 people, deserves a special mention. Its culture is protected by UNESCO and rightly so because the place is a curious cultural oasis. If Steven Spielberg’s “Back to the Future” had been filmed there, it would have probably been a box office failure due to no twist in the plot, as the past and the present in Kihnu look pretty much the same. Time there goes on its own track and fashion has defied the whims of the modern world. Women’s traditional stripy skirts worn in everyday life are the island’s signature look. For many centuries the practice of waving them has been devotedly passed from generation to generation. The different stripes on the skirts carry, of course, various meanings, and even though to a casual visitor the skirts all look alike, they aren’t.

Having said that, the younger generations of Kihnu now negotiate between tradition and modernisation, and although the traditional outfits are to be worn on a daily basis, some rebel against this rule.

In general, Estonians love to put on their national costume on a range of occasions, from summer solstice celebrations to song and dance festivals to weddings. One frosty afternoon in Tartu I witnessed the town’s entire main square taken over by people in traditional attire, joyfully performing Estonian national dances. Even politicians turn up at celebratory occasions in traditional costumes. This might have something to do with reclaiming and freely celebrating Estonia’s long-repressed national identity.

While high-school students last winter visibly took a liking to polyester jackets with colourful geometric patterns, the university students usually pay more money for beer and less attention to how they dress.

But student fashion is a tricky one as no matter in which part of the world you’re studying, students have always had to do with little money. This brings me to the curious case of underrated Estonian second-hand and charity shops. Boy, the things you can find there if you dare to rummage through piles of clothing! Not once have I walked out with scores that felt like a million bucks, and a handful of fantastic quality vintage things often imported from neighbouring Finland or Denmark. Not once have I suspected the sellers of having any idea how much garments like that were selling for in the West. But although here the clothes are great and cheap, the demand is low. This is curious, because with Estonia’s longing to mingle with the West, this is where everybody should dress. Naturally, Tallinn’s vintage shops have already realised that and resell the second-hand shops’ and charity shops’ bargains at ten times their price, but with a label that says “hot fashion”. Now, the game is to get first to the Humana charity chain or to your local privately owned second-hand shops the next time you need a pair of trousers or a t-shirt and to have fun digging for treasure.

Natalia Hoffman is an independent researcher into the visual communication of Estonia with the Estophilus Programme, a recent exchange student in Tartu from Aarhus University, Denmark, where she’s finishing her master’s degree in cognitive semiotics.

Disclaimer: This article was first published by the University of Tartu: http://blog.ut.ee

1 thought on “The curious case of Estonian fashion sense”