Estonian writer Anton Hansen Tammsaare wrote in his most famous book, “Truth and Justice”, that one must work hard and love will follow. Piret Kuusik contemplates about the true meaning of this wisdom – and says that Tammsaare thought it with irony.

When I was a child, I remember my grandmother saying, “Work hard, then comes love”. From her perspective, it was a motivation for working, because hard-working people will be awarded. In this context, the reward was love.

This sentence comes from a quote by Anton Hansen Tammsaare and originally it is the following: “Work and put effort in, then love will also come.”

“The more I think about it, the more I start thinking that Tammsaare thought it with irony.”

The more I think about it, the more I start thinking that Tammsaare thought it with irony. The way my grandmother and many Estonians use it today does not actually serve its purpose.

In the Estonian culture and daily life, this sentence is used in two ways. Firstly, as I mentioned earlier, it is a justification or a motivation for working. It is presented to comfort work, because it promises to pay off the effort one day. Secondly, it is said during difficult and hard times. It is a way to express hope and get through tough times. When hard times hit, work, because one day love will come and then everything will be alright again and you will forget about difficult times.

But again, the more I think about it and draw on my personal experiences, I believe that Tammsaare meant it ironically. As many say, Tammsaare’s writings from a century ago portray our society nowadays just as well as any contemporary writing and this allows me to construct my following argument. I think that “Work hard, then comes love” was actually written more as an observation to describe our behaviour and not as a “motivational quote” as it is mainly used today. 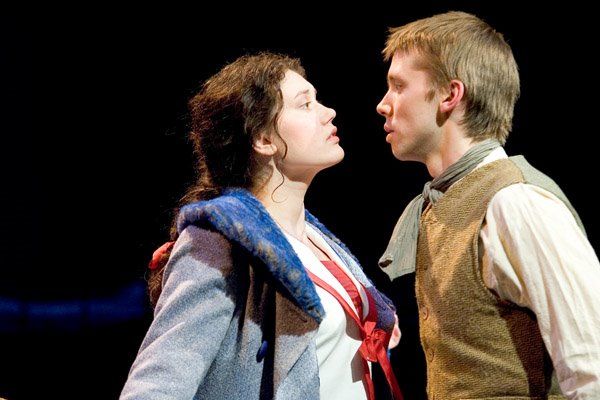 Let me explain – when I work hard, it means I invest time into working and consequentially I do not have much time for loved ones around me, eg family, spouse, children, close friends and acquaintances. But my experiences and observations have taught me that the key to love and good relationships is investing my time and attention into them.

When I am occupied with work all the time, I do not have any time to invest into building relationships and into people, which is the only source of love (which is arguable, but for the sake of the argument, I assume love is received by people). I do not take the time to create mutual memories, learn their interests or share and find similar understandings and beliefs.

“Where does the love come from, when you work all the time and do not invest time into love?”

Therefore, the gap between me and potential lovers, my family, my friends and dear ones increases up to the moment when loved ones eventually will leave, because I am never there, since I am working hard. So here comes my question – where does the love come from, when you work all the time and do not invest time into love?

This is the point where I think Tammsaare himself showed it to us and allows me to say that he considered it with irony. The quote goes further by saying: “You have done and also my mother has done, otherwise she would have not died so early, but love did not come and it has not come until today to Vargamäe.”

The quote says that Andres has worked hard and also Krõõt did, but love did not appear from anywhere. All this time was spent on working on the farm and building the farm for future generations – and now I argue – instead of taking time now and again for loved ones.

Farm was put first believing that good work will reward itself one day. That left love and happy relationships with dearest secondary. I understand that the intentions were good and at the end of the day it was all made for children. But the lack of time in their relationship with parents and Vargamäe did not offer them the time to learn to love it. It demonstrates that love does not appear magically nor it will continue to exist supernaturally, but love needs hard work and time to be invested into it.

I think this is what Tammsaare meant and I think he wrote this line, “Work hard, then comes love”, with a sense of irony by showing that being hard-working in strictly speaking does not bring love. Love does not appear mystically from somewhere; rather one must work for love, and on love, as well.

“Love does not appear mystically from somewhere; rather one must work for love, and on love, as well.”

“Truth and Justice” (note from the editor)

“Truth and Justice” I-V, written in 1926–1933, is a pentalogy by Anton Hansen Tammsaare (1878-1940), considered to be his most famous work, and one of the foundational works in Estonian literature. Tammsaare’s social epic captured the evolution of Estonia from Tsarist province to independent state. It was based partly on the author’s own life and centered on the contrast between the urban middle class and hard-working peasantry.

The book series can be seen as a thorough overview of developments of Estonian society from about 1870 to about 1930; it presents an epic panorama of both the rural and urban societies of that era. Tammsaare’s primary conception was that under the then-applicable conditions, reaching a harmony of both truth and justice is impossible, and thus, while many characters will seek it, none will reach this destination.

Piret Kuusik is a junior researcher at the Estonian Foreign Policy Institute at the International Centre for Defence and Security in Tallinn, Estonia. Her work focuses on Europe and the EU, the Baltic Sea region, Brexit and Franco-German relations. She holds a BA in international relations from the University of York and an MA in international security from the Paris School of International Affairs. You can follow her on Twitter.