Simpson Buglass, Honorary Consul to the Republic of Estonia in Scotland, encourages Estonia to display its Nordic heritage more bluntly.

It seems fairly obvious that Estonia is Nordic as you travel around the country or if you have read a little relevant history about it, but it’s not obvious to the BBC, it would appear. That normally impressive, impartial and well-informed organisation has fourteen references to Soviet/Russia in its country profile overview and none specifically about Estonia’s Nordic cultural identity. Of course, the historical habit of lumping Estonia, Latvia and Lithuania into one amorphous “Baltic states” group doesn’t help either as it wrongly reinforces the notion that there is some form of cultural homogeneity beyond geographic adjacency.

In fact, how does a small country on the fringe of Northern Europe change international perceptions about its own cultural affinities? Estonia’s current strategy to be accepted as Nordic appears to be a potentially long war of attrition by public announcement. Its prime minister, president, and various ministers all felt the need to point out that Estonia was a Nordic country to the rest of the world during 2015 and for how long will this require to be repeated until recognition from the rest of the world is achieved? Ten years, fifty years, or perhaps never; and in fact is the rest of the world even interested in how Estonia feels about itself? I suspect not. It might be an uphill struggle to gain international acceptance without more positive action than a series of international announcements by high-ranking officials over an indeterminate timescale.

But what if Estonia was to make a unilateral declaration of cultural identity by adopting a new flag based on the familiar Nordic cross design? This is not a new idea, of course, and it has been proposed many times in the past.

Here is one Estonian Nordic Cross design suggested in 2001 and it can be immediately seen that it is both Estonian and Nordic. 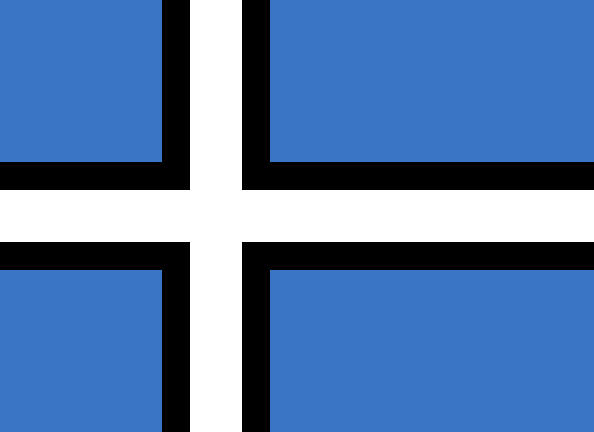 Irrespective of international acceptance or indifference towards Estonia’s Nordic message, a flag such as this would preserve the national colours and, at a stroke, make a statement of the Nordic identity by Estonians which would be understood by the rest of the world. It would also remove any confusion with the tricolour flags of its immediate land neighbours which may exist at present.

It could even be argued that Estonia designed the Nordic cross, as legend has it that the first flag of this type, the Dannebrog of Denmark, fell to earth in Estonia in 1219, so for design inspiration you can’t get better provenance than that.

“So Estonia, if being Nordic is an important part of your self-identity then why don’t you rearrange the colours of your flag into a Nordic cross?”

For those who would be concerned about loss of identity through changing the flag, there are also precedents for change which are based on aligning flags with national/public identity. In fact one such change is in progress; during 2016, the former British colony of New Zealand will vote to change its flag from its current colonial arrangement to one based on a contemporary expression of self-identity. The leading design shows retention of the Southern cross constellation to indicate the country’s geographic location in the southern hemisphere with the addition of the silver fern, the internationally recognised symbol worn by New Zealand’s sportsmen and women around the world.

There are also recent additions to the Nordic cross family of flags. In 2007, the Scottish Orkney isles adopted a Nordic cross arrangement as its official flag in a clear statement about its Norse heritage, something the adjacent Shetland archipelago (also in Scotland) had already done in 1969.

So Estonia, if being Nordic is an important part of your self-identity then why don’t you rearrange the colours of your flag into a Nordic cross?

And if you did, then your flag could do your talking for you.

Simpson Buglass is an Honorary Consul to the Republic of Estonia and is based in Scotland. He is a Chartered Surveyor and head of the Aberdeen office for Savills, a global real estate service provider.

6 thoughts on “Simpson Buglass: Estonia is Nordic, isn’t it?”