The European Union needs a new Convention of the Future of Europe, whereby the member states, meaning its citizens, can adopt decisions regarding the organisation of the future Europe, said President of the Republic of Estonia Toomas Hendrik Ilves and Giuliano Amato, former prime minister of Italy, at a discussion held in the European University Institute (EUI), Florence. 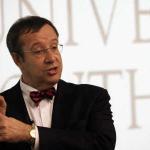 The current decision-making mechanisms of the European Union are slow, clumsy and get in the way of rapid progress, stated President Ilves and Giuliano Amato, the Vice President of the Convention of the Future of Europe, which drafted the Constitution of Europe. They both see the future of the EU as more federal and consider the possibility of the European Parliament having two chambers, in which one chamber would equally represent all the Member States, and the other chamber would be elected according to the current procedure, as one of the options.

However, President Ilves warned against so-called trans-European elections that would inevitably include advantages for larger member states. “This would break the European Union,” he said. “National identity and the interests of all the member states must be respected. This is a part of the solidarity that the European Union relies upon.”