Oliver Bowers addresses Estonia’s public misconception of feminism and gender issues, and argues why Estonia does in fact need feminism. In his opinion, rather than cancelling each other out, feminism is a tool with which to achieve equality.

Pille Gerhold, a researcher at the Institute of Ecology and Earth Sciences of the University of Tartu, writes in a recent opinion piece on ERR News that Estonia’s feminists are shooting themselves in the foot by supporting extended maternity leave, since this causes increased inequality in the workplace. She bases her entire argument on the mistaken, and woefully outdated, assumption that parental leave is exclusive to the mother. The appropriate (and contemporary) term is parental leave, since it factors both parents into the equation of child rearing. Furthermore, Gerhold absurdly concludes that feminism and equality are incompatible and that the latter is to be preferred.

This is yet another example of the unfortunate and narrow-minded perspective on gender which I have frequently come across during my time as an Estonian resident. It has motivated me to address what I perceive as Estonia’s public misconception of feminism and gender issues, and why Estonia does in fact need feminism. I want to show how, rather than cancelling each other out, feminism is a tool with which to achieve equality.

It is a solid fact that countries in which part of the parental leave is allocated exclusively to the father, women’s financial situation have markedly improved. This affects the wage gap, financial assets (eg savings) and pensions. It also gives parents an incentive for a more equal relationship to their children, who in turn will grow up with a less normative and restrictive view of parenthood.

An old-fashioned Estonian patriarch (mainly generation X and earlier) might be spotted in public with a protruding stomach, a sullen facial expression and perhaps even a can of beer in his hand, but is rarely observed as an emotionally involved father. Decades of hard work, commonly coupled with heavy drinking and a predominantly meat-based diet, usually takes its toll in the form of heart problems and premature death. If the entire lifespan of a father is bereft of emotional attachment to his children, society as a whole suffers. Furthermore, a more equal division of labour would reduce poor male health in Estonia; 2393 men aged 20-65 (working age) died in 2013, compared with only 989 women (aged 20-65).

The eight-hour workday is a product of the same past society which assumed that women would stay at home and run the household, leaving the man to solely “bring home the bacon”. Converting into a six-hour workday (with maintained wages) would address several issues at once: unemployment, stress and exhaustion from overworking, over-consumption, carbon emissions and the unequal division of household and child minding duties amongst couples. To put it simply: this would give both parents more time with their children. This is a perfect example of feminism’s broad take on social issues.

When France introduced the 35-hour working week in 2000, the wage portion of France’s GDP increased for the first time in decades, and the demographic groups who benefitted the most from this reform were shown to be highly educated people and mothers.

Estonia’s liberal and conservative government would of course strongly oppose such a reform, on the grounds that it involves too much pressuring by the state, and a fear of anything which remotely resembles socialism. The fact is that conservatives around the world have throughout history consistently opposed measures introduced towards giving women equal rights, such as the right to vote. Furthermore, the Swedish state has successfully combined socialism (in the form of a strong and equality-minded social security) with a free market economy for decades.

Estonia and the largest wage gap in Europe

With the current speed of progress, it will take at least one more century before the wage gap is entirely gone, thus the necessity of a reformative push should seem obvious. And the wage gap is due to much more than maternity leave, it is a symptom of sexist employment practices and socially integrated patriarchal structures. A major study by the American Association of University Women found that the wage gap sets in a year after graduation from college, thus having little to do with maternity leave.

An argument which I’ve repeatedly come across is, “I have never been – nor noticed anyone else being – discriminated, and I don’t get a smaller wage than my male equals, therefore feminism must be unnecessary.” First: consider yourself lucky to never having been discriminated, secondly: take a good look around. Estonia has the largest wage gap in Europe at 30.9%, the average (gross) monthly income is €776 for women, and €1,041 for men. This affects pensions, among many things. Since Estonian women on average live twelve years longer than men and earn significantly less, they are much more likely to live in poverty at old age. Even if you have never been discriminated yourself, would you want your grandmother to end her days in poverty? 29.9% of women aged 65 and over were below the poverty risk threshold in Estonia 2012, compared with 13.3% of men.

Professions which demand a lot of human interaction and are emotionally taxing are commonly dominated by female employees. These professions are worldwide consistently valued less than professions dominated by men.

Consider this comparison between the education and construction sector in Estonia :

– In the education sector 79% of employees are women, and in the construction sector 94% are men

Of those in Estonia with higher education, 65% are women, which clearly shows that level of education has very little to do with the wage gap. On the contrary, it shows the value of women, and their education, has somehow suffered from inflation. An astute observer might point out that the difference between the above sectors is that the value of construction is decided by the market, while education is not. This further proves the necessity of a reformative push; there would be many social benefits for the education sector if its employees were more highly valued. This is another good example of feminism’s broad take on social issues. And furthermore,there is a substantial gender-based wage gap within each economic sector; within construction alone the wage gap is 21.3%

Women constitute more than half of the Estonian population, but fill less than 20% of the seats in parliament (Riigikogu), and less than 40% of ministerial posts in the government. For women to have an equal share of legislative power, society’s integrated patriarchal hierarchies have to be challenged.

An issue which feminism is setting out to tackle globally is the extensively objectified female body. Advertising, popular culture and pornography all offer a degrading view on women, which furthers a social acceptance of women as objects. This has a substantially negative effect on the confidence of female teenagers during formative years and partially validates a culture of rape and sexual violence against women.

One prominent example in Estonia is the advertising that the department store Kaubamaja brings out anytime they have a large sale. It features an anorectic-looking naked woman with the banner “OMG” across her breasts and the banner “WOW” covering her crotch. In this campaign a naked (most likely photoshopped) woman is used to signify cheap products, thus she is tastelessly portrayed as a cheap commodity herself.

How does that affect the confidence of the vast number of teenage girls who see that poster daily? And what message does it give teenage boys? On their website kaubamaja.ee, the department store lists how it practices social responsibility, stating, “we care about people”. True social responsibility on Kaubamaja’s part would be to not portray women as objects and to not promote unhealthy, unrealistic body images. Especially not on giant posters plastered all over the department store’s exterior walls. 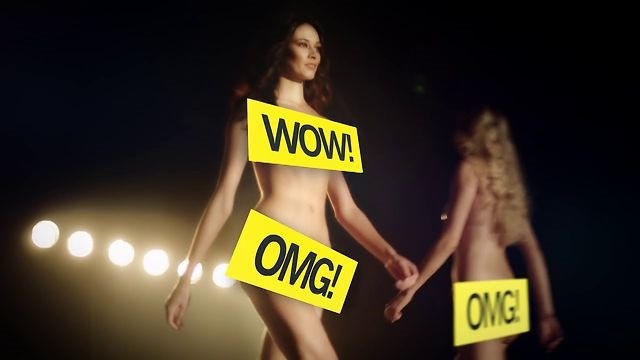 Another example is of course the “boob column” that appears regularly on the front page of postimees.ee under the general pseudonym “Risto Mehine”, since no “respectable” journalist wants to put their own signature on such items. It is categorised as “sport” and mainly features a lightly clad woman, usually a partner of some famous footballer. Since it has no apparent news value, the only reason for this regular trash feature seems to be generating clicks from male readers, at the expense of objectified women. If a major national news source can stoop this low without any repercussions or ensuing public outcry, that clearly illustrates the need for feminism.

A common misconception seems to be that feminism pits men against women, based on the absurd assumption that giving women increased rights and equal possibilities would somehow threaten the race of men, when in fact the very point of an equal society is that everyone would benefit. Feminism is simply about addressing, and attempting to tackle, inequality in any form. And to promote a critique of obsolete and harmful stereotypes of men and women, for the benefit of all genders. A broad and open-minded perspective is crucial in order to achieve anything.

The opinions in this article are those of the author. Cover photo: Rosie the Riveter.

Oliver Bower is Tallinn-based media analyst, freelance writer and masters student of composition at the Estonian Academy of Music and Theatre.