Estonians take a lot of pride in our vast green forests and pure groundwater; but how do we measure up to our neighbours when it comes to energy use and pollution?

It can be safely said that the entire world was closely following the COP21 conference in Paris. The heightened interest can easily be understood – so much depends on these talks. For some parties it is a question of continued economic development which could easily be hindered by prohibitive measures, for some it is a question of survival as expressed by the Fijian delegation.

In this light it is easy to understand the enormous buzz both on social media and close scrutiny by the traditional media. Among the rare opposite examples we see Estonia where hardly any articles have been published – a few on the prime minister’s visit and most dating from months ago, long before the event itself.

Estonia among the worst offenders on climate change

Under closer examination we discover that this silence is even more surprising, seen that Estonia is among the worst offenders on climate change according to most indexes published. In the Climate Change Performance Index (CCPI 2016), Estonia dropped by five places and was ranked 51st (48th place out of 58 countries whereas “places 1 to 3 are vacant because, again, no country has done enough to prevent the dangerous impacts of climate change”).

For Estonia, this regression also brought the rating of “very poor” instead of “poor” from last year, confirming the spot of the least performant EU country on climate change. Of all the European countries only Russia scores lower than Estonia. 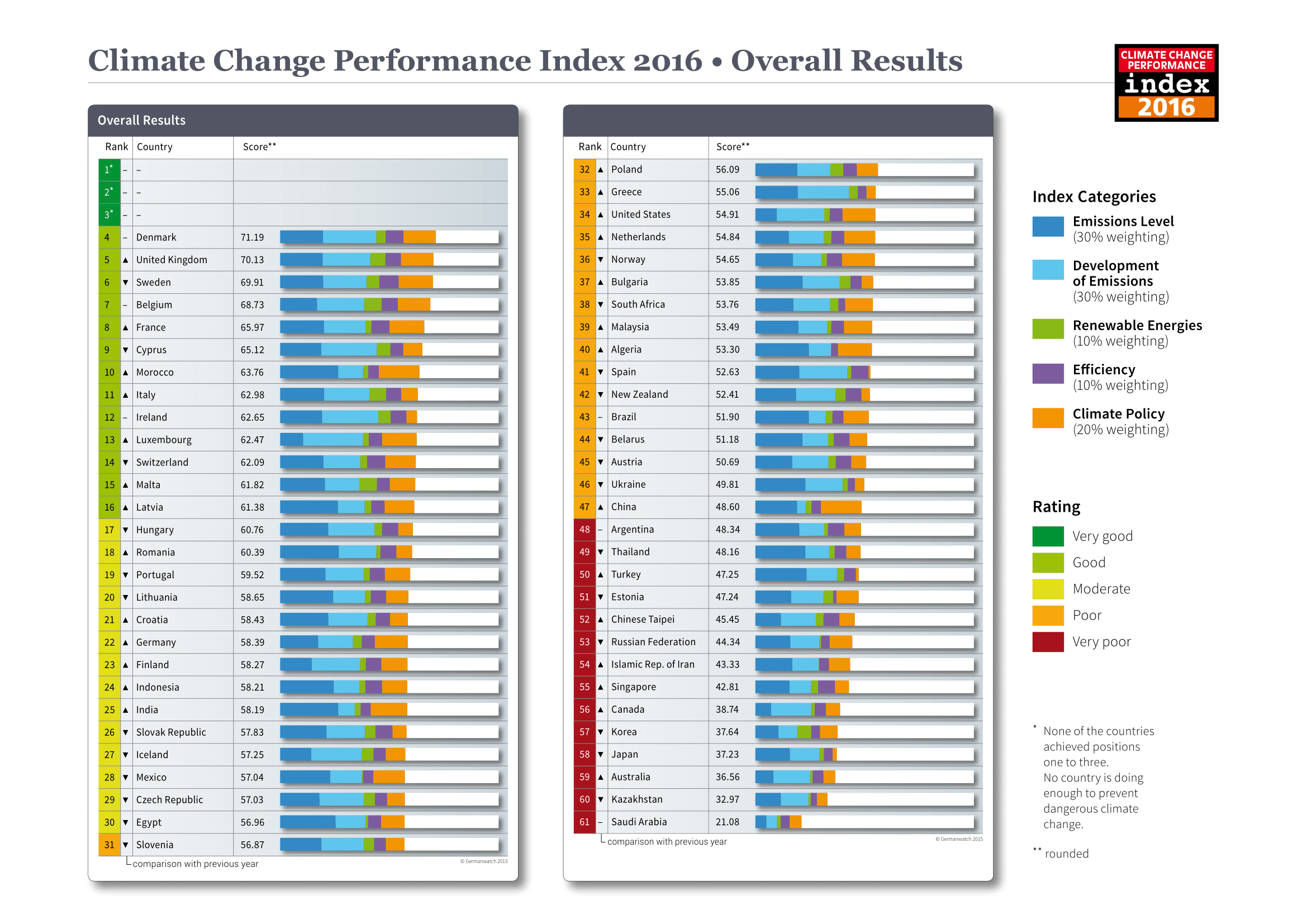 Naturally, with the small size of Estonia it might be difficult to grasp the urgency of the problem – Estonia only accounts for 0.06% of global CO2 emissions making the impact virtually non-existent, but in comparison with the GDP, the heart of the problem is unveiled. Estonia accounts for 0.03% of the global GDP meaning that Estonia is one of the four EU countries with negative emission efficiency (the other three being Poland, Czech Republic and Bulgaria) but whereas the other three remain within 10% of more pollution generated than their “fair share”, Estonia is the only one to waste double resource to generate the same amount of value.

One should not easily dismiss neither the relative strength of the country due to an Estonian seat in the Baltic Sea Rim co-operation and as being currently the main nuclear driver for future developments which makes any action, or the lack thereof even more impactful. 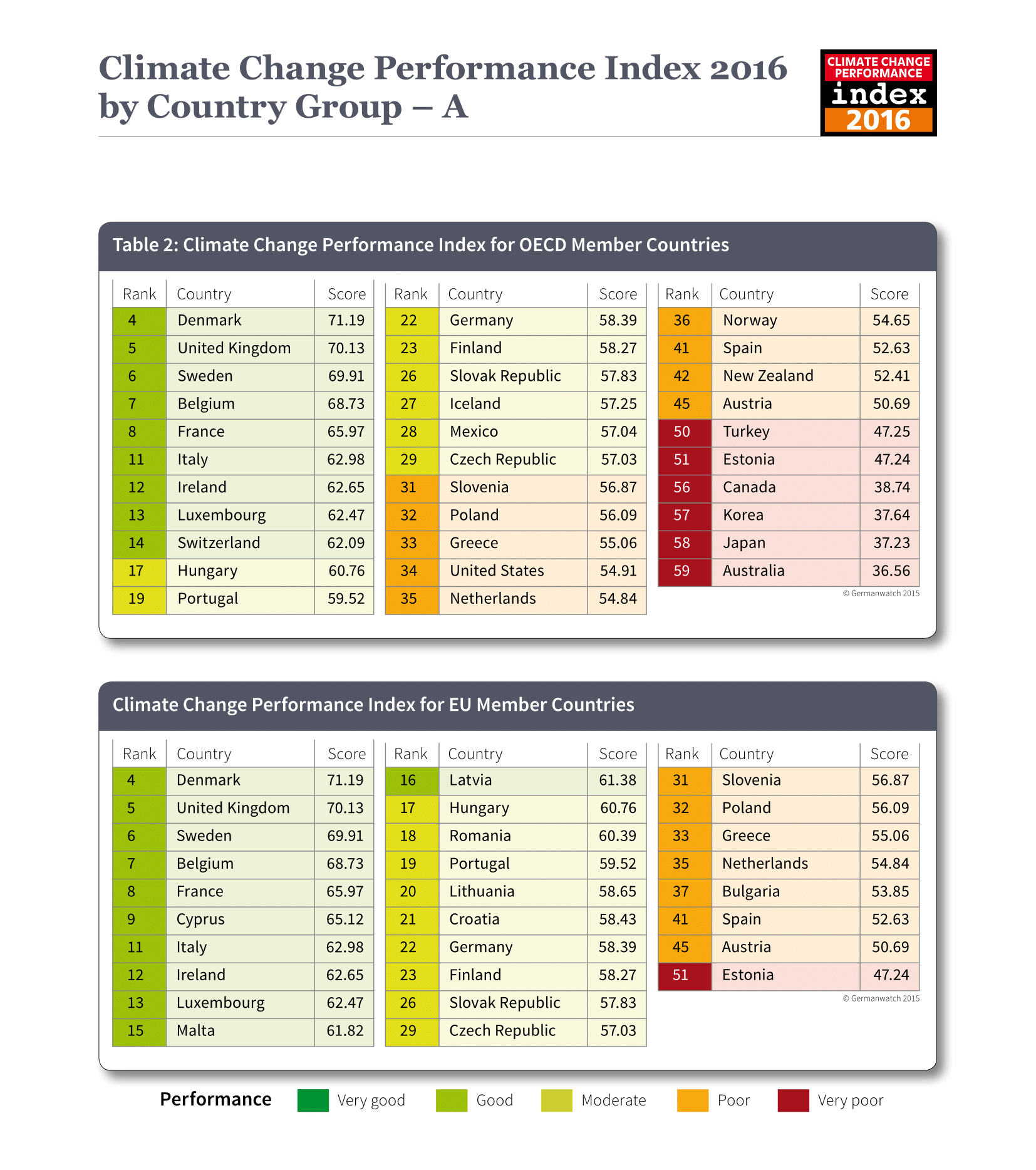 Now this record-breaking level of inefficiency alone is something that would deserve an angry response from Estonians who pride themselves for innovation and efficiency; it should also be mentioned that in the CCPI study Estonia is not only less efficient than all of the EU and OECD countries, but the most inefficient country that was studied.

It all comes down to ignorance

Knowing Estonians I can understand why people are not rioting on the streets, but the lack of public debate is surprising as Estonians tend to be very vocal and opinionated with all dividing articles usually attracting hundreds of online comments. What could be the reasons for this deafening silence?

“This record-breaking level of inefficiency alone is something that would deserve an angry response from Estonians who pride themselves for innovation and efficiency.”

It all comes down to ignorance – not the harmful, uneducated kind, but perhaps even worse – being ignorant by choice due to lack of will to tackle the problem. Eurobarometer is conducting Union-wide polls on public opinion on climate change every five years. The results for Estonians are bad and worsening.

Whereas in 2008 Estonia ranked close to the EU-average when answering to questions such as “Personally, do you think you are well informed or not about 1) the different consequences of climate change 2) the different causes of climate change?” with a little over 50% claiming to be well-informed, but a difference of attitudes was already in place with the Estonians being the most pessimistic on possible actions that could be taken. Estonia was the only country with the majority of polled believing that the climate change is an unstoppable process with nothing for us left to do.

“Estonia was the only country with the majority of polled believing that the climate change is an unstoppable process with nothing for us left to do.”

A further downturn became evident in the 2013 opinion poll. Estonians were systematically the most numerous to pick “tend to disagree” or “totally disagree” to virtually all the questions: “Have you personally taken action to fight climate change?”, “Fighting climate change and using energy more efficiently can boost economy and jobs in the EU”, “Reducing fossil fuel imports from outside the EU could benefit the EU economically” and finally, again, the highest number of people disagreeing with the importance of governmental policies and citizens’ choices such as insulating homes or buying energy-efficient lightbulbs, coupled with the lowest or second lowest number of people agreeing with the aforementioned proposals.

In the end, this all comes down to missed opportunities. Estonians like to take pride in the ambitious goals that have been achieved and the examples are numerous, digital solutions for public services or universal internet access.

On the other hand, when it comes to environmental causes, it surprises me that these nature-loving people who are by the way, going through one of the wildest organic foods crazes I’ve ever heard of, seem to have let the train leave the station without even trying to get on. It seems as if everything was set for Estonians to excel – a need for daring solutions to work locally but that could be implemented globally, something off the trodden path as the usual green solutions – solar energy, nuclear and hydroelectric plants are all prohibitive either due to financial or natural reasons.

“It surprises me that these nature-loving people who are by the way, going through one of the wildest organic foods crazes I’ve ever heard of, seem to have let the train leave the station without even trying to get on.”

Furthermore, the technologies exist, either more utopian – Estonia has the third highest potential for wave energy in the EU, or proven and working solutions, such as existing hydroelectric plants and further development of biofuel, solar and wind energy could easily satisfy the nation’s needs. The current main source of energy, which is also the main culprit for Estonian shameful ratings, could and should be used more effectively.

Estonia owes its energetic independence to oil shale, called the “burning stone”, which is a poor oily rock with similar energetic properties to lignite – currently used by Germany and Greece, most notably. It is well known that the oil shale can be first transformed into oil rather than directly burning it as coal meaning times higher efficiency and much lower carbon emissions. Whereas the program is in place, public and governmental support seems to be low and Estonia still continues to burn its only fossil resource in the least effective manner.

“It is well known that the oil shale can be first transformed into oil rather than directly burning it as coal meaning times higher efficiency and much lower carbon emissions. Estonia still continues to burn its only fossil resource in the least effective manner.”

Although some good initiatives are in place – a country-wide network of charging stations for electric cars with governmental support for acquiring the car itself, what seems to be lacking could be perhaps a sense of passion, as in Germany when Energiewende – the Energy Transformation was started, or not to look from far, as the Tiger’s Leap programme, which, through the development of the network infrastructure and the democratisation of the internet, brought Estonia to the 21st century already in the 1990ies, so to say.

In Estonia, people like to joke that global warming wouldn’t be too bad, but in reality the summers would remain cool as they are with autumn and winter becoming longer, rainier and stormier – effects that will translate to loss of economic potential. It is worth mentioning that this constitutes a vicious circle with the lack of snow and sea ice further reducing the lengths of winter, which will eventually translate into more rapidly increasing sea level.

Estonians have decided to wait for orders rather than acting themselves

If this alone will not prove to be motivating enough, it should really be the missed opportunity of being a major actor in a sort of a global Energiewende. In a similar way as Estonia is today helping other countries become digital thanks to innovative systems that can also be implemented in big economies, the same pattern could have been followed for green energies.

What is missing is a public support and a team spirit, which can only be achieved through debate and discussion. Seeing the lacking media coverage for the biggest, and as we know now, the most successful climate conference in history, it can easily be said, that in this matter Estonians have decided to wait for orders rather than acting themselves.

I also asked an opinion from the local environmental experts. Silvia Lotman from the Estonian Fund for Nature noted that Estonia is geographically situated in a lucky place: the first and hardest climate change impacts have not hit us and at the same time we have managed to maintain our energy independence due to our own fossil fuel – oil shale. “So it is not very comfortable truth for us that we are causing climate change. But I see a lot of hope for change after Paris COP as many journalists and opinion leaders have turned to environmentalists with questions of how to turn the global agreement to our opportunity. I really hope that this way of thinking will start growing now in Estonia,” she said.

Ojars Balcers from Latvia’s Fund for Nature agrees that involvement of the public is very important as it is the only way to advance to the 21st century economy of production and innovation. Nevertheless, the importance of EU co-operation can not be understated in order to guarantee energetic independence of the Union.

Balcers also reminds that whereas ambitious goals are important, we should already reach for the low-hanging fruit – discussion about natural resource productivity and the efficiency of energy use, heat and power losses, and their role in reducing our external energy dependency. Perhaps we simply need to explain it intelligently?

“The driver’s seat to the 21st century green economy is empty and Estonia could make a good candidate to fill in that seat.”

Last December, an agreement on climate policy to be signed by 195 countries was announced at the COP21 with many parties congratulating the fact that finally we are all working together. But are we really?

Furthermore, as Balcers points out, the driver’s seat to the 21st century green economy is empty and Estonia could make a good candidate to fill in that seat. With the cards played right, this could turn out to be an excellent booster to the economy due to improved efficiency and further need of developing and improving new technologies. Co-investing in green energy projects as windmills can put people work together, therefore strengthening communities and further advancing civil society. And well, the idea of leaving a slightly better world to the next generation isn’t too shabby either.

The opinions in this article are those of the author. Cover: Cold day heating in Estonia. The plant is running on oil shale (courtesy of Wikimedia Commons).

Sören Tiitsmann is currently preparing an MBA in International Business in Paris after obtaining an undergraduate degree in Asian Studies in the Paris Diderot University. Having also lived in Japan, Sören believes that cross-cultural communication cannot be undervalued – with open borders being the key to a better world.