Manan Anwar, a Tallinn-based expat, is concerned about the rising cost of living in Estonia – so much so that he shared his experience from visiting various cities in Europe and then comparing the living costs there with Tallinn in the “Expats in Tallinn/Estonia” Facebook group to initiate a discussion; Estonian World republishes his post in a lightly edited format.

I’ve been thinking about it for a very long time and I really want to put it out. I have been living in Estonia for the past four and a half years and I believe, based on wages to expense ratio, Estonia is an extremely expensive country to be in. (Unless you’re in a highly demanding field like IT). Here’s what my experience is based on. 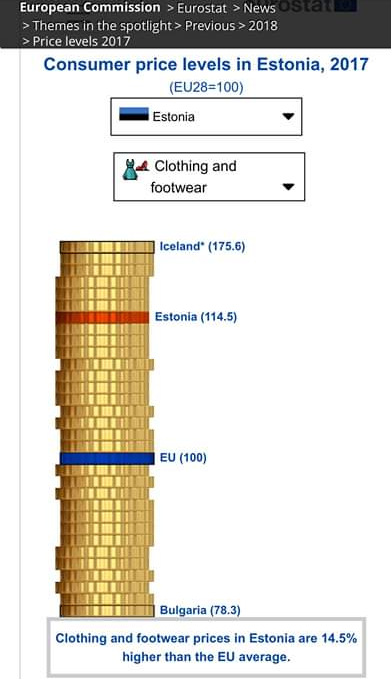 1. Clothing and shoes. It’s statistically proven to be more expensive than the European average. I have seldom bought clothing and shoes from here. Sports and winter clothing are actually cheaper in Scandinavia.

2. Groceries and food. From my anecdotal experience from shopping for groceries in both Germany and UK, the prices are almost the same or more for fruits, vegetables and household items. There have been some posts on the “Expats in Tallinn/Estonia” Facebook group, which also broke down the prices for individual items and, I believe, it was also picked up by news outlets.

3. Books. My biggest gripe, books in Estonia are generally at least 30% more expensive than in Western Europe; you can compare the prices for some newest titles on both local and international books stores. If you add the shipping costs, it becomes almost the same price as here. A book “The subtle art of not giving a f*ck” is €19.95 at Rahva Raamat (an Estonian bookstore chain – editor) after discount, whereas at Amazon Germany it’s €12.89. If you buy dozens of books a year, this cost goes up to hundreds of euros.

4. Electronics. Again, a lot more expensive than in other countries, for example, Germany. I bought a PS4 Pro and I paid €70 more for the same model from a shop here than if I had bought it in Germany.

5. Eating out. It’s slightly cheaper here compared with many other countries, for example, Sweden – but not by a lot. Since there isn’t much competition here, the quality of food isn’t that good and for the same quality of food, the prices are very much comparable between Estonia and Scandinavia. Germany, for instance, has a lot more variety, quality and cheaper food (possibly because it’s a larger market).

6. Housing. Probably up to until five years ago, rents were in line with the salaries, but now the difference between Estonia and Western Europe – and even Scandinavia – has shrunk a lot. This can easily be checked from the housing websites.

8. Gyms. From what I have noticed, gyms are also very expensive in Tallinn. A myfitness gym (an international gym chain – editor) membership costs almost the same as in Solna, Stockholm, for example.

How can people just shrug this off?

How is it that a country with a third of average salary than most of Western Europe can have a purchasing power like this? This isn’t just my personal observation. I have spoken to dozens of students and expats and have asked them about comparative pricing, and they all tell me that, based on the wages/expenses’ ratio, Estonia is extremely expensive.

I am genuinely curious about this and I really want to understand if there is an actual problem that can be explained by economists or there is just systematic oppression by companies and people aren’t complaining? Which, in turn, really boggles my mind. How can people just shrug this off? Is this acceptance of injustice a relic of the Soviet past?

Also, Estonia is my home and I want it to get better. That’s the reason why I want to understand it.

A proper debate is needed

After I posted this on the Facebook group, the post generated a flurry of debate. A few very good reasons were brought forward, for example, a smaller population results in retailers having to bring smaller stocks, which, in turn, results in smaller profit margins. Many people commented, saying they agreed with at least some of the points mentioned above but disagreed on others.

In all actuality, it is very hard to get objective data to either support or refute this claim since products can vary so much. One of the reasons for putting this out here is also to bring it to the attention of people in responsible places. People who can actually do something about this issue. Because, whether you agree or not, the truth of the matter is that Estonia is definitely not a cheap country anymore: consumer goods have lower quality, similar or more prices as Western Europe and a third of the wages resulting in a purchasing power that is ludicrously low.

It’s about time this topic comes into limelight and is properly debated. Otherwise people will continue to emigrate till only a narrow band of highly specialised IT people are left in Estonia.

The opinions in this article are those of the author. The cover image is illustrative (Shutterstock).

Manan Anwar did his masters in design and engineering from the Tallinn University of Technology. Currently, he is working as a mechanical design engineer at Stoneridge Electronics. In his spare time he likes to do improv theatre and write his blog. He can be reached via email.