Designer and developer Peedu Tuisk has come up with the idea of making the Tallinn TV tower and the Helsinki-Espoo TV mast taller so that they could be visible from both capitals.

Estonians and Finns are close relatives, we’re both Finnic peoples, speaking Finnic languages. We can almost understand each-other, but not quite, leading to funny misunderstandings. We use the same tune for our anthem and we helped each other in the wars for independence.

By 2017, an estimated 100,000 Estonians were working in Finland and, during the same year, Finns made approximately 1.7 million overnight trips to Estonia. Recently the topic of a tunnel connecting our capitals has become more serious, giving hope for a potential twin-city metropolis emerging with the combined populations of over 1.5 million people. Simultaneously, we’re moving towards further digital collaboration.

While departing from the Tallinn airport on an evening flight, it’s been surprising how visibly close Helsinki’s city lights look at night. They’re right there, just barely hidden behind the Earth’s curvature. But what if we could always see how close our capitals really are to each-other? How might it change the social dynamic between our peoples if we could simply glance at the horizon and see that our friends and tribemates are right there, over the sea. 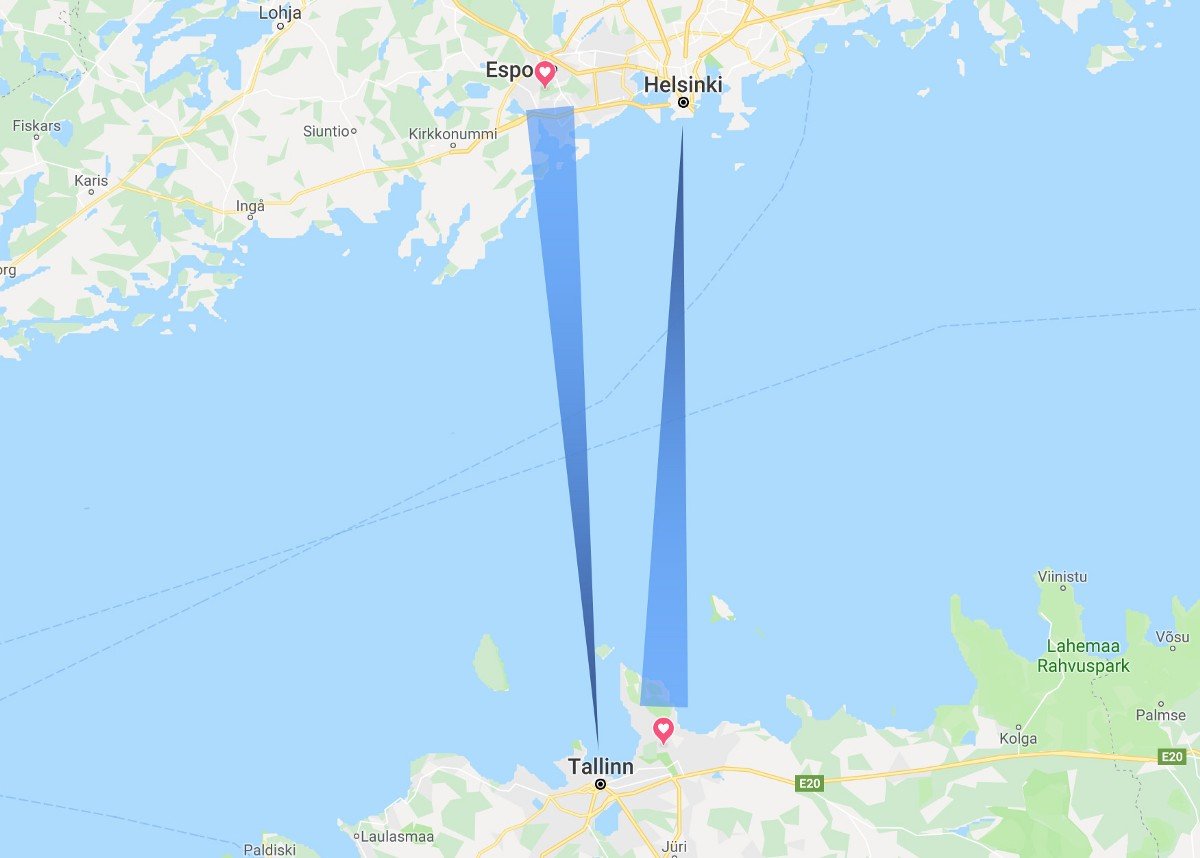 Tallinn and Helsinki are separated by about 80 kilometres (50 miles) of water, the Gulf of Finland. That’s too far for making out any of the city lights from ground level. However, on both sides of the coast there’s a tall structure.

Using the colours of the Estonian and Finnish flags

The Helsinki-Espoo mast is the same controversial one that transmitted TV signals during the 1980ies that reached northern Estonia, providing the Soviet-occupied Estonians a window to the West through Finnish television. Back then, the mast acted as a metaphorical beacon of light for Estonians. And the Tallinn TV tower is the first thing Finns see when arriving on a ferry, acting as a lighthouse. 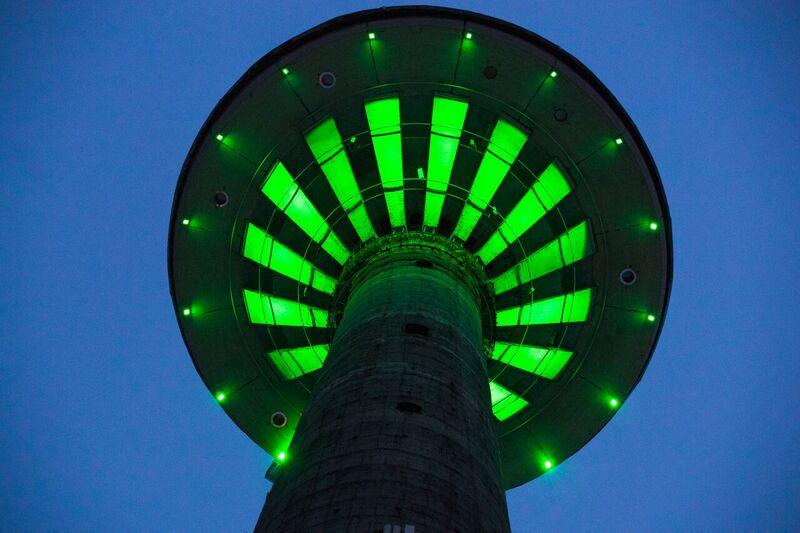 If these two structures had just slightly taller antennas on top, both lights could be visible at night from each side of the coast. Perhaps they could even use the flag colours for lights. A blue and white combination on the Finnish side and a slightly different shade of blue, black and white shining on the Estonian tower. A variety of colours could be used for special and solidarity events.

Normally, the lights remain behind the curvature of the Earth and hidden from our line of sight, but luckily the atmosphere can create a refraction effect, same as a straw visibly tilting in a glass of water. If we account for the atmospheric refraction under the standard atmospheric conditions, we can calculate how tall the two structures would need to be for us to see the lights from our capitals most nights. 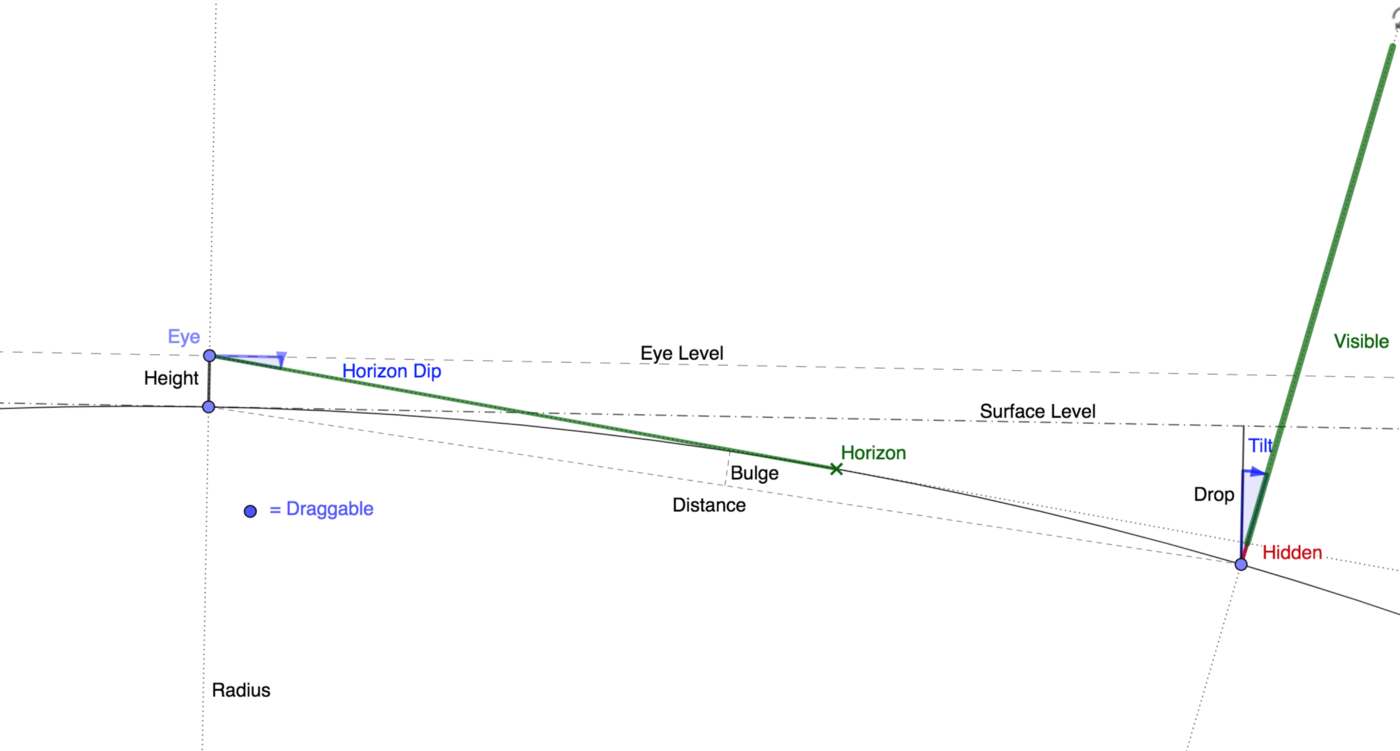 The distance between the capitals and the structures is about 80 kilometres. If a person stood on a pier by the sea, at a height of about three metres (ten feet), the masts would have to be approximately 427 metres (1,401 ft) tall without taking the atmospheric refraction into account and about 361 metres (1,184 ft) with the atmospheric refraction accounted for. However, the average altitude of our capitals is higher.

The average altitude is 17 metres (56 ft) in Helsinki and nine metres (30 ft) in Tallinn. So, if a person stood at about 10 metres (33 ft) from sea level and looked at the horizon at night, the lights on top of the masts would need to be at about 370 metres (1,214 ft) without the atmospheric refraction and only 309 metres (1,014 ft) with the refraction effect accounted for. That’s even lower than the current height of the towers! And indeed, during some special weather conditions, the Tallinn TV tower is actually visible from Helsinki’s higher points. But, unfortunately, the weather conditions are not always so perfect. 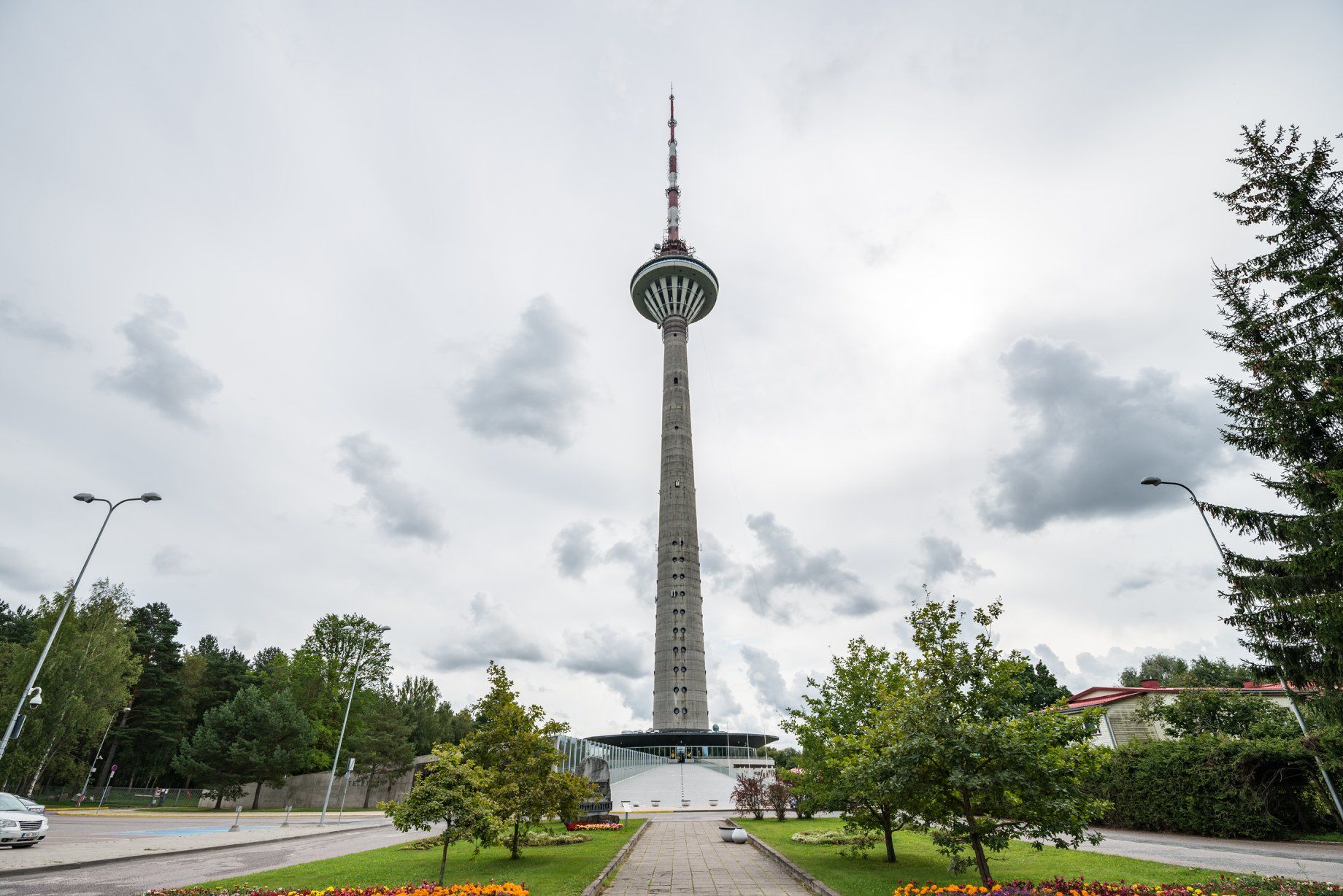 The red lights on the top of tall structures are the Aircraft Warning Lights, these are traditionally red or strobing white. There have been exceptions, so it’s not inconceivable that a combination of blue and white could be used, with the strobing white version at the very top, to represent our flag colours. But most likely it would be best to keep them as red.

This is just a concept, I’ve tried to keep the calculations correct but if a mistake has been made, please feel free to point it out in the comments and I’ll make the corrections.

The name for the concept could be “FinEst Lights”.

Cover: The Tallinn TV tower. The article is cross-posted on the author’s personal blog on medium.com. The opinions in this article are those of the author.