East, West, North or South? The notion of geographical space is always subjective. 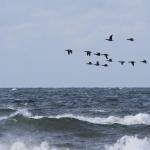 What we view as North or East constitutes South or West for those living respectively further North or further East. However, in most cases mental geographies are very conscious constructions, and geographical space is no longer simply formed by spatial boundaries, but rather becomes a construct in people’s heads. The idea of any particular space is thus culturally and morally loaded. Ultimately, mental geographies function also to create a sense of (common) identity.

In the case of the Baltic Sea region, and the Baltic Sea more generally, the ideas of Nordicity and Northerness often dominate the discourse. Both concepts, although clearly linked to the idea of the North, have different connotations and historical affiliations. Whereas the idea of the North was constructed to demark the North from the South and Northerness can be seen as simply deriving from it, the concept of Nordicity is a product of the Cold War days and the East-West division. The North, in traditional mythology of various ancient civilisations such as the Greeks, the Romans but also the Chinese, traditionally referred to the periphery, a cultural and economic backwater. This notion only changed over the last few centuries.

The term Nordic, on the other hand, brings about associations with the political North and with organisations such as the Nordic Council that was founded by Sweden, Denmark and Norway in 1952. Today one may refer not only to Denmark, Finland, the Faroe Islands, Greenland, Iceland, Norway and Sweden as Nordic, but also to Estonia and even Scotland. Thus, the concept of Nordic and the North have been somewhat reunited.

But, as ever, everything really depends on your perspective…

After all, Northerness, the Idea of the North, and Nordicity, are all simply concepts in people’s heads. Just as the idea of Eastern Europe was, according to some explanations, born only during the Enlightenment to give a name to what was perceived to be the spatial gap between Europe and the Orient.

Within what we would commonly call Northern, or North-Eastern Europe, lies the biggest spatial imagination of all – the Baltic Sea, surrounded by the Baltic region.

And this is where the problem begins: Who is Baltic? Who is Nordic? And do these terms complement or exclude each other? When talking about the Baltic region, we can either refer to the entire Baltic Sea Region or exclusively the three Baltic states – Estonia, Latvia and Lithuania. After all, some historians such as Andres Kasekamp would argue that the “concept of the Baltic states” is a construct as a result of a particular historical narrative. Or shall we perhaps include Finland? After all, Finland was considered a fourth “Baltic state” prior to the Second World War, while nowadays Finland is undeniably regarded as Nordic. The term Baltic states (or States?) in itself may occasionally cause plenty of confusion — whilst it might only denote Estonia, Latvia and Lithuania, it could theoretically also refer to all states bordering the Baltic Sea.

Even the term Baltic Sea is one — which is solely used in English; it occasionally causes confusion as the Germans, Swedes and Danes call it eastern sea (Ostsee in German or Östersjön in Swedish), whereas Estonians call it Läänemeri which can be translated as western sea.

According to historian David Kirby, the term ‘Baltic World’ should not solely refer to the three Baltic States, but to the entire Baltic Sea region. However, some perceive the Baltic Sea area as a historic region, and the political and economic changes of the 1990s also created a need for a new name to be found, one that would help reach beyond the old east-west division.

That gave rise to a number of alternative spatial concepts that accompanied the redefinition of post-Cold War Northern Europe. Some of the most widely known examples are the idea of Yule Land and the Amber Gateway model.

The current Estonian president Toomas Henrik Ilves coined the idea of Yule Land in 1998. It came to signify a region where the word for Christmas originated from a common root; this would include Britain, Sweden, Denmark, Norway, Finland and Estonia, but exclude countries such as Russia, Germany, Lithuania or Latvia. Interestingly, the idea of Yule Land reflects some recent Estonian foreign policy efforts to position itself as Nordic.

It remains questionable how much impact those spatial images and imaginations really have. Nevertheless, they remain important for the creation of common identities, which in return may play a role in determining further (political) action.

Anna-Cara Keim is a freelance writer and photographer based in London. She is editor-in-chief and founder of Crossing the Baltic, a blog-style magazine about the Baltic Sea Region (www.crossingthebaltic.com).

2 thoughts on “Anna-Cara Keim: Mental geographies and identities in the Baltic Sea region”