Abdul Turay is a British-Estonian political columnist working for Estonia’s leading national newspaper Postimees. After living and working in Estonia for so many years, he published his first book “Väike Valge Riik” (“A Small White Nation”) in December 2012 (the English version is due this fall). The book deals with issues relating to Estonia’s fast road to capitalism and the current, as well as future challenges that this road has brought to the country.

We have been discussing with Abdul for some time about collaborating on some articles on Estonian World. It is therefore admittedly with a slight embarrassment that we finally got around to it only because of a marginal Estonian far-right politician who recently came up with racist comments against immigrants – rare even for a country which is still becoming accustomed to accommodate people from different cultures, after so many years behind the Iron Curtain. This week, Estonian weekly Eesti Ekspress invited Abdul to debate with an aforementioned politician on the issue. Afterwards, Abdul found some time to answer our questions about life in Estonia and the recent debate. We have also republished Abdul Turay‘s letter to Estonian Public Broadcasting, highlighting the reasons for agreeing to debate on this controversial topic, despite his initial reluctance.

Abdul, first of all, what brought you to Estonia? 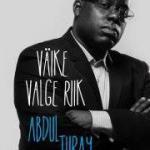 I came to Estonia for family reasons. It was a difficult challenge and a big risk, because I had to take a huge pay cut when I came here. The company I worked for, a Russian Latvian company, turned out to be dodgy. They weren’t paying staff members, so I quit on the principle. My wife was terrified, I had given up a well paying job in England to be unemployed in the Baltics in the middle of the worse recession in living memory.

What has been your general impression about the developments in Estonia and do you think that it’s heading in the right direction?

A difficult question to answer. When I first came to Estonia I thought it was a kind of paradise, a winter wonderland. My reasons for coming have changed over the years. I am more aware of the daily grind that most people go through to get by.
I

What do you think should be different?

Drivers should stop at zebra crossing. I will never get used to that.
I

Have you ever experienced any racism in Estonia and in what form?

You have fallen into the trap of asking about race. I am not sure I am even qualified to answer that question. I can only speak for my own experience not for others, and since I am not part of any black community in Estonia, I can’t speak for the community. There have been a few incidences, but it only came to blows on one occasion; I won.
I

What do you think could be done more to avoid ignorance about people from different cultures and races?

Again the trap. I am not qualified to answer this question. I know what every other Briton knows, which is that some communities assimilate well and others badly. A lot of it is based on language.
I

Is there anything negative from the UK experience, based on multicultural society, that you would like to change – or Estonia could learn from it?

Yet again the trap, multiculturalism means different things to different people. People confuse race with culture. If you tell an Estonian that a Jamaican is more culturally similar to a white Englishman than they are, they don’t understand that. But this is clear to us, Brits. Jamaica was colonised by Britain and the mother country has been kind of colonised by Jamaicans for the last 60 years. We share cricket, the English language, the legal system, school uniforms, reggae music, Anglicanism and Levi Roots (Levi Roots is a British-Jamaican reggae musician, television personality, celebrity chef, businessman and multi-millionaire – Editor).
What could be more English than cricket? Muslims play cricket, Estonian don’t. Even Bin Laden’s children, growing up in the former British colony of Pakistan, played cricket. Estonians don’t even understand the rules.
I

What is your opinion in relation to recent troubles in Sweden? And how would you respond to claims by some politicians (incl. Angela Merkel) that “multicultural society has failed”?

I am definitely not qualified to comment about the riots in Sweden. I am not Swedish, nor to live in Sweden, I only know what I read in newspapers and given how the riots in England were portrayed in the international press, I am not sure the coverage is accurate. As to multiculturalism I refer you to the answer above.
I

Considering the recent statement by far-right politician Helme, do you think that there’s something deeper to tackle in Estonia – or is it really just an ignorant statement from a marginal politician?

I debated him and he backpedalled significantly, he went from “kui must, näita ust” to agreeing to have black people in his party. What he said was racist, but that doesn’t mean he is. He does appear to have a disgust for Black Africans – a lot of people do, even other black people. Africa is poor, people despise poverty. Whether that disgust extends to all black people, I don’t know.
I think that I understand him – he will deny it, but his views are really all about money, most things do come down to money (or love). He dislikes anyone poorer than him, or any country poorer than Estonia. He dislikes Africa most of all because it is the poorest.
He has a hard time accepting that there are a lot of people in Britain and the other Western countries, including Black people, who unfortunately feel the same way about him – a poor Eastern European.
I
I

This is not a news article, but it is news.

You heard it here first on ERR (Estonian Public Broadcasting English portal – Editor). On Monday June 3, I will debate Martin Helme, the leader of the Conservative People party. The article will be published in Eesti Ekspress, and filmed. You can read more about the outcome of the debate on this portal and elsewhere.

For those of you who don’t know, Martin Helme is the chap who said: “Kui must, näita ust” (If black show the door) which translates well as “if you’re black get back”. He has argued this dictate should form the basis of Estonian immigration policy.

It saddens me to have to do this debate for more reasons than one. I trained as a reporter, I want to write the news, I like to write the news, I don’t want to be the news. I guess it’s a dilemma a person faces when he goes to a place where he doesn’t look like everybody else. Instead of seeing the attractions, he becomes the main attraction.

I am sure that the other English language writers in Estonia won’t mind me saying this. Myself, Scott Diel, Justine Petrone, and a couple of others, do not have agendas. We just want to earn a living for our families, the same as everybody else. We are put in this interesting and sometimes uncomfortable position where we are expected to act as unofficial ambassadors for various things.

In my case I have been obliged to represent my country, my Queen at the time of the Royal wedding, my ethnic group, and even my gender. I had written about men’s rights, then came the call to go to women’s conferences where I had to face off against a ton of angry feminists. As someone pointed out, an Estonian writer would would be skinned alive, if he had written what I wrote about feminism.

Then there’s the issue of race. A casual reader or just someone who can’t read Estonian might assume that’s all I write about. The opposite is true, I deliberately avoid writing about it. I am just not interested, I have to write for my audience. My audience are not black. This is why when I first started writing, a lot of people thought I wasn’t a real person. Here was a black Briton writing about Estonian politics – “How could that be?”

In my book “Small White Nation” out in Estonian and out in English this August, I decided I have to deal with race in the first chapter. It would have been intellectually dishonest not to mention it at all, for the rest of the book I moved on and never mentioned it again.

Other people won’t let it go though. Everybody who has interviewed me, falls into the trap of asking about race. I get invited to conferences to speak about race. I write articles in this portal and other places which have nothing to do with race, and people comment on my race.

And so it was that I got a call for Eesti Ekpress to debate Martin Helme about his unfortunate comments. I really don’t want to do it, really I don’t; but this guy hates everybody. After talking it out with some friends, I felt I had no choice.

I will talk in English because I don’t want to give him an advantage, and he will speak in Estonian for the same reason. The debate will be moderated.

I have heard that Martin Helme is a superb debater, but I am ready for him, bring it on.

20 thoughts on “British-Estonian political columnist Abdul Turay: “A Jamaican is culturally more similar to an Englishman than an Estonian.””