Conductor Eri Klas worked with over 100 symphonic orchestras in 40 countries during his lifetime.

Maestro Eri Klas, who has died at the age of 76, was one of the most well-known Estonian conductors. Loved both at home and abroad, he worked with over 100 symphonic orchestras in 40 countries during his lifetime, and played a major part in the early career of composer Arvo Pärt.

Born in 1939 into an Estonian Jewish family, Klas was introduced to music by his mother Anna Klas, who was a well-known pianist. He graduated from the Tallinn Music School in 1959 and studied under the Estonian composer and conductor, Gustav Ernesaks, at the Tallinn Conservatory (now Estonian Academy of Music and Theatre). Klas continued his studies at the Leningrad (now St Petersburg) Conservatory as a student of Russian conductor Nikolai Rabinovich and at the Bolshoi Theatre in Moscow under Boris Hajkin.

During his career, Klas conducted more than a hundred symphony orchestras in forty countries from Iceland to Australia and Japan to the US, including the Berliner Philharmoniker, Opéra de Paris SO, London BBC SO, the Hague Residentie-Orkest in Europe, the Cleveland Orchestra, the Chicago SO, the Boston SO, the Los Angeles Philharmonic, the Detroit SO, the San Francisco SO, the Washington National SO, Tokyo SO, the Sydney SO, the Adelaide SO and the Melbourne SO. 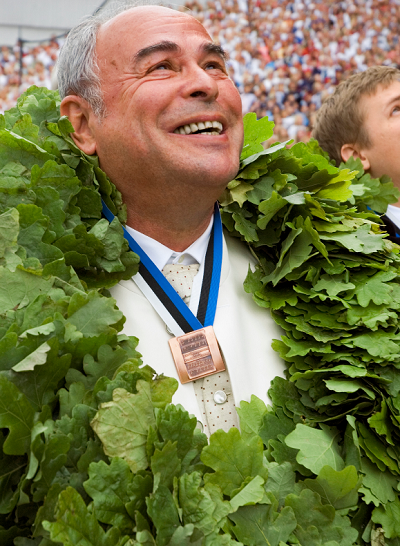 Klas worked with many world renowned artists, such as Gidon Kremer, Tatjana Gridenko, Natalja Gutman and many others. He also played a major part in the career of composer Arvo Pärt, with whom they remained life-long friends. Pärt’s now world-famous “Tabula Rasa” was composed at the request of Klas, who asked Pärt to write a piece to accompany Alfred Schnittke’s Concerto Grosso, which was scored for two violins, prepared piano, harpsichord, and string chamber ensemble, for an upcoming concert. The piece was dedicated to violinists Gidon Kremer and Tatjana Gridenko, and Eri Klas. Kremer premièred “Tabula Rasa” in Tallinn on 30 September 1977, with the Tallinn Chamber Orchestra, conducted by Klas.

In Estonia, Klas was a popular figure. In his younger days, he sang in a male trio, which performed on the Estonian national television. Always seemingly approachable and warm person, while very outspoken, he was often invited to chat shows. His friends characterised him as an extremely decent and honest man who always had time for everyone and enjoyed the company of others. For many years, Klas conducted choirs at the Estonian Song Festival and he was the artistic director of the Birgitta festival, the music theatre festival in the historical ruins of Pirita (Saint Birgitta) Convent in Tallinn. Klas was also an UNICEF Goodwill Ambassador.

Klas is survived by his wife, Ariel, whom he married in 1992, and daughter Diana from his first marriage, which ended in divorce.