Japan’s Nikkan Sports newspaper has stated that Estonian powerhouse Baruto aka Kaido Höövelson, who won the January 2012 tournament, has retired from sumo aged 28.

Baruto, who joined sumo in 2004, was one of only two Estonians to join professional sumo, and became the first blond-haired wrestler ever to reach sanyaku and beyond. He shot to fame in 2006 when becoming the first wrestler in over 40 years to take the second division championship with a perfect 15-0 score. 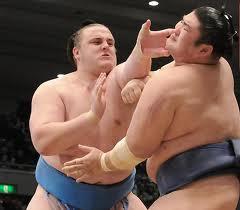 Alas, injury problems — particularly to the knee — soon began to set in, causing him to yo-yo between the top and second divisions for the best part of a year.

In 2009, it finally seemed as though he had conquered the demons of injury, frequently hitting double figures in an ultimately successful push for Ozeki status that included his first win over Hakuho in January 2010. Ozeki privilege was conferred in March 2010 when he finished second to Hakuho with a truly extraordinary 14-1 performance — losing only to the tournament winner himself.

He went one better in January 2012, going unbeaten for the first 14 days before losing to his nemesis Hakuho again, and stated in his tournament-winner’s interview that yokozuna was his goal. But just as his ultimate dream seemed set for reality (he was far ahead of Harumafuji in the promotion race at that time), the same knee problems returned to haunt him. Successive kyujo drove him out of the Ozeki rankings, and only a last-ditch win against Ikioi in January spared him demotion to maegashira.

Alas, his injuries became such that he was unable even to take part in recent tournaments, and failure to enter this one would seal his demotion to makushita — the unsalaried level — something deemed truly unthinkable even a year ago.

“My sumo career has been unusual and overall very successful. Even more than the titles and awards, I value the people that the sport introduced me to and there are a lot of them. I love Japan and the Japanese culture that has developed me as a person and given me opportunities to learn to know myself and the world better,“ Baruto said in a press conference, according to the Estonian Public Broadcasting.

He added that when in Japan, he always felt the support of Estonia. “The interest of regular folks, and also the professional and respectful interest of journalists, was pleasant. All in all it was perhaps the biggest motivator as I worked in Japan, but home is in Estonia.“

Höövelson was born in Väike-Maarja, Estonia, but grew up in the nearby Rohu village in current Laekvere Parish. His family owned a cattle farm and he became accustomed to hard physical labour as a child. His father died when Höövelson was sixteen years old and he worked as a nightclub bouncer to earn a living.

He played basketball as a teenager and also won a national judo championship in Estonia. Höövelson was introduced to amateur sumo when he was a little boy. His judo coach, Riho Rannikmaa, and an official from the Kagoshima Prefecture Sumo Association, Kazuo Kurazono, encouraged him to join the professional sport. Due to the restrictions on foreigners entering sumo, the only stable with a place available was Mihogaseki.

He was given the shikona or fighting name of Baruto, a reference to the Japanese name of the Baltic sea, and made his professional debut in May 2004. He moved very quickly up the rankings, reaching the jūryō division after only eight tournaments (tied for the third fastest rise to sekitori status since 1958 when the current six-tournaments-a-year format was adopted) and compiling a record of 41–8 on the way.

Baruto won the jūryō division March 2006 honbasho tournament with a perfect 15–0 result. This was only the fourth time ever that a jūryō wrestler had won the championship with such a record. He was the first to achieve this since Kitanofuji who ultimately reached the top yokozuna rank, in 1963. As a result of this performance he was promoted to makuuchi, the highest division, for the first time in his career in May 2006.

It is likely that Baruto could have achieved a more rapid rise to the top division, were it not for him suffering from appendicitis in November 2005. The resulting absence from the tournament sent him back down to the third highest makushita division temporarily. Despite this, his rise to the top division in two years is equal to the second fastest ever.

In February 2009 Baruto married in Japan Elena Tregubova, a 26-year-old Russian from Vladivostok who he had met four years earlier. In 2012 Baruto received the Estonian Order of the White Star, 3rd Class.