A former Estonian military officer and his father have been found guilty of committing treason by spying for Russia.

The court in Tallinn, Estonia, on 11 February found the 38-year-old Deniss Metsavas, a former major in the Estonian Defence Forces, and his father, 65-year-old Pjotr Volin, guilty of treason for selling classified information to the Russian military intelligence service, the GRU.

According to the verdict, Metsavas passed information to the GRU for a decade. Volin worked for the Russian military intelligence for about half as long.

The court sentenced Metsavas to 15.5 years in prison; his father received a six-year sentence.

Metsavas and Volin were arrested by the Estonian Internal Security Service on 3 September 2018.

Selling not only Estonian, but NATO secrets

According to the Estonian Prosecutor’s Office and the Internal Security Service, both men had forwarded classified information and state secrets to the GRU for the past five years and received payments in return – Deniss Metsavas received just 20,000 euros from the Russian agency.

Metsavas not only traded the Estonian trade secrets, but also forwarded classified information concerning NATO (Estonia has been a member of NATO since 2004).

For example, Metsavas had a detailed knowledge on the Tapa-based Estonian Artillery Battalion and its defence plans during a theoretical military conflict; it is feared that he passed this information to Russia.

Metsavas was born in Tallinn to the ethnic Russian family during the Soviet occupation in Estonia. He became an Estonian citizen in 1990 – a year before the country officially regained independence from the Soviet Union – and started serving in the Estonian Defence Forces as a conscript in 1998. He was employed in the defence forces in 2000, after which a successful career followed – by the time of his arrest, he was promoted to the rank of major and his last job was at the headquarters of the Estonian Defence Forces, no less. He was about to start a new job in the Estonian Defence League, the unified paramilitary armed forces of Estonia. 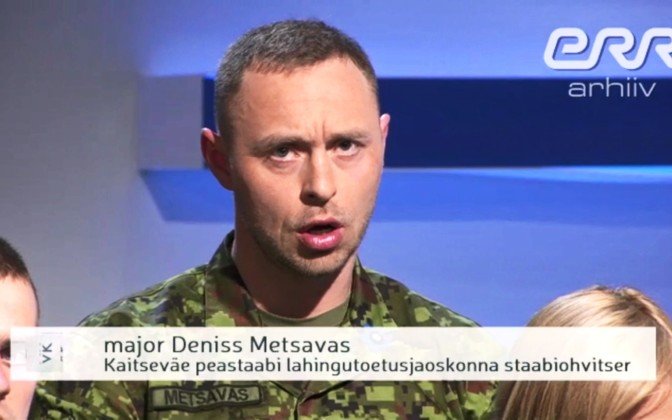 Metsavas’ arrest came as a shock to many in Estonia because he was one of the “poster boys” of the presumably successful integration of the Estonian Russian community. Here was a man born into an ethnic Russian family, yet who spoke perfect Estonian and served in the country’s defence forces.