1 April marks 15 years since Estonia joined NATO: an event that gave Estonia the greatest security guarantee ever due to a close defence cooperation with 28 allies.

The Estonian prime minister, Jüri Ratas, said the day Estonia joined NATO is a day of allies. “For forty years, we were forced to look from the outside into a world behind the protective shield of NATO, so desirable and unattainable. In 2004, when we and other countries became members of NATO and the European Union, it was like a happy reunion.”

“15 years ago, when (then-president – editor) Lennart Meri hoisted the NATO flag in his backyard, he said Estonia will never be alone again. His statement remains true. We see it from the every-day support of our independence from our allies. In last year alone, we hosted nearly ten thousand soldiers from allied countries,” he added.

According to the minister of defence, Jüri Luik, Article 5 of the NATO treaty has provided Estonia with the greatest security guarantee in the world, stating that an attack on us is an attack on all allied countries. “Our membership was achieved due to years’ worth of hard work of politicians and state officials. The moment the door to NATO cracked open, we were 100% ready to join,” Luik noted. “Considering Russian aggressions, it is easy to imagine what would happen if we were not a member of NATO.”

At the Warsaw Summit in 2016, NATO decided to position allies’ military groups to Estonia, Latvia, Lithuania and Poland. The unit in Estonia is led by the United Kingdom, with whom the country has long-standing historical connections. As of spring 2017, the defence forces of France, Denmark, and Belgium have served in Estonia. 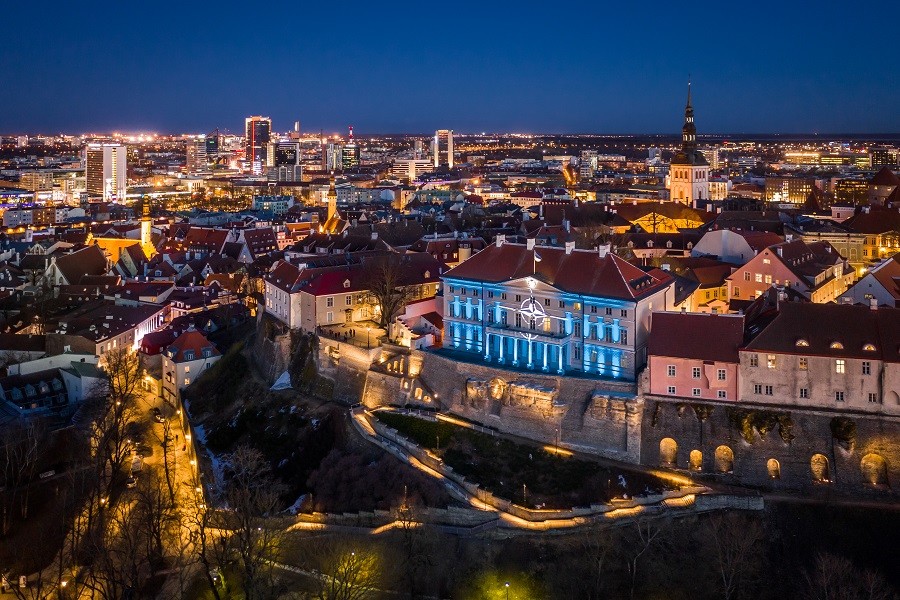 To celebrate the 15th anniversary of Estonia joining NATO and the 70th anniversary of the founding of the alliance, the flag of NATO will be displayed on the Stenbock House, the prime minister’s office, from 29 March to 4 April.

Based on the public survey conducted in the autumn of 2018, 76% of Estonians support the country’s membership in NATO, including 91% of the Estonian-speaking population.

Cover: NATO flag projected to the Stenbock House, the seat of the Estonian prime minister. Images by Kaupo Kalda.