According to the agreement signed at UN headquarters, Estonia will regularly inform the organisation of military observers and staff officers willing to serve in a peacekeeping mission in 2013-2016. 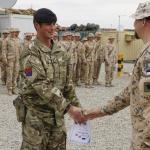 Marran said Estonia wants to be a more active member of the United Nations. “In connection with the end of the Afghanistan mission next year, western countries’ interest in UN missions has grown. Estonia too is looking for ways to continue contributing to global security after Afghanistan, and peacekeeping missions offer a good opportunity for this.”

Estonia will increase its contribution to peacekeeping gradually, the secretary said. “The plan is for five Estonians to take part in three missions in 2016,” he said.

Under the agreement concluded on  Friday, Estonia will join the UN operations database, UN Force Link, that provides an up-to-date overview of units and equipment ready for deployment to a mission.

Currently one Estonian military member serves in the UN observation mission UNTSO in the Middle East, and talks are in progress for dispatching two more service members there at the end of the year.

For Estonia, UNTSO is the longest-lasting mission – observers of the defence forces have been participating in it since 1997. Estonia also plans to contribute two personnel to the UN peacekeeping force in Mali, the establishment of which was approved at the end of April.